Since 1990, global GDP has grown 271%. At the same time, the number of people living on less than $5/day and people going hungry have also increased. 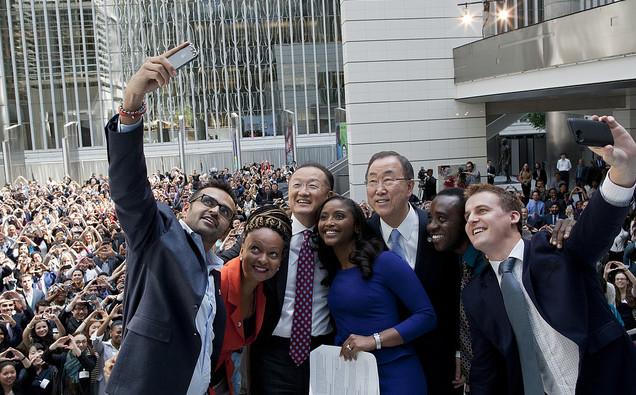 Hope sells. Not quite as well as sex, but certainly better than despair. Politicians know this, marketers know this, and the politicians and marketers in the organisations concerned with global poverty know this.

There is a line, though, that separates real and meaningful hope from marketing and spin. At the upcoming UN General Assembly, we are all about to be told some stories as part of a big of the “world’s largest advertising campaign“ by the UN, NGOs, governments and large corporations to sell us on the new global plan to tackle poverty. It’s up to each of us to determine whether these stories are full of hope we can believe in or just a big serving of marketing and spin.

The plan, called the UN Sustainable Development Goals (SDGs), is going to be launched this month. Heads of State from all over the world will descend on New York to formally sign it. There will be fanfare, celebrity endorsements, concerts, and photo ops, and a general air of “let’s all celebrate what we’ve achieved so far and what we can do together next”.

The “what we’ve achieved so far” part of the equation is summed up in the idea that global poverty has been halved since 1990; testament – so the official logic goes – to the great success of the last big poverty plan, the Millennium Development Goals (MDGs). And this leads effortlessly to the “what we can do together next” part, which, largely on the basis of this progress, is to eradicate poverty “in all its forms, everywhere” by 2030.

It’s an almost irresistible story. What craven, miserable misanthropes could possibly take issue with it?

Well, that depends on how true it all is. If it’s not true, we should all take issue with it and withhold our support. And there is, unfortunately, every reason in the world to question the deployment of such grand hope to sell this particular plan.

There are few things more important when it comes to the collective endeavour to rid this world of mass poverty than whether we believe the world is heading in the right direction, which is what the official story wants us to believe. If we believe that, we are more likely to be politically passive, thinking that things are basically in hand.

This isn’t an academic question; 4.1 billion people currently live in poverty, on less than $5 a day, and almost everyone on earth will be affected in some way or other by the SDGs. The least we should expect from the people selling it to us is truth and honesty.

We made this video to highlight three particularly important questions we think need asking by as many people as possible.

1. How is poverty created?

There is an assumption buried deep in the logic of the SDGs that mass poverty is essentially a natural condition that occurs in the absence of any action to overcome it. But this assumption isn’t accurate at all. It simply takes what feels like common sense about poverty at the individual level and presumes it works for countries and, indeed, the whole world over time.

But is that right? Is it true that everyone is born with equal access to the means of ensuring they never live in poverty? Do power dynamics between countries have any part to play in who gets rich and who doesn’t?

Consider this: there has been a globalised economy for at least 400 years (depending on how you define it). In that time, some parts of the world have increased their wealth exponentially – notably those who have created and run systems of control and domination stretching around the world in the form of empires, slavery, and colonialism and, in more recent years, trade deals and structural adjustment programmes.

It’s hardly a strange idea that those with the money make the rules, and this is a truth that is writ large in the global economy today, and has been for practically all of the last 400 years.

If it seems to you that there is a lot more to mass poverty than what the individual has control over, then you might want to question what the SDG framework’s denial of this reality says about its promise to end poverty by 2030.

2. Why is growth the only answer?

Right now, economic growth sits at the root of the SDG plan to tackle poverty. The SDGs are aiming for at least 7% per annum in least developed countries and higher levels of economic productivity across the board. Goal 8 is entirely dedicated to this objective.

This feels intuitive and logical. If economic growth equals more money and poverty equals a lack of money, then economic growth equals less poverty. It stands to reason. But now consider this: since 1990, global GDP has increased a whopping 271%, yet both the number of people living on less than $5 a day and the number of people going hungry has also increased – by 10% and 9% respectively.

Add to that the wage stagnation across the developed world and increasing inequality both within and between countries pretty much everywhere, and the shakiness of this basic logic becomes evident. Aggregate economic growth does not translate into less poverty.

Maybe this would only be slightly problematic were it not for the second part of the problem. The imperative for every country, every company, and every individual to grow their material wealth all the time is destroying us. The consumption-driven mechanisms we use to achieve growth have us locked on a path to ruin by encouraging us to treat finite natural resources as if they were infinite and prioritise the growth of the money supply over everything else. The perceived moral imperative for economic growth actually contradicts the laws of nature.

It is further notable that in recent years, 95% of all income from growth has gone to the richest 40% – which leads us on to the third question.

But for every $1 that is given in foreign aid to the global south, several times that figure is taken out by other means (as much as a gargantuan 18x by some measures*) – most notably rigged trade deals that benefit the most powerful countries and corporations, debt repayment on debts already paid off many times over, and massive tax evasion and other forms of corruption committed by political and business elites and facilitated by the large and growing web of tax havens. In the grand scheme of things, who’s actually developing whom?

The answer to this question will also affect your opinion of the SDGs. They don’t have a lot to say about this dynamic and in fact riff pretty heavily on the basic idea that it’s the Global North that’s the generous party.  They do acknowledge both the vast level of illicit finance and that the global financial system is relevant to their project, but they capture their level of concern in vague statements about the need to “enhance global macroeconomic stability” through “policy coordination”. There are no specific responsibilities for anyone or any actual targets.

This is a very rich world, filled with determined, smart, compassionate people and mind-bending technology. Everything we need to tackle poverty and climate change is at our fingertips. We just need to add to this mix of possibilities the honest and credible intent. Honest and credible.

We treat the goodwill of people lightly at our peril. Every time we over-hype a claim today, we create the conditions for disillusionment and political disengagement tomorrow. It is short-termism of a very damaging kind. Although it may feel harsh to question the idea that the SDGs can eradicate poverty by 2030, we owe it to ourselves and those that will come after us to do just that.

Martin Kirk is the head of strategy for /The Rules. Follow him on @martinkirk_ny.

This article was originally published at FastCoExist.