A few weeks into his presidency, John Magufuli’s moves towards free education, anti-corruption and belt-tightening are already recalling memories of Julius Nyerere. 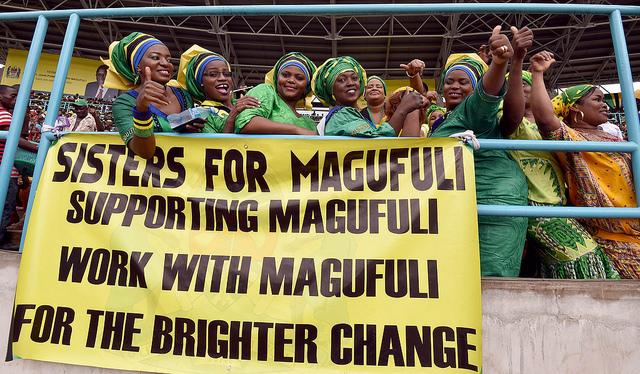 In 1967, professor Ali Mazrui opened the world’s eyes to a new political phenomenon: Tanzaphilia. In his now famous article in Transition, he defined this concept as “the romantic spell which Tanzania casts on so many of those who have been closely associated with her”. For Mazrui, many observers, especially well-meaning Western leftist intellectuals, were prone to succumb to Tanzania’s magical charms.

Part of this allure came from the fact that while many other countries in the region were struggling under autocratic regimes, in January of that year, Tanzania’s ruling party TANU had passed the Arusha Declaration, President Julius Nyerere’s political magnum opus. The Declaration charted Tanzania’s commitment to self-reliance, freedom, Pan-Africanism and Ujamaa (African socialism) with a major aim being that “the Government eradicates all types of exploitation, intimidation, discrimination, bribery and corruption”.

Tanzaphilia, however, was as much a result of this ideology as by the character of Nyerere himself, who believed strongly in practising humility. Even as president, he queued when waiting for services in banks, post offices and during elections. He allegedly refused a presidential motorcade to guide him through the congested streets of Dar es Salaam. And in one of the most famous episodes of his early presidency, he cut ministerial, presidential and higher civil service wages to the irritated surprise of many cabinet ministers.

Nyerere could not avert the eventual failure of his increasingly authoritarian Ujamaa villagisation policies during the late 1970s and 1980s, and under his successor, Ali Hassan Mwinyi (1985-1990), economic liberalisation programmes gained traction. Alongside these economic transformations, a whole repertoire of socialist rhetoric, symbols and values were revised, and despite the ruling party’s reverent use of “˜hammer and hoe’, a neoliberal wind of change was in the air.

Yet the spirit of Arusha never fully vanished from Tanzania’s political discourse. Nyererism and Ujamaa as a set of moral principles faced a resurgence in the 2000s, and for the last decade or so, posing with wheelbarrows and spades has again become an expected performance for Tanzania’s political cadres.

With the recent election of Tanzania’s new president Dr John Pombe Magufuli, who was sworn in on 5 November, this trend has reached new heights.

As Minister for Public Works, Magufuli’s reputation as a technocrat and man of action bestowed him with the nicknames “˜Bulldozer’ and “˜Jembe’ (hoe). For his election campaign, Magufuli successfully used socialist aesthetics, hard work, and a hands-on mentality under the slogan Hapa Kazi Tu! (Work and nothing else!).

Now, only a few weeks into his presidency, Magufuli seems to be living up to his promises with some clear echoes of Nyererism. To many people’s amazement, for instance, the former chemistry teacher recently ordered the immediate halt of “unnecessary foreign travels” for government officials, pointing out that with the TSh356.3 billion ($160 million) spent on government air travel, the country could build some 400 km of desperately needed tarmac roads.

Magufuli has also said he will re-introduce free primary and secondary education, as originally devised by Nyerere. The president proclaimed that by January 2016, school fees will be abolished in an attempt to boost education levels among the country’s marginalised youth.

Then, on 24 November, Magufuli made an executive decision to do away with Tanzania’s annual Independence Day celebrations and instead use the money for road construction. Meanwhile, money saved from MPs’ swearing-in celebrations were used to purchase new beds for Muhimbili Hospital in Dar es Salaam.

On the face of it, these deeds are symbolic, but they could be much more. They could indicate a silent renaissance of the spirit of Arusha and a more equitable economy in Tanzania. Magufuli’s actions are being eagerly discussed on social media under the hashtag #WhatWouldMagufuliDo with often humorous and romanticising comments on his Nyereresque austerity measures. But beneath this light-hearted trend lies a genuine longing for political accountability and for a new political culture that dispenses with the usual pomp.

I wanted to buy a cake for my wedding then I asked myself; #WhatWouldMagufuliDo? pic.twitter.com/Q23quKgWwu

Needed to take a hot shower,buh electricity too expensive then I thought #whatwouldmagufulido pic.twitter.com/ZKbDHYl2zB

In neighbouring Kenya, where a corruption crisis has forced President Uhuru Kenyatta to reshuffle his cabinet, Magufuli’s bold manoeuvres have not gone unnoticed. A wave of “˜Maguphoria’ seems to have swept across East Africa, making Tanzania again the epicentre of progressive political aspirations and adds a pinch of utopia for those who want to see politics in their countries being done differently.

Nonetheless, change cannot come overnight, and Magufuli is bound by existing structures, treaties, political institutions, and not least by his own party Chama cha Mapinduzi. But the president’s dynamic social offensive against graft, wasteful public spending, and poor education as a prelude to his presidency might herald an innovative new direction in Tanzanian politics and lay the groundwork for what could become a “˜Magufuli doctrine’: Work hard, don’t live beyond your means, and listen to the people.

Magufuli faces many challenges. After the dubious annulling of election results on semi-autonomous Zanzibar last October, resentment runs high among opposition politicians and the island’s residents. Together with his Zanzibari deputy Samia Suluhu Hassan, Magufuli will have to make great efforts to resolve the crisis and make Nyerere’s legacy of political union last.

Back on the mainland meanwhile, where the opposition has made allegations of fraud around the elections, equally fundamental changes are looming. On the campaign trail, for example, Magufuli promised to review the failed privatisation of government farms and companies in the 1990s, and, if necessary, re-nationalise such enterprises. Now in office, he seems keen to stick to his word and recently gave a 30-day ultimatum to private investors to present status reports on their businesses or face compulsory nationalisation.  Although Magufuli is no revolutionary in the traditional sense and while it will be some time yet before his presidency can be properly judged, the invocation of a “˜New Arusha’ under Magufuli and a renaissance of its values of togetherness and equality is not misplaced.

In Ali Mazrui’s words, Tanzania’s success in creating something extraordinary for its population “ultimately […] depends upon a continuing compatibility between an intellectual leadership and a popular sense of mission in that remarkable African country”. And while it is too early to say anything definite about what Magufuli’s administration will and will not do for political and social reform, it seems that Tanzania has again cast its soothing spell of “˜Tanzaphilia’ upon the wider region. Let’s hope it lasts.

Hanno Brankamp is a DPhil candidate in the School of Geography and the Environment, University of Oxford. Follow him on Twitter at @SpreeLumumba.