Beyond the poverty of poverty reduction: the case of cotton

Africa’s cotton producers still seek a better trade deal. But as the WTO Ministerial meeting convenes in Nairobi, the poverty hurdles are much higher than just trade barriers. 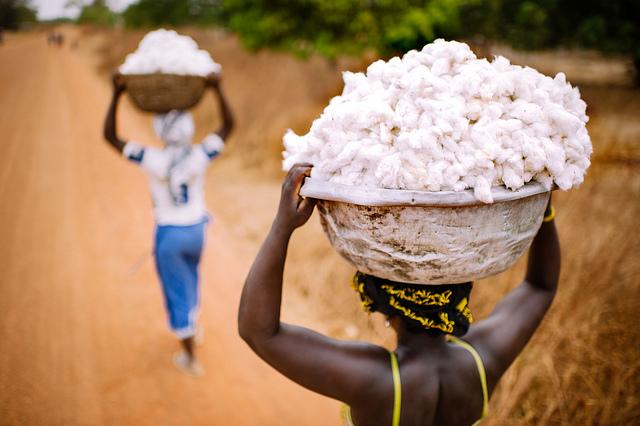 Cotton weaves the lives of tens of millions of Africans together. From South Africa to Tanzania and across the continent to Senegal, many African farmers continue to put cotton in the ground each year. These planters remain convinced that tending this difficult and thirsty crop can yield more cash than they would otherwise be able to earn. And this faith persists despite evidence suggesting the fibre is often spun up with impoverishment and food insecurity.

As Africa continues to reap ambiguous benefits from cotton, the plight of the West African countries that depend the most on cotton exports – the so-called Cotton Four (C-4) made up of Benin, Burkina Faso, Chad and Mali – has received considerable international attention.

For instance, at the 2003 World Trade Organisation (WTO) Ministerial meeting in Cancun, the cotton trade issue was front and centre.

In April of that year, the C-4 had issued their Sectoral Initiative in Favour of Cotton which called out the US and EU for providing lavish subsidies to their wealthy cotton farmers and factory-style cotton operations. The African grouping demanded liberalisation and compensation for the surge of artificially cheap cotton that the US and European systems continued to generate, undercutting the incomes of the C-4’s small family farms.

The issue of cotton was not forgotten even as negotiations stalled, and more resources were allocated to monitoring cotton trade policies and more cotton-specific development aid was disbursed. African cotton became the WTO’s feel-good cause célèbre, and free traders considered it to be Exhibit A in the supposedly ethical case for a more liberal world economy.

However, lost in all of this action and attention was a darker reality. As an agenda to foster Africa’s economic liberation, the Cotton Initiative was always a damp squib.

This is not to say that the narrow focus on trade and aid at the WTO has not yielded benefits. The C-4 Initiative has assuredly reduced some of the violence done to Africa in the name of cotton. But we need to look to a different ‘C-4’ to better understand and redress the broader forces and factors that continually knock African cotton back.

The continent’s future with this fibre will continue to be knitted up with poverty unless there are serious investments and rethinks on each of four ‘Cs’ that contribute to reproducing poverty everyday: commerce, contracts, credit and carbon.

On commerce, the European Union, parallel to the WTO, has made a considerable investment in facilitating a Pan-African effort to add more value to cotton. A strategic road map is now in place to help African governments coordinate their quests to do more spinning, dying, weaving and garment manufacture for regional and global markets.

Yet dispensing with the raw deals associated with exporting the unprocessed material in favour of a massive push for industrial-scale development could be socially and environmentally costly. Without care, the road map might simply foster the in-migration of shady sweatshops seeking lower cost locations than Bangladesh, Cambodia or Vietnam.

To avoid that nasty fate lessons ought to be gleaned from alternative approaches to economic transformation at smaller scales and from the emergence of new anti-poverty textile standards. On this ‘c’ of commerce, imagination and dreaming big are the new poverty eradication essentials. There is no reason why the Pan-African road map could not contribute to building the world’s premiere source for certified organic and fairtrade textiles and clothing.

The challenges facing the second ‘c’ of contracts in African agriculture are well-known. Many cotton farmers across the continent enter into contracts with cotton companies. Contract-based approaches can help farmers to take delivery of seeds, fertilisers and pesticides that they would not otherwise receive, and enable companies to secure supply.

But not all cotton buyers respect the sanctity of this set-up. Farmers that are induced to defect from their obligations and ‘side-sell’ their crops to interlopers for immediate cash are often rewarded with two impoverishing outcomes: reduced payouts and diminished reputations.

This moral issue nonetheless pales in comparison with the global morality crisis in the cotton futures market. Traders have alleged that cotton futures contracts were subject to active market manipulation in 2011. And regardless of the veracity of those claims, the principal cotton merchants have opposed the imposition of regulatory limits on their futures market positions.

When the big trading houses have pumped up their profits via the steroids of speculation and the cotton futures market has become more volatile, Africa’s farmers have paid hefty prices. Better regulation and international coordination in this area could yield anti-poverty dividends that equal or exceed those related to assuring the inviolability contracts on the ground.

Enhanced access to credit – the third ‘c’ – tends to be regarded as a poverty-reducing fundamental. But it is not a panacea. If the big agribusiness firms that peddle the latest high-tech cotton-picking technologies extended credit en masse across the continent tomorrow, there are no guarantees poverty would be reduced. Labour-saving tractors can retail at price points above half a million US dollars.

In this hypothetical future, newly indebted farmers or governments would have big incentives to farm cotton more extensively. The ramifications of this scenario for food security, and for jobs, communities and the environment, are troubling to say the least. And there is little to suggest that alternative allocations – such as the mass extension of credit for reinvestments in the health and wellbeing of donkey teams – would not yield more robust results on poverty.

Finally, we all know that the fourth ‘c’ – carbon – is at the forefront of global discussions on our common future. Cotton, when farmed using the conventional package of petrochemical inputs, is simply too carbon-intensive. Greater reliance on agroecology principles and methods to fix nitrogen and reduce pests can lower the carbon footprint of cotton significantly, and can also generate new sources of rural non-farm employment.

As Africa’s organic cotton farmers know, when they pool their on-farm resources to recycle nutrients and conserve soils, water and energy, they necessarily rely less on petrochemicals. Approaches to cotton that introduce complementary trap or fertiliser crops also tend to enhance ecological relationships and create new income streams and markets. Growing numbers of entrepreneurs are now committed to getting the carbon out of cotton. Their quest is a wellspring of green innovation and anti-poverty opportunity.

As the WTO meets in Nairobi from 15th to 18th December, the C-4 must be front and centre. But to move beyond the poverty of poverty reduction, decision-makers will need to embrace broader and deeper understandings of Africa’s cotton and poverty ‘problem’. Will they cotton on?

Adam Sneyd is an Associate Professor in Politics and International Development Studies at the University of Guelph, Canada. Follow him on twitter at @adamsneyd.