Through arrests of journalists and threatening speeches, the government is signalling its intent to repress Zimbabwe’s media. And it will likely get worse. 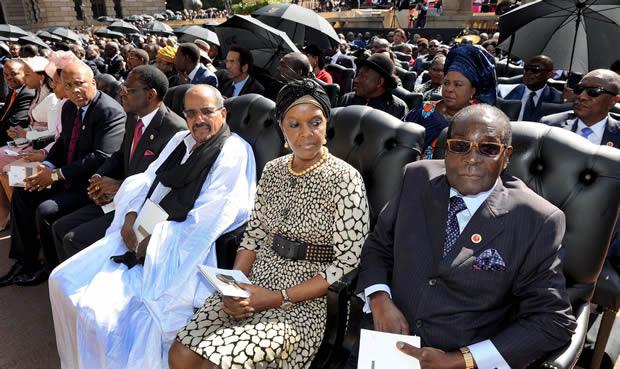 In recent months, the Mugabes have turned up the rhetoric against the media. Credit: GCIS.

In 2013, there was a brief but bright window in which Zimbabwe’s media were filled with cautious optimism that a more open environment might be beckoning.

A new constitution with an expanded bill of rights had been approved by Parliament earlier in the year, and the Minister of Information Jonathan Moyo – newly re-appointed after the ruling ZANU-PF’s convincing victory in general elections – made a point of visiting newsrooms to meet with journalists and publishers. An Information and Media Panel of Inquiry (IMPI) was established to gather a wide range of views on how to improve the operations of the media.

However, this new chapter and new hope has not lasted long. Just two years on, media houses are alarmed at the rate journalists have been arrested recently and are growing more concerned as the rhetoric coming from members of the government intensifies.

This October, President Robert Mugabe lambasted the privately-owned newspapers NewsDay and The Standard, referring to them as the “opposition press” and ‘”those rubbish papers”. This was followed up by Zimbabwe’s First Lady and head of ZANU-PF’s influential women’s wing Grace Mugabe who recently called journalists who had been critical of her “uneducated” and “foolish”.

And George Charamba, the Presidential Spokesperson and Permanent Secretary in the Ministry of Information, has further raised concerns by saying, ominously: “I will recommend most effective ways of controlling errant behaviour in the newsroom. So you will have a piece of legislation that seeks to restrain rather than to enable media practices.”

These loud and public critiques of the press have been backed up with action too. For example, Itai Dzamara, a journalist, human rights activist and critic of Mugabe, was bundled into an unmarked vehicle in March 2015 and has not been seen since. In November, freelance journalist Andrison Manyere was arrested for covering an opposition demonstration.

And reporters Angela Jimu, Edgar Gweshe and Privilege Musvanhiri have been detained by police in recent months whilst doing their jobs, to name just a few. Even state media journalists are no longer immune as demonstrated when the Sunday Mail’s editor and two reporters were arrested last month after publishing a story alleging senior police officer involvement in a poaching syndicate which has left more than 22 elephants dead.

Ramping up a clamp down

Zimbabwe’s ZANU-PF government has a history of clamping down hard on the media. In the early 2000s, for instance, when ZANU-PF’s political dominance was being challenged more than ever, critical news outlets were accused of being opposition mouthpieces and journalists were targeted.

The independently-owned Daily News was bombed twice – in 2000 and then again in 2001 – allegedly by individuals associated with the Zimbabwean military, while its editor was arrested repeatedly. This media repression continued through most of the 2000s, with journalist Edward Chikomba murdered in a particularly tragic episode in 2007.

In 2009, following the agreement of a power-sharing deal between ZANU-PF and the opposition MDC, the media enjoyed a slight reprieve, and some previously banned newspapers were allowed to re-open. However, since Mugabe romped to victory in the 2013 polls, there are fears that Zimbabwe’s government has reverted back to its old ways.

Once again, several senior officials are complaining loudly about what they claim are concerted efforts by the private media to tarnish the image of ZANU-PF while journalists are facing detention more frequently.

The government has also been suggesting a tightening of media laws to address what they say is a dearth of ethics and professionalism. Writing in his weekly column, Nathaniel Manheru, an anonymous writer who is widely believed to be the Information Ministry’s George Charamba, hinted that a cure for what he referred to as “unprofessional”, “hateful” and “confrontational” reporting was imminent.

This new state of affairs has left much of Zimbabwe’s media highly concerned. Ibbo Mandaza, director of the Southern African Political and Economic Series Trust and former publisher of the now defunct Daily Mirror and Sunday Mirror, even goes as far as to say that the current persecution of journalists has taken Zimbabwe back not just to a decade ago, but to the country’s pre-colonial era.

“Zimbabwe’s media is under siege. We have been taken back to the Rhodesian period,” he says. “The state is now ruling without being accountable to people.”

“There is too much censorship of the media, especially state-owned media houses,” continues Mandaza. “Look at the Zimbabwe Broadcasting Corporation – it is now like the Rhodesia Broadcasting Corporation (RBC). Everything broadcasted there is being censored by the state… We have a state which has come with a very strong law and order department to deal with any democratic voices.”

In Zimbabwe’s media environment today, there are growing echoes of the 2000s as the government’s rhetoric ramps up and arrests continue.

Many journalists are also awaiting with bated breath the possibility of new legislation, as being hinted at by high-level officials. It remains to be seen what that might entail, but some observers, such as Pedzisai Ruhanya, a media analyst based in Harare, believe the situation for Zimbabwe’s media may well get worse before it gets better.

“If you look at how the state has been at the centre of all the attack of journalists, it tells you that there will not be any changes, but journalists should brace for more difficult times especially 2018 [when elections will be held] which is likely going a tough contestation between ZANU-PF and opposition forces,” he says.