Moïse Katumbi and the Congo’s race for the presidency

The influential businessman and former governor of Katanga has taken an early lead in an aggressive race, but has he made his move too early? 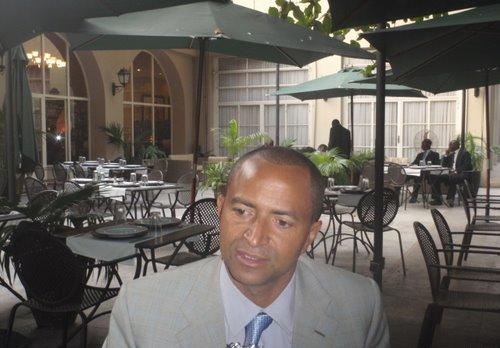 Could this be the DRC’s next president? Credit: Radio Okapi.

Moïse Katumbi has had an eventful and emotional few days since he declared his intention to run for president. On 4 May, the former governor of Katanga announced his candidacy on Twitter, and the next day found his house surrounded by police. Katumbi’s arrest seemed imminent, but eventually the police left their positions under pressure from MONUSCO, the UN peacekeeping mission in the Democratic Republic of Congo (DRC).

The presidential elections for which Katumbi intends to run are scheduled for 27 November, but it is doubtful whether they will actually take place. At this point, not many people believe that credible elections can be organised within the constitutional delays.

There are several reasons for this, but the most important is that the government has systematically withheld the funds needed by the electoral commission to organise the various phases of the process. This could be seen as a symptom of the government’s lack of ownership over its own elections, but it is actually closer to a boycott.

Over the last couple of years, the government has attempted several times to create the conditions to prolong the reign of President Joseph Kabila beyond the stipulated constitutional limit. In September 2014, for instance, Speaker of the National Assembly Aubin Minaku tried but proved unable to change the constitution. Then, in January 2015, the government again tried but failed to pass a new electoral law that would have delayed the elections by several years.

The only strategy that has worked so far is le glissement (‘slippage’) – that is to say, delaying the elections due to the government’s position that it is not possible financially or technically to organise them in time. Remaining in power by simply not organising elections.

It has become clear since around 2014, however, that Kabila has had difficulties in maintaining the superficial unity among the informal networks and interest groups that make up his regime. And particularly since September 2015, Kabila’s Majorité Présidentielle has been in a state of disarray.

That month, seven senior political figures – known as the G7 – were expelled from the ruling coalition after calling on the president not to cling onto power. Then, shortly after, the influential Katumbi announced his resignation from the ruling PPRD party. Meanwhile, anti-Kabila sentiment continued to grow in Katanga and Kabila’s relationships within his inner circle of power remained poor.

By the end of 2015, the possibility of this growing opposition managing to work together in a solid constellation was looking hopeful.  And different rapprochements between Kabila’s opponents crystalised in mid-December with the creation of the Front Citoyen 2016.

Nevertheless, the opposition is frequently targeted by the regime and subject to attempts to fragment the parties from within.

Amongst the opposition, Moïse Katumbi has increasingly been seen as the best placed challenger to Kabila since around 2014. As governor of Katanga from 2008 until 2015, when the province was dissolved, he was seen as successful and popular; he has built an economic empire as a businessman; and his looks, communication skills and money contribute to his ability to mobilise large crowds in what was formerly Katanga and beyond.

However, not everything is in his favour. It is not obvious that the Congolese electorate will want a third consecutive president whose roots are in Katanga; Katumbi’s wealth and the way he acquired it make him vulnerable to allegations and potential court cases; and the business community in the town of Lubumbashi not only complains that he is greedy but claims he used his political mandate to expand his economic empire.

Furthermore, Katumbi is still somewhat of an outsider when it comes to national politics. He has yet to prove he has the political skills and nerves of steel necessary to set up and lead the broad coalition it would take to really challenge Kabila (or his crown prince if he were to appoint one).

As it stands then, both the current regime and opposition fail to fully convince. Important politicians have left the ruling majority, others are suspected to be preparing their departures, while many of those who remain are competing with each other with impressive zeal.

The hardliners of the regime perhaps have the advantage currently, which is palpable in its public statements, in the media and in the growing repression of opposition leaders, dissidents and other critics, including in civil society and the press.

The opposition meanwhile still has to show it can make a difference and come forward with a coherent political constellation, centred around in a single candidacy. In December 2015, the Front Citoyen 2016 was established as a broad coalition for the respect of the Constitution, but for now the main merit of the group is the fact that it exists.

It does not have much of an active institutional life and strategic thinking is still being done in the headquarters of different opposition parties. Above all though, the opposition has yet to demonstrate a vision – a plan explaining what they will do in power if they obtain it.

At present, the political scene in Congo resembles a cycling peloton as the racers prepare for the sprint finish: hectic, fast, and with an awful lot of shoving. Everyone wants to position themselves as well as possible for the final straight, though whether the finish line is where it is meant to be – or whether it will be pushed back and back – remains to be seen.

In this jostling for position, Katumbi may find that he has taken the lead of the pack too early. The irritated reactions of fellow opposition leaders Vital Kamerhe and Félix Tshisekedi point in that direction. Meanwhile, taking pole position also means that Katumbi may have to deal with strongest headwinds of repression.

Indeed, on the very day Katumbi announced his candidacy, Congo’s justice minister announced an investigation into allegations that the opposition politician has recruited mercenaries, an accusation many believe is politically motivated. Furthermore, Human Rights Watch has reported that at least 27 of Katumbi’s allies were arrested in and around Lubumbashi between 22 April and 7 May.

“The recent developments in Lubumbashi come in the context of a broader crackdown against activists, opposition party members and others who have urged that presidential elections be organized according to the constitutional timetable”, said the organisation.

What will happen next in this complex competition for power is difficult to predict, but one thing that is certain is that the race is just getting started.

Kris Berwouts (Gent, 1963) has worked for a number of different Belgian and international NGOs over the past 25 years, focused on building peace, reconciliation, security and democratic processes. Since 2012, he has worked as an independent expert and writer on Central Africa.

The choice for the next African Union ...