Politics
Home›African Arguments›Politics›Nawal El Saadawi: “All people are mixed blood, the more mixed you are the better”

Nawal El Saadawi: “All people are mixed blood, the more mixed you are the better”

The iconic Egyptian writer speaks out about being ignored by “colonial capitalist patriarchal powers” and how today’s African women writers are leading a revolt. 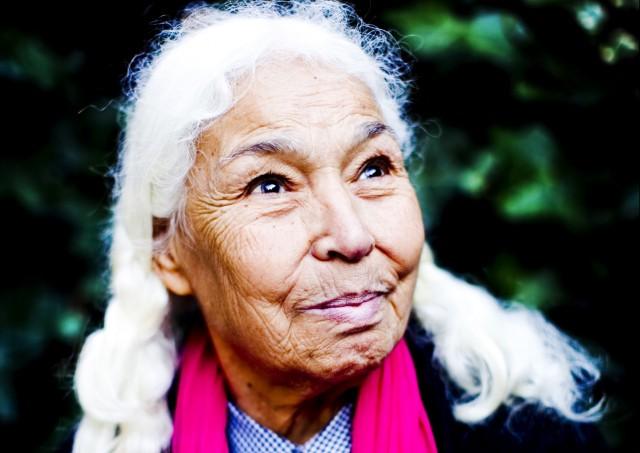 With a career spanning half a century and encompassing some 60 works of fiction and non-fiction, Nawal El Saadawi is today one of the Arab world’s and Africa’s most pre-eminent figures.

Over several decades, the 84-year-old Egyptian’s books have challenged the status quo of patriarchal, religious and capitalist structures. And the writer has developed an international reputation as a courageous activist who carries on questioning those in power in spite of the dangers that can come with it.

According to Saadawi, she inherited her rebellious side from her parents and paternal grandmother, and her willingness to speak out has been clear throughout her writing. In her many works, she has tackled a range of controversial topics such as female genital mutilation, sex work, violence against women, and religious fundamentalism. And she has explored these complex issues through both fiction – in the likes of Women at Point Zero, Searching, and God Dies by the Nile – and non-fiction – such as in Women and Sex and various memoirs.

As a feminist writer and activist, Saadawi has raised awareness around women’s rights globally, but she has had a particularly strong influence on the feminist movement in her home country and amongst young Egyptians.

“Before and after the Egyptian revolution [in 2011], young women and men worked hard to organise what they call today ‘Nawal El Saadawi Forum’,” she explains. In these monthly seminars, Saadawi’s books are discussed in detail, and through these events, she says, “younger generations are creating a cultural revolution”.

“I am critical of colonial capitalist racist patriarchal super powers”

Saadawi is thought of as one of the Arab world’s most prolific and prominent writers. However, seeing her solely as an Arab writer does a disservice to both her influence around the world and her own sense of identity.

Saadawi is critical of identity politics, which she says “is part of the colonial capitalist language and so-called post-modern ideas”. And she does not delineate between her different and multiple identities, saying she finds the notion of “pure identity (or pure blood)” as “racism to my mind”.

“My identity is not fixed,” she says. “It is not an iron jacket but it is changing and is multiple and multiplying. I have mixed blood from Africa, Asia and Europe till Iceland; from Ancient Egyptian polytheism to Hindu philosophy to monotheistic religions. All people are mixed blood, the more mixed you are the better.”

Nevertheless, when it comes to writing, Saadawi’s language of choice is decidedly Arabic. Her works have been translated into some 20 different languages, but she points out the inherent difficulties within any form of translation. “Creative writing has music in its language, and you cannot translate music without losing something”, she says.

Furthermore, Saadawi questions why so many writers are “forced to be read in English or French” and laments that “many famous African writers ignored their people and their local languages…to be recognised by world literary powers”.

“English or French writers are not forced to be read in Arabic or Chinese”, she says, adding that “there are billions of people in Africa and Asia not speaking English or French”.

The dominance of these two languages – which she attributes to the fact that “the colonial capitalist powers are mainly English or French-speaking” – is an issue Saadawi has long encountered herself. “I am still ignored by big literary powers in the world because I write in Arabic, and also because I am critical of colonial capitalist racist patriarchal superpowers”, she says.

This lack of recognition also extends to the realm of women’s writing according to Saadawi, who says: “African women writers like all other women writers in the so called Third World have been ignored by colonial capitalist patriarchal powers”.

Yet, times may be changing. 50 years after Grace Ogot’s Promised Land and Flora Nwapa’s Efuru were published, African women writers are receiving serious critical attention and could be said to be at the forefront of the literary scene on the continent.

Half a century after Saadawi started writing, this is as huge development, and one the octogenarian activist puts down to the fact that Africa’s women writers “are revolting today, along with all other oppressed people”.

Nawal El Saadawi will be headlining at the fifth Africa Writes festival in London on 2 July, reflecting on being a woman writer and on the challenges faced by women living in traditional societies.

Dr Zahrah Nesbitt-Ahmed is founder of the Bookshy Blog. She is a Human Geographer with extensive experience in gender, urbanisation and international development.

This piece has been published in partnership with New African magazine.