Why elections may be the only answer for South Sudan

The peace agreement won’t be implemented under the current leadership. And the escalating fighting in Juba highlights the danger of continued inaction. 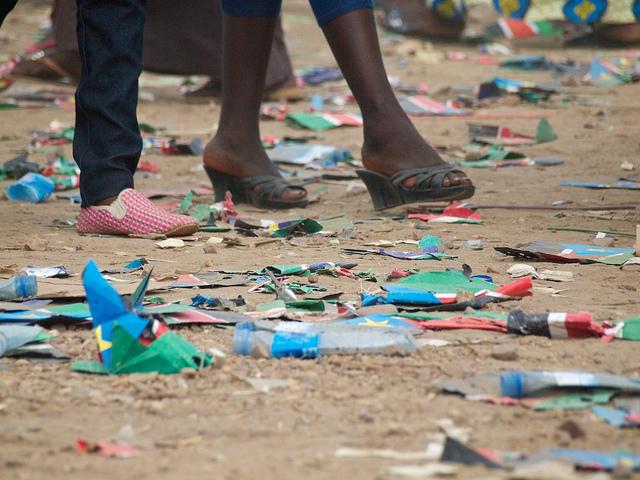 On the 5 year anniversary of its independence, South Sudan’s peace is looking fragile. Credit: Gregg Carlstrom.

Five years ago today, over 100,000 South Sudanese from all walks of life gathered at Dr John Garang’s Mausoleum in Juba, the nation’s capital, to celebrate the independence of their country from Sudan.

It was a dream come true for South Sudanese who had long suffered marginalisation and extermination at the hands of successive Northern regimes, which sought to Islamise and Arabise them.

As Hilde Johnson, former Special Representative on South Sudan to the UN Secretary-General, narrated in her recent book, South Sudan: The Untold Story, the civil war was avoidable but was inflicted upon the people by the irresponsible leadership and blind ambition of the chief protagonists: President Salva Kiir and his deputy (turned rebel leader, and now deputy again) Riek Machar.

After nearly two years of fighting, a power-sharing peace agreement was signed in August 2015. This led to a partial establishment of the Transitional Government of National Unity (TGONU). But South Sudan is still far from peace.

The implementation of the agreement has been slow and recently stagnated due to the lack of political will. The legislature and judiciary are yet to be reconstituted. Encampment sites for Machar’s forces in Greater Equatoria and Greater Bhar El Ghazal are still to be identified. And the issue of Kiir’s unilateral decree to divide the country into 28 states, in place of ten states recognised in the peace agreement, remains outstanding among others.

In the meantime, the economy continues to deteriorate, with inflation soaring to over 300%. Around the country, new militia groups have cropped up, such as the ones that recently attacked Raja and Wau. The tensions that led to the conflict in 2013 are building up again at a time the regional and international pressure that led to the signing of the peace agreement is waning.

And just yesterday, heavy gunfire rocked Juba and reportedly led to scores of deaths after a fight broke out between the guards while the president and the first vice president were in a meeting at the presidential palace. While the circumstances that led to the fighting are still unclear, this was just the latest deadly skirmish that the two forces have engaged in over the last few days.

The most obvious way out of these self-inflicted wounds is for the 2015 peace agreement to be sincerely and urgently implemented. But despite some encouraging signs recently that Kiir and Machar had reached a consensus on how to resolve outstanding issues, no meaningful progress has since emerged.

Furthermore, even if South Sudan’s leaders do demonstrate commitment to the agreement, the chance the reforms will actually be implemented are slim. The TGONU lacks the resolve to tackle the endemic corruption that has evaporated the trust of South Sudanese in their government since 2005. The security and justice sector reforms imagined in the agreement are unlikely to be commenced. And there is a limited chance the Disarmament, Demobilisation and Reintegration agenda will be moved forward.

Much of this impasse relates to the chicken-and-egg problem in South Sudan. That is to say, key reforms are essential to allow the country to recover from the poor governance it has endured for more than a decade; yet such reforms cannot be implemented without an effective and committed leadership. And assuming the current political elites will implement the necessary reforms would be profoundly naïve as the prevailing situation is essential to their grip on power.

Given their unwillingness and inability to effect change, continuing to impose the current coalition leadership on the country at this crisis moment may inadvertently trigger the disintegration of South Sudan. And as such, it is crucial to initiate discussions on other options for preventing total state failure. Instead of waiting to be awakened by massacres and humanitarian catastrophe again, we must pre-emptively consider a way to prevent “the war of all against all”.

Such a new approach could require abandoning the ambitious reforms envisioned in the peace agreement and instead initiating a minimal programme of action aimed, first and foremost, at restoring legitimacy to the country by holding elections within one year.

Fundamental elements of such a programme could include constitutional amendments that would trim down the excessive executive authority and guarantee essential freedoms.

It could also include placing the electoral body under the supervision of the international community for it to be fair and credible.

And it could further involve a role for the international community in providing basic funding to prevent the economy from collapsing. Because of pervasive government corruption, provisions could be made to have the bulk of this money flow through international and national NGOs and communities with the aim of minimising hunger and encouraging a people-led reconciliation process at the grassroots.

The only way forward

Since forming the transitional government, however, the leaders have shown no interest in solving any of the existential problems that face South Sudan. The aspirations of South Sudanese to live in peace and build an effective state have been shelved.

The international pressure that brought the agreement to birth could be redirected at moving its implementation forward. But if the leaders have no interest in the agreement, it is hard to imagine how it can be properly and genuinely implemented. And given this, it would be better if urgent alternative arrangements be made so that the country can hold elections within a year to regain a degree of legitimacy and new leadership.

If South Sudanese, whose future is being mortgaged by their leaders, join hands with the regional and the international community, such arrangements can be made.

At this point, this may be the only way forward. As the recent fighting in Juba underlined, any further inaction risks the disintegration of South Sudan.