After banning plastic bags in 2014, the government started a scheme paying people to collect the discarded waste, with mixed results. 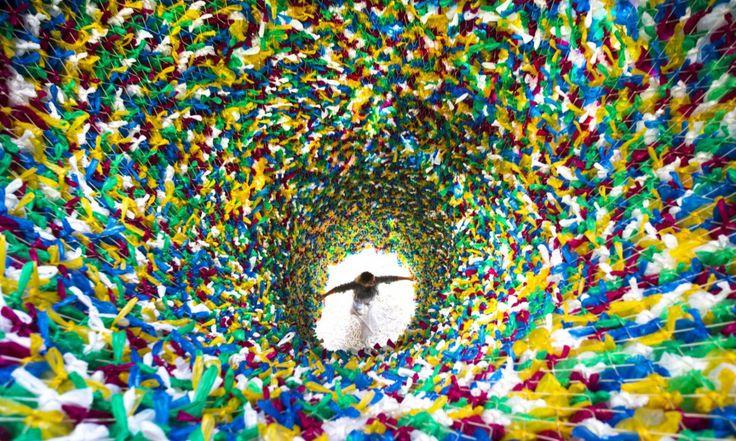 After graduating from university in 2010, Promise tried everything she could to find a job. She had worked tirelessly as a student, hoping that passing with flying colours would pave the way for a steady career post-university. But as the years passed, Promise, now 30, came to realise that politicians’ promise of immediate employment after graduating was a myth.

“I had wandered from office to office and agency to agency in search of work, just any work”, she says. “The reply was ever always the same: ‘We will call you when an opportunity comes up’.”

Promise became increasingly desperate to find employment in her home town of Bamenda in northwest Cameroon, until one day, she heard an announcement on the radio. The local council was publicising a new initiative whereby the government would give money to people in exchange for collecting discarded plastic bags.

In April 2014, a government ban on non-biodegradable plastic bags had come into effect. The intention was to reduce the millions of bags being used every day, which were clogging up waterways, creating an environmental hazard for animals and humans, and damaging soil fertility.

But many businesses complained that they had no alternative and a black market for the bags flourished. Despite the ban, plastic waste remained a problem and the government hoped that it could encourage people to clear it up by offering FCFA 10,000 ($17) for every kilogram collected.

On hearing the announcement, Promise saw an opportunity but hesitated. “At first I saw it as a joke, wondering how a degree holder like me could indulge in collecting waste in the city. I thought of what friends and family would think,” she says. But then, feeling she had nothing to lose, she plunged in.

Promise got much more efficient over time and says that by six months, she says she had collected 150kg of plastic, earning her FCFA 1.5 million ($2,500), an average of over $400/month.

Since its implementation, this collection programme has spread to seven cities and it is estimated that 100,000 kg of plastic was exchanged in 2015 alone. The project forms part of Cameroon’s environmental ambition to reduce its carbon footprint by 32% by 2035 compared to 2010.

However, while many have commended its successes, others have expressed concerns over its implementation. For example, Carolyn Bih Bongwa, Mayor of the Bamenda I Local Government Area, complains that the project lacked sufficient consultations with local actors.

Meanwhile, the main concern for many environmentalists is that the project simply doesn’t go far enough.  Tantoh Emmanuel, an activist who long called for a waste management initiative in Bamenda, claims the initiative is “too late and too little”. Fuchi Emmanuel, author of Understanding Your Environment, points out that non-biodegradable plastics constitute less than 5% of Cameroon’s pollutants.

Environmentalists emphasise that Cameroon is particularly vulnerable to climate change and has recently faced several extreme weather events such as droughts and monsoon rains, which have devastated fields, pastures and livelihoods. They insist that much more transformative measures across the board need to be effectively and successfully undertaken if Cameroon is to genuinely tackle the problem.

“We cannot be aiming at reducing carbon emissions by 32% and at the same time allowing multinationals to cut down trees at the rate they are now cutting in Cameroon,” says Emmanuel. “The tree planting project initiated by the former Minister seems to have come to an abrupt end. We have real environmental challenges and our manners are not helping matters yet.”

However, the plastic collecting initiative is more than just an environmental strategy. With unemployment high – and with jobs being lost since the ban on plastic bags – the programme is also aimed at providing young people with a way to gain an income.

Some of those who have heeded the government’s call have been successful like Promise. For example, Rachel Kinio, 23, who lives in Kumba, Southwest Cameroon, and holds a diploma in management and accounting, says she gathered enough capital through the initiative to start up a business buying and selling second-hand clothes.

But not everyone has been as lucky. Michel Saadeo, 27, from Baffousam recalls: “For four months I toiled day and night collecting plastic papers like a mad man. When I was certain I have got 50 kg, enough to enable me have a financial base, council officials told me after weighing and collecting the plastics that they have run out of money and were still waiting for central government to send more money… As I talk to you I am still waiting.”

While the programme might provide a small temporary income for some unemployed Cameroonians, it has not worked out for everyone, and critics insist that it is not a sustainable and lasting solution to the country’s high unemployment rate.

“Our policymakers are behaving as if government can continue to provide jobs for the thousands who graduate from our universities,” says Forbi Nchinda Simon, a member of Cameroon’s National  Assembly. “I suggest we begin serious reflection not only on the jobs of the future but also on the future of jobs in Cameroon. The mass of the unemployed and underemployed in Cameroon is in itself a time bomb”.

Both the long-term environmental and employment benefits of Cameroon’s experimental plastic collecting scheme are under question. But for now, the immediate effects of clearing up discarded plastic are apparent in urban areas. As Wilfred Mbacham, Associate Professor of Public Health Biotechnologies, before the programme was rolled out, “rain was the primary collector of such [plastic] papers…After torrential downpours, rain gathered them onto water ways and clogged the flow of most urban rivers and end up as a nuisance along the beach”.

Gwain Colbert is a Courage in Journalism award winner, promoter of fact-checking journalism in Cameroon, blogger for social change, and radio host living in Bamenda, North West of Cameroon.