What’s at stake in Ghana’s too close to call election?

Pollsters disagree on who will win in a presidential race that has been more about personalities than policy. 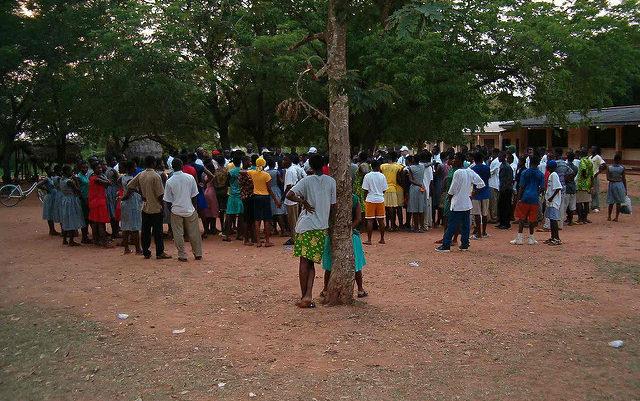 Ghana’s presidential elections have typically been won by narrow margins, and the upcoming vote looks to be just as close. Credit: Erik Cleves Kristensen.

Ghanaians head to the polls tomorrow, on 7 December, to elect a President and representatives to fill the 275-member House of Parliament. In the presidential race, seven candidates are competing, but it largely a two-horse race between President John Dramani Mahama of the ruling National Democratic Congress (NDC) and leading opposition candidate Nana Akufo-Addo of the New Patriotic Party (NPP).

While the ruling party is hoping Ghanaians endorse their “Transformation” agenda, which promises a move towards an era of prosperity and security, the NPP’s message is premised on “Change”, envisioned to offer opportunities for all irrespective of background.

Results of opinion polls have generally been mixed. While the Economic Intelligence Unit and Political Science Department of the University of Ghana have predicted a victory for Akufo-Addo, reputable Ghanaian pollster Ben Ephson suggests Mahama is set to win with 52.4%. It seems the results will not be clear until the nearly 16 million registered voters actually cast their ballots.

What is at stake?

The 2016 general election represents another important milestone in the country’s democratic journey since 1992, which has seen six elections and two alternations of power between the NPP and NDC. While set to build on these advances, the stakes in the upcoming election are high.

The previous elections in 2012 generated unprecedented levels of anxiety. After the official results declared Mahama president by a narrow margin, the opposition NPP filed a petition at the Supreme Court to annul nearly 4 million votes that the party alleged were tainted by irregularities. The hearing of the petition, which ran over eight months, stretched the resilience of Ghana’s peaceful democratic temperament and exposed some of the deep-seated frailties within electoral institutions – particularly regarding the accuracy of the electoral register and professionalism of polling officials.

The court eventually upheld the results, but the negative impact the petition had on public confidence was captured by the 2014 Afro Barometer Survey, which pointed to a fast deterioration in trust of the Electoral Commission and other state institutions. The upcoming elections represent an opportunity to reinvent the bedrock of Ghana’s democratic politics.

The 2016 elections may also be the chance to stem growing cynicism about the prospects of democratic politics to deliver developmental dividends. In recent years, many analysts have watched in disbelief the dismantling of the “virtuous cycle” of democratisation, good governance, and stable growth that was once associated with Ghana. Indeed, this election is taking place at a time of economic setbacks, a deteriorating anti-corruption climate, dwindling opportunities for employment and wealth creation, and an uncertain global climate that has adversely affected revenues from gold and oil.

While many Ghanaians remain proud of the country’s democratic credentials, they are growing frustrated about their failure to increase the amount of money in people’s pockets and stem the tide of corruption.

The campaign season has produced a spectacle of aesthetic ingenuity and quixotic promises in equal measure.

As demonstrated by the commissioning and inauguration of various projects, which have peaked in the last four weeks, President Mahama is touting his government’s achievements in infrastructural development with a promise to build on them to pursue further growth in human capital development, employment opportunities, infrastructure, and effective governance.

On the other side of the campaign, the NPP has accused the Mahama government of inflicting severe economic hardships on Ghanaians due to what Akufo-Addo and his team identify as mismanagement, corruption, and incompetence. The opposition party has urged Ghanaians to change course for a new vision based on effective management of the economy and an ambitious industrialisation drive under a “One District One Factory” programme and Industrial Development Fund that would create jobs and prosperity.

Apart from the Progress People’s Party (PPP), led by a popular businessman running for the third time, most of the smaller parties, including the People’s National Congress, Convention People’s Party, National Democratic Party, and an independent presidential candidate, have barely enjoyed any visible presence in the campaign.

Amidst the deafening chorus of “change” from the opposition and “continuity” from NDC supporters, the upcoming election has seen slogans upstage any serious engagement with issues. For many voters, most of the party manifestos came too late. Apart from the PPP, which released its policy statement in July, the NDC and NPP launched theirs less than three months to the election. Furthermore, unlike in 2012, when there was as series of presidential and vice-presidential debates, this time around the events were undermined by no-shows.

Nevertheless, deeper scrutiny of the NPP and NDC manifestos suggests that decades of democratisation and donor-driven development have eclipsed any ideological differences between the two major parties. Although the NDC prides itself as being aligned with the tenets of social democracy, Mahama is counting on a stabilisation programme underwritten by the IMF and the private sector to deliver his plans for jobs and prosperity. On the other hand, the NPP, which is often linked with market-driven development, has rolled out various welfare programmes, with a promise to restore allowances for teacher trainees and nursing students that were rolled back by Mahama.

This growing convergence on policy and ideology means that the main question of interest in this election has turned to who is more competent and less corruptible, and the parties have according been launching smearing campaigns and insults at one another.

The ruling NDC has touted the personable character (and in some instances good looks and height) of Mahama, contrasting it with what they present as the arrogant and less peaceful posture of Akufo-Addo. The President has also come under attack from civil society groups for stoking ethnic divisions in Northern regions, where he hails from, after he accused the NPP of using Northerners to win power only to dump them.

On the other hand, the NPP has tagged Mahama as “incompetent” and “corrupt”, and instead projected what they consider as Akufo-Addo’s incorruptibility and emphasised his running mate’s purported handle on economic debates.

The growing personalisation and regionalisation of campaigning in this year’s elections have given cause for concern with a rise in vitriolic attacks in media discussion and sporadic violence across the country.

However, perhaps the main source of anxiety has surrounded the preparedness and capacity of the Electoral Commission to deliver a free and fair election. In the run up to the election, there has been a strong spotlight on Charlotte Osei, who took over as Chairperson of the Electoral Commission last year. In its past, the EC has received plaudits for its performance, but the fallout from 2012 included urgent calls for reforms to restore trust and credibility. After the Supreme Court’s ruling in 2013, a Special Reform Committee was set up and wrote a report recommending a wide range of reforms.

Approaching the elections, the EC has invested significant resources in rebranding, creating more polling stations, training polling officials, and simplifying electoral regulations. An independent survey by the Centre for Democratic Development in Ghana about month ago revealed that, apart from fears of electoral violence and vote manipulation, most Ghanaians are confident the Commission will deliver free, peaceful, and credible elections.

Yet while the EC is perhaps in better shape than four years ago, several questions remain. While Osei has expressed her commitment to a rigorous process, indiscretions under her leadership have threatened to undermine credibility.

A case in point relates to the inauguration of an Election Steering Committee earlier this year. When this body was set up, critics pointed out that the Committee lacked any basis in the administrative and legal structures of electoral administration and opposition parties bemoaned the lack of consultation.

October also brought another surprise when the Commission disqualified 13 presidential candidates largely over clerical errors. Various requests by candidates to correct these errors were not granted, which led to a series of legal actions. Many journalists have also questioned the decision of the EC to charge journalists fees, amounting to about 10 cedis ($2), to cover the election.

The electoral register has also come under scrutiny. Immediately after Osei assumed office, various opposition groups under the umbrella of the Let My Vote Count Alliance petitioned and demonstrated in a bid to urge the EC to compile a new voters’ register. The Commission rejected the calls but promised to clean the database. The voters’ register took centre stage again this year following a suit to invalidate the voters’ register by two private citizens who had earlier won another suit that barred the use of National Health Insurance Scheme IDs for registration. The Commission’s failure to heed to the Supreme Court’s order to delete names of voters who had registered with these IDs led to an unnecessary legal circus that increased apprehension about the EC’s preparedness.

These doubts grew recently following issues around missing names on the voters’ register during the ‘Special Voting’ on 1 December whereby security officers, media personnel and electoral officers vote ahead of time. The process was extended to 4 December.

The Commission has assured voters that it has now learnt useful lessons and that it is poised to deliver one of the most effective and credible elections in Ghana’s history on 7 December.

Ghana’s voters will certainly hope so. The stakes in elections have never been higher, the race rarely as tight, and the success of Ghana’s democratic experiment going forward may depend on how effectively the EC follows up its assurances with action.

Nelson Oppong is an international development scholar and consultant with an interest in governance and the political economy of reform in Africa, the Caribbean, and the Pacific. He has a PhD from Oxford University, where he teaches African politics, development studies, and global governance.