Can the credibility of Somalia’s indirect elections be salvaged?

Somalia’s electoral process has been marred by widespread allegations of intimidation, corruption and vote-buying to the tune of millions of dollars. 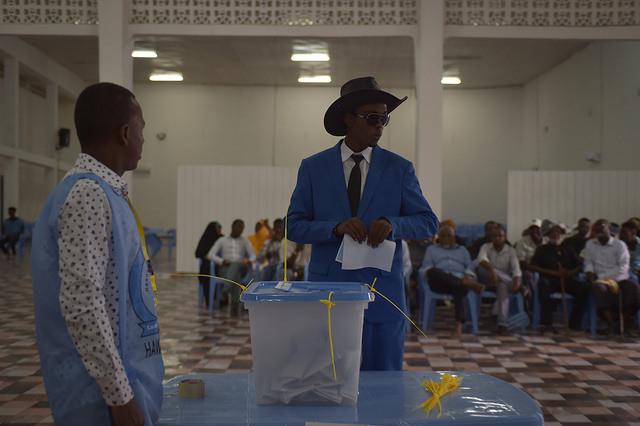 A delegate casts his vote for a member of parliament in Somaliland. Credit: AMISOM/Tobin Jones.

The credibility of Somalia’s electoral process is under severe threat amidst widespread allegations of electoral fraud, manipulation and intimidation.

The ongoing indirect elections – which began in October 2016 and involve 14,025 electors picking 275 parliamentarians – are meant to signal a crucial moment in the country’s path towards political transition and electoral democracy. But claims of egregious electoral abuse are posing a serious threat to the process.

Several parliamentary candidates have allegedly been intimidated and even attacked by rivals to get them to withdraw. In some instances, numerous nominees have pulled out leaving just one remaining candidate. In one striking case, Mumunio Saeed Mursal, who was vying for a seat in the Upper House, says she was detained and beaten by soldiers, and later found out that her name had been withdrawn from the race following a forged letter claiming to be from her.

Elsewhere, candidates have reportedly engaged in fraud and expended huge sums of money to purchase votes. According to Somalia’s Auditor General Nur Jimale Farah, “some votes were bought with $5,000, some with $10,000, and some with $20,000 or $30,000”. Two particularly sought-after seats, he says, each cost the winning candidates a whopping $1.3 million in bribes.  This is happening at a time that a new cycle of drought is putting thousands of Somalis on the brink of humanitarian disaster.

These allegations are widespread, and Somalia’s Indirect Electoral Dispute Resolution Mechanism (IEDRM) called for reviews to assess whether certain results should be annulled. However, an initial 24 seats under consideration was later reduced to 11 with no explanation. Moreover in December, the National Leadership Forum (NLF) – the body organising the elections and which is made up of the country’s leading politicians – decided to revoke all disqualifications.

Increasingly frustrated by the conduct of the process, the United Nations, African Union, European Union and others took the unusual step of issuing a joint statement in December. This was more strongly-worded than previous warnings, asserting that: “International partners believe that the integrity of the 2016 electoral process hangs in the balance. More delays and a failure to hold accountable those parties who have committed serious abuses and malpractices will compromise the international community’s ability and willingness to engage with Somalia’s next federal government.”

The US, UK and Sweden later followed this up by reminding Somalis with dual citizenship that corruption conducted overseas would still be punishable under their own law.

Nevertheless, on 27 December, Somalia’s chief justice swore in 243 new members of parliament, including those allegedly guilty of the most egregious cases of electoral abuse.

The direction in which Somalia’s electoral process has gone is hugely worrying, but no great surprise following years of political infighting, structural paralysis, internal bickering and a tragic failure of imagination.

Under the framework of Vision 2016, Somalia was meant to conduct democratic elections in 2016. However, none of the prerequisites for this significant transition – such as peace and security, political stability, functioning institutions, a party political system, and the finalisation of the provisional constitution – were successfully put in place in the interim. The international community wanted to fast-track Somalia’s path to elections, which are often seen as a panacea for development and state-building, but this ambition was unrealistic and misguided from the start.

Indeed, as the date for elections drew closer, the government claimed it was unable to carry out the one-person-one-vote poll as stipulated. Instead, the arrangement for indirect elections was entrusted to the National Leadership Forum, a UN-backed framework whose key participants included the President, the presidents of federal member states, the Speaker of Parliament and the Prime Minister.

This group of powerful individuals, all with personal interests in the contests, eventually came up with a convoluted and indirect system for selecting new parliamentarians. But many of these incumbents have been accused of manipulating the process to suit their own ambitions, with President Hassan Sheikh Mohamud and Prime Minister Omar Abdirashid Ali Sharmarke seen as the frontrunners for the presidency.

This imperfect arrangement set the stage for the current conduct of the electoral process which, after several delays and setbacks, is finally scheduled to end once the speaker of parliament and his deputies are elected by parliament later this month.

Ongoing disputes could further delay and disrupt this latest timeline, but even once the process is complete, the effects of a heavily contested election will stretch far beyond the length of the process itself.

To start, defeated presidential candidates – six of whom have already signed a letter alleging “corruption, manipulation and secrecy” in the contest and warning that they might withdraw their participation – could well dismiss the outcome, leading to deepening political distrust. A lack of perceived legitimacy of the new parliamentarians could exacerbate ethnic and tribal tensions, reversing gains made in the past few years. And, worst, the majority of Somalis may simply regard the next government as a lacking in validity and credibility.

With their patience wearing ever thinner, Somali’s donors and partners may also review their financial commitment to the government, which currently accounts for over 70% of the country’s total budget.

The credibility of Somalia’s election – and with it, the legitimacy of its future government – is already damaged. The country’s electoral bodies have expressed fear over their personal safety if they invalidate disputed cases. And the powerful NLF is filled with individuals who have close vested interests in the races.

However, not all is lost and it is more crucial than ever that international bodies such as the UN, AU and EU exert strong pressure on the government – and especially the NLF – to ensure the process is as legitimate as possible. The openly critical joint statement issued in December is a step in the right direction, but this will have to be complemented with further actions if it is to have an effect.

Members of Somalia’s electoral bodies, who have spoken about being afraid for their security in handling sensitive cases, could be better assured by international actors working in the country. An independent technical team composed of competent experts could be established to undertake a thorough audit of the electoral process and the disputed cases. And legal challenges – whether in Somali or international courts – could be prepared should contested results not be appropriately investigated.

Somalia is in a critical and fragile position. Allowing electoral fraud to be carried out with impunity would jeopardise the country’s political transition. Both Somali’s nascent democracy and the international community’s credibility are on the line.

Abdihakim Ainte is a contributor to African Arguments and political analyst. He tweets at @AbdihakimAinte.