“You belong to Joseph Kony”: How Dominic Ongwen and others became child soldiers

Testimony from a former child soldier of the Lord’s Resistance Army highlights the moral and human complexity of Ongwen’s case at the ICC. The Lord’s Resistance Army terrorised northern Uganda for several years, but peace has returned to the region. Credit: Martin Bekkelund.

Earlier this month, one of the most morally complex cases to face the International Criminal Court (ICC) resumed. In it, Dominic Ongwen stands accused of crimes against humanity and war crimes committed as a commander in the Lord’s Resistance Army (LRA).

In December 2016, Ongwen pleaded not guilty to the charges, arguing that since he was abducted by the LRA as a child, he is a victim of the rebel group.

Ongwen is the only LRA member out of the five indicted by the ICC who was abducted as a child. The other four reportedly joined voluntarily, including the still-at-large Joseph Kony, who founded the LRA in the late-1980s and is the only other surviving indictee.

The prosecution argues that Ongwen’s status as a former child abductee should not absolve him of responsibility for alleged crimes though the Chief Prosecutor conceded it might be a mitigating factor in his sentencing. The defence insist Ongwen was traumatised by the LRA and should be seen as a victim.

If accounts of other former LRA members can act as a guide, entrance into the group would certainly have had a profound effect on Ongwen. His abduction and daily existence in the LRA would have been characterised by extreme violence, both targeted at him and forcing him to target others, all in ways specifically designed to recondition him into a loyal fighter.

This is clear from the following vivid testimony of Okello, another LRA fighter who was also abducted as a child in early days of the brutal rebel group. His traumatic story reflects the experiences of many children forcibly conscripted. Without providing any answers, it highlights the complexity of the questions around responsibility and blame raised by Ongwen’s case.

It is excerpted from my 2016 book, When The Walking Defeats You: One Man’s Journey as Joseph Kony’s Bodyguard. 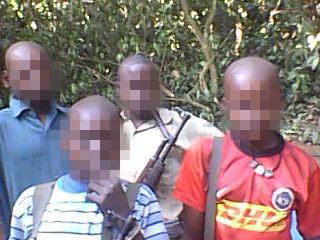 Okello started to talk about his life, as people usually did around the fire in LRA camps, following the Acholi tradition known as wang oo. Okello started his speech by lamenting the fact that he had no family of his own left, and that the LRA government was now his family, and Joseph Kony his father.

“My own father died when I was born, or that is what my mother told me. I had an older brother named Paul. People said he was crazy but Paul was not crazy, I knew him well. Paul had a sickness that made it difficult for him to understand others, but he was nice and always helped my mother and me. We lived in Minakulu, by the big road that links Gulu with Kampala.

The holies [LRA fighters] came to our village in 2003 when I was thirteen. It was early in the morning but it was still dark outside. Kidega was the commander, I know him well now. They kicked our door and grabbed us while we slept.

One of the youngus [child soldiers] held a razor blade to my neck and told me to go out. Someone grabbed mother and Paul. Paul was only sixteen, but he was tall and strong. He refused to be dragged and ran towards mother, who was being whipped by Kidega. She was too scared and confused to sit on the floor like Kidega asked her.

Kidega’s guard yelled at Paul to drop on the floor but Paul did not understand. He tried to help our mother so Kidega’s guard shot him in the stomach. Then they all beat Paul in front of us and let him bleed to death. We saw him die slowly, his blood just poured until he dried out, like a sheep being prepared for cooking. Kidega said mother was stupid for not controlling Paul, who now was dead because of her. ‘You are a bad woman,’ he said, and slit her throat.’”

Okello continued, his voice quivering when mentioning his mother.

“I was scared. When I saw Paul and my mother dead on the ground covered in blood, I could not move my hands or feet. It was like an evil spirit pinned me down. I was sure I was going to die and I wanted to. Kidega pointed his knife at my head and said, ‘You are now with the LRA, forget your family.’ The others pulled me up as I could not stand up and tied me with other children from Minakulu, also taken that night. We walked for hours until we reached the bush. I did not think I would live.

But these people here teach you to be strong. You have no choice but to obey and be strong or to die weak. The day after I was taken as we walked towards Kitgum, one kid called Olweny, whom I knew very well because we played ‘nine-stones’ together, tried to escape but they caught him and brought him back to where we stopped. Kidega then ordered all abducted children from Minakulu, thirteen of us, to pick up sticks and beat Olweny to death.

We were all in a circle around Olweny, who was really scared. He was small bodied and young, maybe eleven years old. He asked us not to kill him and started crying. Kidega made fun of him because Olweny pissed his pants. Kidega said, ‘If you don’t kill him, we will kill you.’

I picked my stick and hit him in the face, then everyone else hit him many times until he stopped moving and his brain came out of his head. I felt bad but I knew I had become a man then, a soldier.

Kidega told us to throw Olweny’s body in the bush, warning us that anyone who tried to escape would suffer the same fate. ‘You are now real soldiers of the Lord,’ Kidega said, ‘and you belong to Joseph Kony, our father.’

This is how I ended up here. This is now my family because God wanted me to be Kony’s child.”

Ledio Cakaj is the author of When The Walking Defeats You: One Man’s Journey as Joseph Kony’s Bodyguard (Zed books, 2016).