The world has put its faith in CAR’s leadership. It should think again.

Is it right to assume that President Touadera’s government is working towards peace? 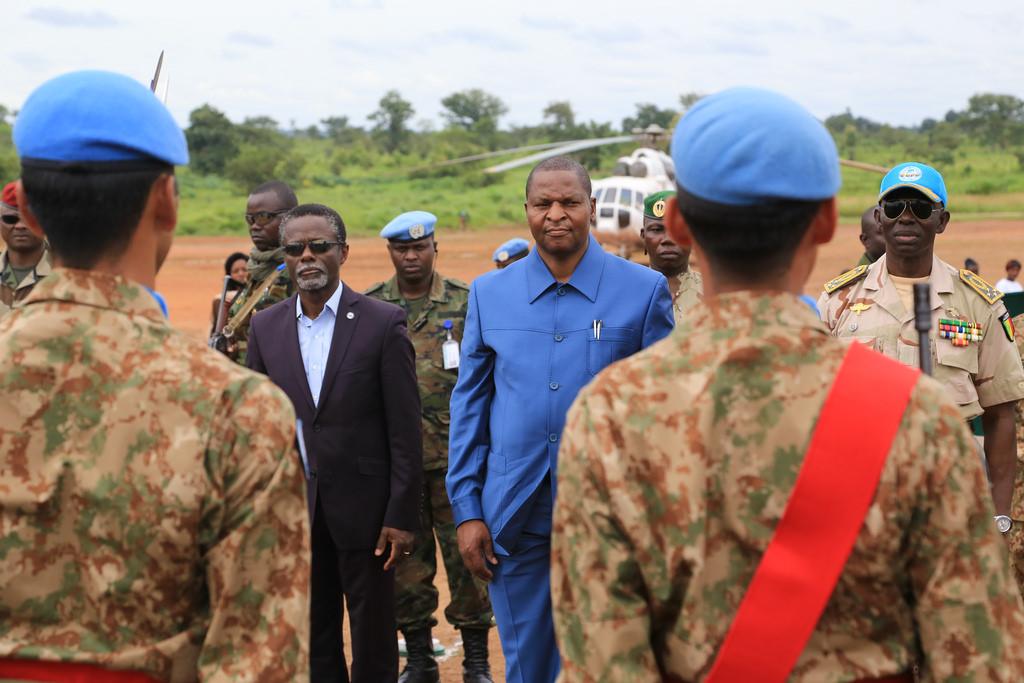 In his speech at the UN General Assembly this September, President Faustin-Archange Touadera pleaded with the world not to forget the Central African Republic (CAR). With violence continuing, and threatening to escalate, he implored his counterparts, “We need the support of our friends; there are risks that we’ll be forgotten.”

With the UN mission’s mandate pending renewal this November, the president’s plea seems to have reached the UN Secretary General at least, who is currently visiting the country.

When Touadera took office on a wave of hope in March 2016, many had hoped it would not come to this. They saw the former academic’s election as a step towards peace following years of instability and significant international intervention.

But the new president’s honeymoon lasted just six months. In the autumn of 2016, violence began to spiral again. Different factions of the ex-Seleka rebels clashed in the east, while ethnically-coded violence in the southeast prompted the UN to speak of “early warning signs of genocide”.

A plethora of peace processes to address this unrest have been launched. But most have been externally-driven – the exception being the National Assembly’s Initiative for Peace from a few months ago, which was turned down by the executive branch – and all so far have and failed. The ceasefire signed in Rome in June did not even last 24 hours before fighting broke out in Bria.

As the violence continues, Touadera has appealed to the international community to stay engaged. And for their part, foreign donors have continued to support Touadera’s government, seeing it as the most promising route to peace and taking its goodwill at face value. But few have really questioned where the president is coming from politically or interrogated whether his supporters are truly committed to peace.

What CAR’s government says, and does not

There are various reasons to be concerned about the government’s approach to making peace, starting with what it says and does not say.

For example, the government has said very little to combat hate-filled narratives seen in local newspapers. The media in Bangui have characterised armed groups as mercenaries ravaging the nation. They have accused opposition leaders of planning coups. And they have alleged that international partners are part of a mysterious conspiracy that goes against the CAR’s interests. Touadera’s government has not only failed to condemn such rhetoric, but has added to tensions by claiming the arms embargo and absence of a national army are undermining their sovereignty.

The government was also worryingly silent after the UN warned of impending genocide. It was only two months after the statement that Touadera commented on the matter after being asked about it by a journalist. The president dismissed the warnings as “mere exaggerations” and said nothing more.

With violence spreading, the government has failed to make clear public statements condemning massacres or expressing empathy with victims. The UN has flown some Central African leaders to the scenes of attacks, but since the election campaign, none seems to have taken the initiative to visit the refugee camps that house half a million of their compatriots.

To their credit, Touadera and other political leaders have professed their dedication to peace. But they have crucially been silent on the critical point of stating clearly that all those born in the country are Central Africans, regardless of their ethnic identity or religious beliefs. Emphasising this would show their support for the targets of attacks and demonstrate their objection to militant groups’ justifications for violence. By instead accusing rebels of being foreign mercenaries, CAR’s leadership appears to be in denial of the political reasons at the root of this crisis.

Some of Touadera’s recent political decisions are also cause for concern. For instance, the president recently reshuffled his government, but his appointments seem more geared towards ensuring he has support for a second term than in elevating people able to contribute to a national dialogue.

Moreover, his decision to keep important responsibilities – such as the Demobilisation, Disarmament, Reintegration (DDR) and Repatriation (DDRR) programme and security sector reform – in the president’s office and maintain close ally Matthieu Sarandji as Prime Minister suggests an unwillingness to empower his government.

The president’s new cabinet does contain some representatives of former armed groups. This would not have been feasible just one year ago and could be seen as indicating openness to dialogue. But at the same time, it is disappointing that the nomination of new governors did not take a bottom-up and inclusive approach. Instead, former members of the national army were elevated in order to help restore state authority in the northern and eastern provinces, where the claims for participation are rightly higher. There also do not seem to have been attempts to be inclusive along the lines of gender or ethnicity.

The UN peacekeeping mission in the country (MINUSCA) bears some responsibility for the progressive deterioration of the situation in the CAR. But it cannot restore peace without the engagement and vision of the national government.

So what is the government’s vision for restoring stability? Unfortunately, the past twelve months raise doubts as to whether there is one.  So far, CAR’s leadership seems to be putting its support behind two solutions to the crisis, but both are limited in strategic scope and may be creating dangerous expectations.

The first is the Demobilisation, Disarmament and Reintegration programme. A decade of failures on this front does not mean this approach is necessarily doomed, but it should offer some notes of caution.

As it stands, the spiralling violence has made a national DDR programme impossible. Instead, smaller surrogates have been implemented on a case-by-case basis. These haven’t produced much in the way of results so far, beyond collecting some small weapons and offering a few months of work to participants.

This limited progress contrasts with Touadera’s apparent faith in the DDR process. It also falls far short of people’s raised expectations following years of promises that there would be a ceasefire and that combatants would be disarmed and reintegrated into the national security forces. In fact, the prospect of being enrolled in a DDR programme has become a status in and of itself.

Continuing to foster unrealistic expectations about DDR could increase frustration and disappointment among both combatants and civilians.

Another solution being pushed by the government is around justice. In a speech in August, Touadera pledged that “justice will be inescapable”. Central Africans certainly want that to be the case. But again, the pledge glosses over the fact that CAR’s justice system is in shambles. A fair trial was extremely rare even before the crisis began. But now, instituting law and order is an even bigger challenge.

Working to build a strong national justice system should obviously be one of the first peace-building priorities for the next decade. But blindly promising justice for all victims could dangerously backfire. It could lead to massive disappointment when it becomes clear that very few of the countless crimes committed will be investigated. And it will raise unrealistic expectations in a country where talk of justice often makes people think of reparations or quick economic compensation for their losses.

The absence of a national vision and demonstrated will to find a political solution to the conflict should be alarming. It should also lead to a change of thinking amongst the CAR’s international partners.

The United Nations as well as the other international institutions engaged in CAR should all re-examine their strategies. They may well need to diversify their national partners for peace and use their leverage to force the country’s leadership to step up. Continuing to assume – rather than insist – CAR’s leaders work for peace will not help to move the process forward.