Bobi Wine: Why the Ugandan regime is so rattled by the popular musician

When Bobi Wine is released, the young and outspoken MP will likely be welcomed by even bigger crowds than he left behind. 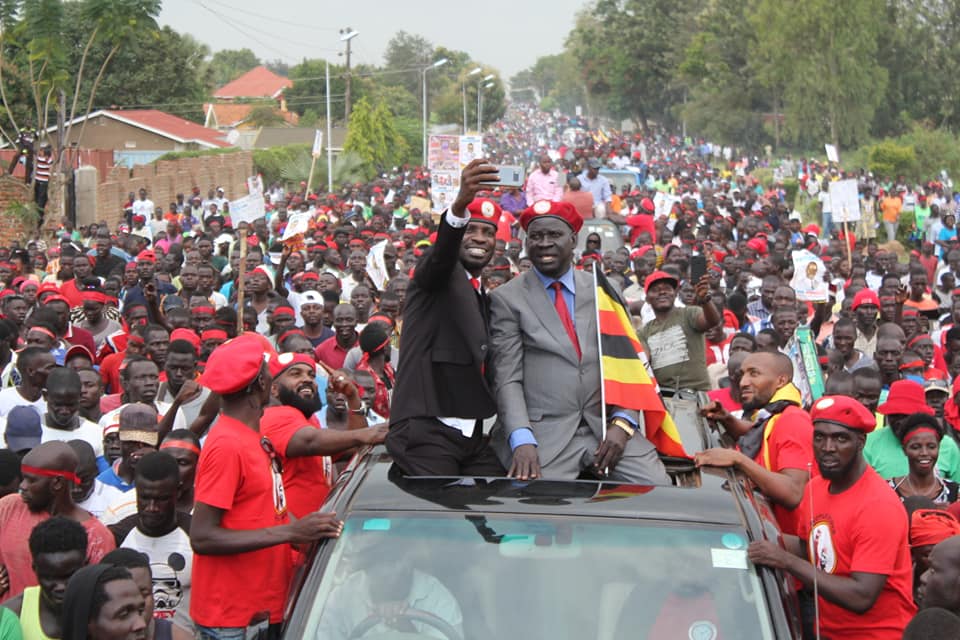 When Robert Kyagulanyi – better known as Bobi Wine – was elected to Uganda’s parliament last July, the opposition’s excitement around the iconic musician’s victory was palpable. But it was also tempered with scepticism.

On the one hand, Bobi Wine was young and charismatic – a rarity in Ugandan politics. He had won the urban Kampala constituency by-election by a landslide. He was an articulate and charismatic opponent of the government, a defender of the poor, a man known popularly as the “Ghetto President”. His arrival in parliament would surely be a breath of fresh air.

On the other hand, however, some were wary. They noted that Bobi Wine was untested and inexperienced. He was not the first musician to join Parliament, and his lack of a party affiliation could leave him isolated. His ascension was perhaps worth celebrating, but many did not expect much from the young man beyond his symbolic electoral victory.

Yet just one year later, even those with the highest hopes may be surprised at the extent to which the new MP has shaken up Ugandan politics. Far from being an ineffectual sideshow, the 36-year-old has become the face of the opposition. He led efforts last year against the ruling party’s plan to amend the constitution. He recently spearheaded protests against a new social media tax. And the candidates he has supported in elections have triumphed, trouncing nominees backed by both the ruling NRM and the main opposition Forum for Democratic Change (FDC).

As he has toured the country, the crowds at his rallies have continued to swell. There is already talk in opposition circles of him challenging President Museveni in 2021.

The rise of Bobi Wine

Bobi Wine, who grew up in a Kampala slum, was a musician for 15 years before going into politics. Yet his songs were often political as he criticised the government in his lyrics and defended the poor. He built a reputation as a brave defender of social justice and as a son of ordinary Ugandans.

Soon after he joined parliament, it was clear that he was going to do things differently. Barely a month after taking his seat, he embarked on a tour of the country. He waved the Ugandan flag wherever he went and was greeted at every town by large processions. He took every opportunity to appear on media platforms, both locally and internationally, using his fame to speak out against Museveni’s authoritarian rule.

Bobi Wine was vocal and articulate, spreading his slogan of “people power” and urging the youth to forget their partisan differences and unite around a common goal of removing Museveni. But the musician did not just speak. He also managed to mobilise the youth through calls his to action and by giving them something to (literally) sing about. While marching alongside his fellow citizens in street protests, he has also continued to use his music to energise supporters. He has sung hopeful songs of political freedom followed by romantic tunes of love.

In songs like Freedom, released late last year, he calls for popular resistance to the constitutional amendment that saw the presidential age limit of 75 removed, allowing Museveni rule beyond 2021. In Time Bomb, he warns the government of an uprising if there is no solution to rampant corruption, inflation and tribalism. The videos of both songs show crowds gathering with placards, an unmistakeable call to revolution for the many Ugandans who have lost faith in the electoral system as a potential vehicle of change. As a fellow artiste remarked, Bobi Wine’s gun is his music.

For many Ugandans, Bobi Wine embodies something exciting and new. After 32 years of President Museveni and nearly 20 years in which the only alternative has been the veteran election runner-up Kizza Besigye, the musician looks and sounds different. At 36, he is also much closer to the average age of Uganda’s youthful population than the 74-year-old Museveni or 62-year-old Besigye. Many Ugandans have only ever known Museveni as president. To them, the liberation war of the early-1980s – on which Museveni has staked his legitimacy for decades – means very little, not to mention the civil wars of the 1960s and ‘70s.  This is especially so when the current government has overseen widespread corruption, growing authoritarianism and mass unemployment.

[Bit by bit, Uganda is laying the groundwork for future unrest]

Bobi Wine has clear rattled the NRM, which has ruled for the past three decades. And this is why it responded with such force last week.

It all started as both Bobi Wine and Museveni campaigned in the northern town of Arua ahead of a by-election. Protesters reportedly threw stones at the president’s convoy, leading to clashes with security forces. Later that day, Bobi Wine tweeted a photo of his driver, slumped dead and bleeding in his car, claiming that he had been the real target.

Police has shot my driver dead thinking they've shot at me. My hotel is now coddoned off by police and SFC. #Arua pic.twitter.com/fw0GeV0vU9

The next day, the police arrested Bobi Wine along with 32 others. Two days later, on Thursday, the MP was charged in a military court – despite being a civilian – with unlawful possession of firearms and ammunition.

Since then, reports have emerged that Bobi Wine has been badly beaten and tortured. “He is in great pain,” said one of his lawyers. “He can’t talk, he can’t walk, he sits with a lot of difficulty, his face is swollen and he cannot see.” Museveni dismissed these claims as “fake news”.

Despite the government’s version of events, it is clear that this state violence is less about guaranteeing presidential security than containing a new and growing threat. Yet the irony is that by detaining Bobi Wine, the NRM has stimulated an even bigger following.

Since his arrest, social media in Uganda and the broader region has erupted with messages of sympathy for the singer. #FreeBobiWine is trending. Uganda’s fractured and disorganised opposition has found a rallying call around which to unite. A fledgling movement has been injected with renewed vigour in resisting state repression. In various towns, there have also been protests and riots against Bobi Wine’s arrest as supporters demand his release.

Though things remain uncertain, the Ugandan state cannot hold Bobi Wine forever. If he is convicted on charges widely accepted to be trumped up, wells of anger and frustration that have built up over decades could spill onto the streets. But even if he is released with charges dropped, he will leave the prison gates to even bigger crowds than he left behind.