Congo: Why it’s time for the opposition to get behind Bemba

The former warlord is no perfect candidate. But if the opposition unite, they could finally remove the Kabila government in December elections. 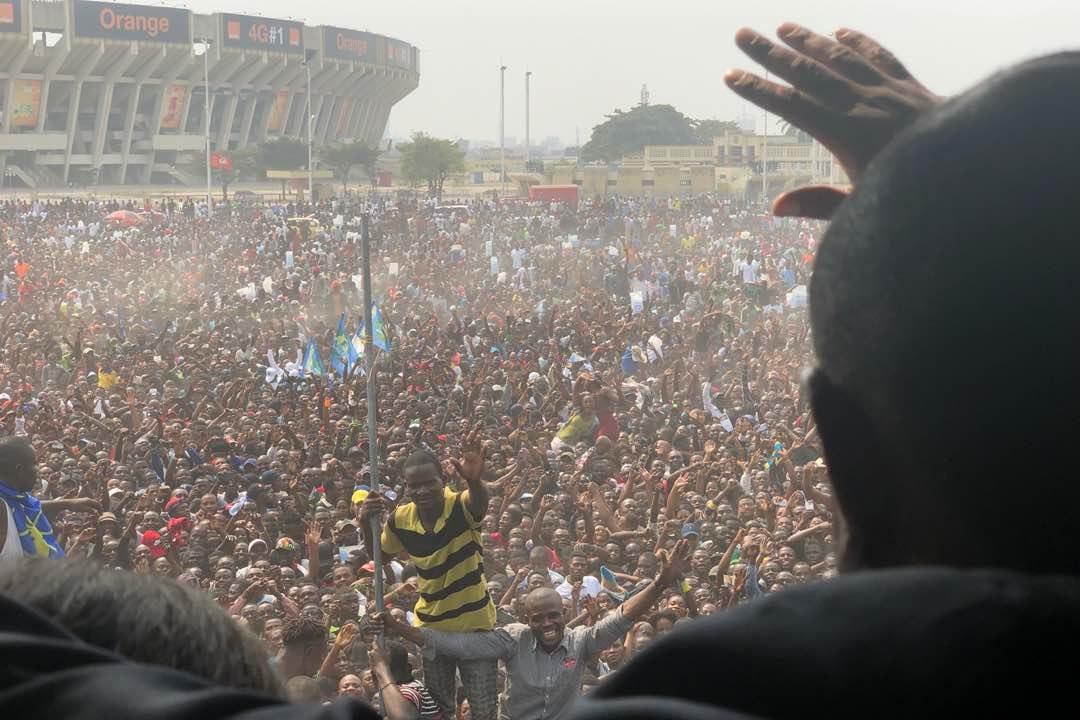 Jean-Pierre Bemba on his return to the Democratic Republic of Congo after ten years. Credit: jpbemba2018.

Sharing much with the eponymous river that snakes through our vast country, Congolese politics eschews straight lines, settling instead upon frequent – often violent – meanders. The past week or so has involved a particularly tumultuous swirl of events.

To begin with, the former Congolese warlord and vice-president Jean-Pierre Bemba returned home on 1 August to a thunderous welcome. He wasted little time in visiting the electoral commission to submit his application to run in the presidential election scheduled for December.

Soon after, news emerged that Moise Katumbi, the former governor of Katanga, was trying to re-enter the country too. This exiled opposition leader also wanted to submit his candidacy in time, but was thwarted in his attempts to cross the border, first by air and then by land.

Finally, as the 8 August deadline for nominations approached, all eyes turned to the president. In power since 2001, Joseph Kabila was supposed to step down after his second term expired in 2016, but he has managed to stay in power by delaying elections. With those twice-rescheduled polls now just a few months away, many expected him to announce another postponement or somehow find a way to put his name on the ballot. But instead, it was announced at the eleventh hour that the ruling coalition was putting forth another candidate: Emmanuel Ramazani Shadary.

Kabila’s decision to name a heir means the Democratic Republic of Congo (DRC) will finally have a new president, but it seems unlikely that Ramazani would mark much of a shift if elected. The former interior minister and hand-picked successor is a long-time acolyte of both the current president and his late father, former president Laurent-Desiré Kabila.

The hope that Ramazani could bring change is also checked by the fact he is presently under European Union sanctions for his role in the widespread crackdowns of anti-Kabila protests since 2016. “He is responsible for the recent arrests of activists and opposition members, as well as the disproportionate use of force”, read the grounds for his punishment, which goes on to list examples of his “violent repression”.

Ramazani is a curious choice. Widely loathed for his hand in the government crackdowns, the 57-year-old politician – who has called for party members to hurl insults at those criticising the ruling coalition – is no obvious vote winner. Moreover, hailing from Maniema province – like Matata Ponyo, prime minister from 2012 to 2016 – a Ramazani ticket is unlikely to sit well with those hoping for new regional voices in the corridors of power.

In a truly free and fair election, it is hard to believe that Ramazani would stand a chance. But the ruling coalition has not lasted this long in power through popularity.

Its longevity is built on a variety of factors such as brute force and patronage. But it also rests on Kabila’s talent for dissecting, outplaying and subduing the opposition. Over the years, the president has expertly co-opted opposition figures through the lure of office, leaving the DRC bereft of strong political voices. He has sown discord among opposition groups, leaving the country without the just, tolerant and modern leadership it desperately needs.

The upcoming December elections provide a rare opportunity to forge a new narrative. In a recent poll undertaken by the Congo Research Group and Congolese polling firm BERCI, 57% of respondents said they want the opposition to unite behind a single candidate. Asked who should lead it, preferences were fairly evenly split between Katumbi, Bemba and Felix Tshisekedi, the son of the late veteran politician Etienne Tshisekedi. The three men’s individual polling figures are all virtually tied at around 17-19%.

Among them, however, one stands above the other two in his potential to coalesce the opposition. Tshisekedi may bear one of the most respected names in Congolese politics, but he lacks the political experience to shepherd our fragile institutions and economy through turbulence. Katumbi may be easy on the international community’s eye, but is regarded by in many circles as une coquille vide (“an empty shell”) and may have been prevented from registering to run by Kabila’s government anyhow.

That leaves Jean-Pierre Bemba, a former warlord and leader of the rebel-group-turned-political-party Movement for the Liberation of Congo (MLC). Before his dramatic return, the 55-year-old former vice-president had spent the last ten years in custody in The Hague. In 2016, he was convicted of war crimes committed during the MLC’s suppression of a coup in neighbouring Central African Republic. This June, he was acquitted on appeal and released.

Bemba is undoubtedly a deeply flawed candidate. He is no perfect leader that Congolese citizens can blindly trust to implement radical changes and deliver the DRC from its travails. But in these difficult times, we need to hope. A rough and muddy diamond is more valuable than certain despair, and Africa’s great leaders have often emerged from similar stock as Bemba’s.

To unite the opposition, however, Bemba will need to take certain actions. To begin with, he will have to distance himself from the MLC, which has had a poor record in his absence. Instead, he should run as an independent, which would allow him to posit himself as a unifying force for the country’s divided opposition.

Bemba must also convince his fellow opposition leaders – starting with Katumbi and Tshisekedi whose bases will be crucial to mobilise – to get behind him. According to polls, the combined level of support these three individuals enjoy completely eclipses that of the ruling coalition, which had the support of just 19% of respondents.

Finally, and crucially, Bemba would have to run on a campaign that expounds a new form of politics, one not yet seen in the Congo and that promises to once and for all embed democracy, good governance and fundamental rights. If he could do this convincingly and with sincerity, Bemba would garner support from grassroots organisations like Congo Remontada.

Few expect the December elections to be free and fair. 62% do not trust the electoral commission and 45% say they would not accept the results if Kabila’s candidate wins. This demonstrates the extent to which voters expect the ruling coalition to pull out all the stops to ensure victory.

It will undoubtedly be an uphill battle for the opposition to win. But even though it will involve tough compromises, the only chance the DRC has of finally removing Kabila – or his dauphin Ramazani – is to unite.