#FreeBobiWine and today’s Pan-Africanism for the digital age

African activists are increasingly finding their voices amplified by allies across the continent. Most #FreeBobiWine traffic came from outside Uganda. 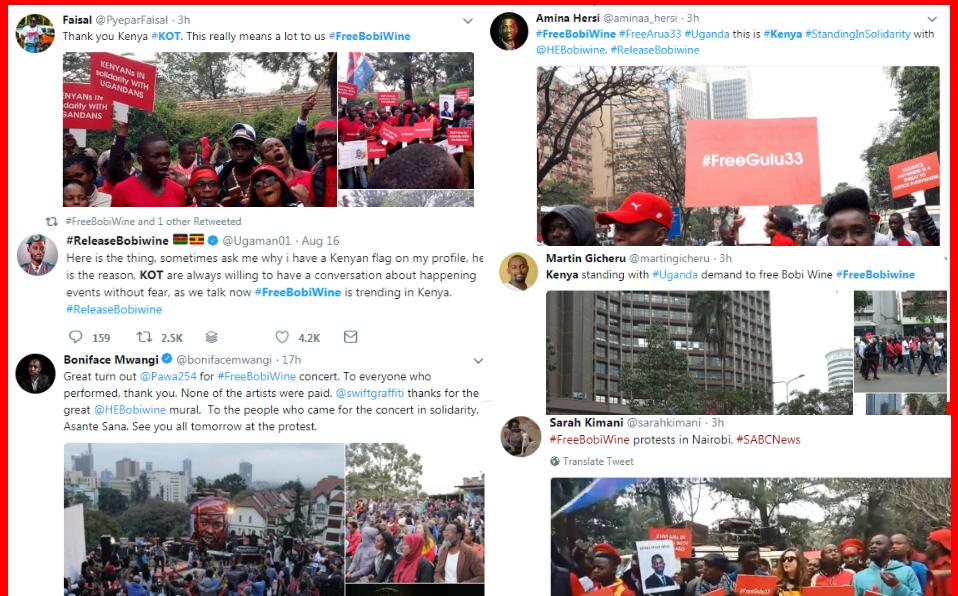 When Ugandan politician Bobi Wine was arrested, people across East Africa voiced their opposition both online, through the #FreeBobiWine hashtag, and offline.

The violent arrest, detention and now treason charges levelled at Ugandan politician Robert Kyagulanyi – the musician otherwise known as Bobi Wine – has electrified social media users across East Africa. Throughout the week, people in Kenya, Tanzania and even Burundi have been following events in Uganda and tweeting #FreeBobiWine. In fact, most of the trending hashtag’s traffic (51%) has come from not from Uganda, but Kenya.

This may be partly explained by Kenya’s bigger population and Uganda’s newly-imposed social media tax. But the real lesson from this phenomenon is the extent to which people are using new media to speak into each other’s political realities. Across different African countries, citizens are engaging in shows of solidarity reminiscent of the independence and anti-apartheid struggles of previous generations. This is pan-Africanism for the digital age.

In the last year alone, youth activists in Togo, Zimbabwe, the DRC, Cameroon, Tanzania and now Uganda have demonstrated on social media and had their voices amplified by their neighbours. The leaders of African movements – far more than their peers elsewhere in the world – have appealed to allies beyond their borders, who have raised the profiles of their causes. Hashtags created in Dar es Salaam have trended in Kampala and Nairobi and vice versa. These online movements have also fuelled offline shows of support through protests and petitions.

The underlying praxis is not new. Similar transnational networks of solidarity were crucial for Africa’s independence and anti-apartheid movements.

In 1945, for example, young leaders met in the UK for the Pan-African Manchester Conference; some like Hastings Banda and Kwame Nkrumah would return home to lead the resistance against independence. Around the same time in Lisbon, Guinea-Bissau’s Amilcar Cabral was part a small group of thinkers from Lusophone colonies who giving life to the concept of pan-Africanism; the materials they used included those developed by Senegal’s Leopold Senghor in the magazine Présence Africaine. In Africa, the desire to speak into each other’s political experience is as old as the resistance to colonialism and authoritarianism.

There major difference today is the use of technology, which has hugely enhanced the speed and strength with which people are able to respond to threats such as the arrest of Bobi Wine. This has also effected a shift in the kinds of people who can be involved in these practices. Previously, much of the work of pan-Africanism was an elite project, shrouded in complex philosophical formulations that only really trickled down after several decades. Those who gathered in Manchester or Lisbon were highly educated and well-travelled. It is still the case that Africans on social media are relatively more educated and wealthy than national averages, but the barriers to engagement are immeasurably lower than getting an invite to an international conference on pan-African ideology.

Indeed, most of those agitating for the release of Bobi Wine are ordinary people who don’t have any specialist interest in the political philosophy of pan-Africanism. They may not even be aware that they are contributing to the new ideas taking shape organically through conversations and arguments online. For example, the consensus that the arbitrary detention of political opponents is inconsistent with the future we want to see – a principle that has informed much activism around Bobi Wine – is largely unspoken.

In enabling these conversations, digital media is allowing people to develop a new vocabulary for pan-Africanism. These technologies make it possible for people to connect much faster than a mailed newsletter or a meeting in another country. New media has an intense multiplier effect. The phenomenon of something trending – whereby thousands of people signal their interest in a single subject – invites others to participate too and attracts media attention. Sharing a story makes it more likely that it will be shared further and covered on the 7 o’clock news.

As journalists are suppressed, new media can also fills an important gap. In Uganda, for instance, journalists covering the #FreeBobiWine protests have been threatened and there were none present when security forces arrested all the occupants of an office building in Kampala. A video made by a Twitter user, however, alerted the public that the arbitrary detention was underway. When a Reuters photojournalist was beaten on the streets, the only reason the story was told was that someone took a video and posted it online. There is a palpable connection between the witnessing of oppression that social media makes possible and the increased courage of witnesses calling out their oppressors.

Changing realities on the ground

Of course, it is easy to over-romanticise or overstate the value of these developments. The solidarity for Bobi Wine has a lot to do with his popularity as a musician. The others who were arrested in Arua alongside him – those who have not played huge shows in Nairobi and Dar es Salaam – have not received the same attention. It is also worth noting that the people we see online are a subset of a subset of East Africans – those who have Internet, and who use it to access social media. A trending topic on Twitter is not a movement, but an indicator of political sentiment.

Still, something important is happening through this online activism. Take, for instance, the unravelling of the deference culture in Ugandan politics. Uganda is one of the youngest countries in the world and the 74-year-old President Museveni has a habit of referring to voters as his grandchildren. Ten or twenty years ago, it would have been unfathomable that young people would publicly talk back to a self-declared elder. But in 2018, responses to Museveni’s official Twitter handle and Facebook page are saturated with demands to #FreeBobiWine. That loss of deference matters and is slowly seeping offline as people become more combative and less quiescent.

The import of these developments is often lost in the fog of conversations about social media’s negative impact on politics in the West. To be sure, it isn’t all rosy. Social media is an outlet for hate speech even in Africa. A recent study in Germany found that “wherever per-person Facebook use rose to one standard deviation above the national average, attacks on refugees increased by about 50 percent”. Last year, a UN report cited Facebook as a major factor in violence against the Rohignya in Myanmar.

Groups of urban youth in Africa tweeting about one man’s arbitrary arrest can seem minuscule in the shadow of such issues. But it is clear that the #FreeBobiWine movement has already had an impact on the reality on the ground. It is one of an increasing number of such incidents. And it matters a great deal for African politics that Kenyans are speaking up so loudly for a Ugandan cause, as Congolese have for Togolese, Nigerians for Zimbabweans, and so on.

The hope is that these new pan-Africanists will also now be part of the process of improving online communities so that the gains of this movement-building are not lost.