Colonialists didn’t fail to root out Africa’s tribal politics. They created it.

In the West, rulers used notions of race to subjugate black people. In Africa, they used ethnicity. 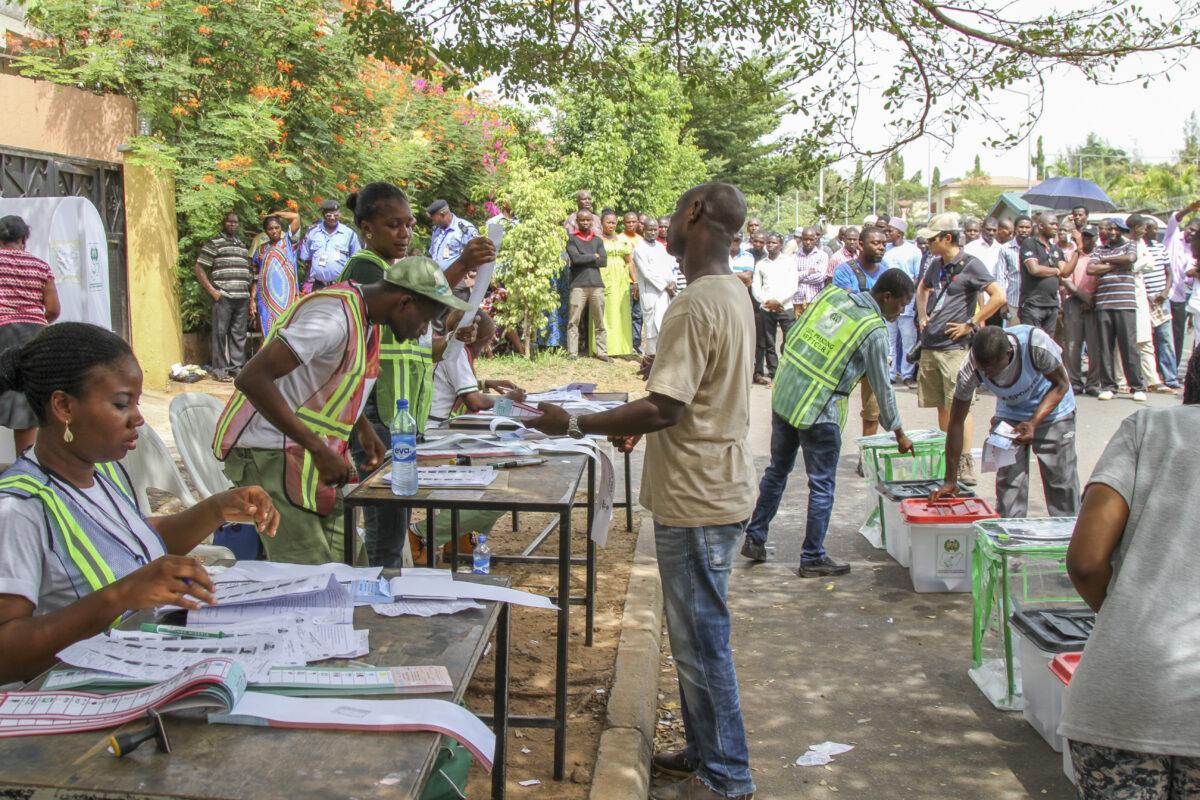 Ethnic voting is seen by many as being rooted in ancient allegiances, but it is as old as colonialism. Credit: US Embassy/Idika Onyukwu.

Standing in line at a Nairobi polling station to cast my ballot in Kenya’s 2017 presidential election, I struck up a conversation with fellow voters in the queue. The result was a foregone conclusion, said one of the gentlemen proudly. We had the numbers and our candidate was going to win. Everyone else agreed.

No one needed to ask which candidate we would be voting for. That was another foregone conclusion. We were speaking in Kikuyu, and the Kikuyus were voting for President Uhuru Kenyatta.

In the end, Kenyatta was indeed re-elected, winning almost the entire Kikuyu vote. His running mate did the same with the Kalenjin votes, the two men garnering over 95% in counties where their ethnic groups are the overwhelming majority. Their main challenger, Raila Odinga, got over 90% in counties where the Luo dominate.

In countries across Africa, similar patterns emerge in elections. From Kenya, to Sierra Leone, to Malawi, many votes cut heavily across ethnic or regional lines. Ethnic politics in Africa is commonplace.

This fact is often framed as a continent-wide struggle between the ancient and the modern, between Africa’s age-old tribal allegiances and its modern political institutions inherited from Europe. According to this narrative, African societies are yet to be fully reformed by modern life. When faced with elections therefore, voters continue to express old tribal solidarities rather than deciding based on ideology or policy.

This argument presents European colonialism as a civilising mission against the customary order, albeit one which failed to fully de-tribalise its subjects. The 1884 Berlin Conference, far from dividing Africa among European powers, becomes seen as a unifying exercise that brought tribes together into modern political entities. As foreign affairs commentator Jonathan Power wrote in a 2006 article for The New York Times:

“On Africa’s left it has been a common jibe that the Europeans ‘divided’ Africa. In fact they brought Africa together. Indeed – as in Nigeria, where Lord Lugard forced more than 250 ethnic groups involving today’s 130 million people into one political unit – you could argue that the colonialists went overboard in the quest for unity.”

African tribalism is contrasted with the ideal standard of Western modernity. This received narrative is deeply questionable.

By contrast, however, these kinds of voting patterns in the West are examined differently to those in Africa. They are explained through the lens of modern political forces rather than by recourse to ancient cultural ones. Racial politics in the US, for instance, is usually tied to its modern history of racial discrimination and the ensuing struggle for civil rights.

The story goes as follows: America was a colony built on slave labour yet this fact contradicted its founding ideology that all human beings are “endowed by their creator” with an “inalienable right” to freedom. In the face of this, and with the South still deeply reliant on slavery, scientific racism stepped in claiming that black people are biologically inferior and distinct from white people. An alliance between this scientific authority and political power essentially invented biological race, codified it in law, and enforced it. In 1857, the Supreme Court, in Dred Scott v Sandford, declared that black people are “of an inferior order and altogether unfit to associate with the white race”. It declared that black people have “no rights which the white man was bound to respect”.

This history, which still reverberates today, shows politicised race in America to be a product of a deliberate political project aimed at subjugating and exploiting a social minority. The fatal flaw in the current understanding of politicised ethnicity in Africa today is the failure to recognise the same hand at work, only acting against the social majority.

In Africa, as in the US, the ruling powers faced the challenge of subjugating black people. Here, however, racial strategies were unsuited for the task at hand since a black majority with a united race consciousness would pose a threat to white minority control. European powers therefore turned towards a tribal strategy of creating and enforcing divisions in the majority. They entrenched the “tribe” as the basis of social, economic and political life through a policy known as indirect rule.

Before the colonial era, African ethnicities had been highly fluid and malleable phenomena. They did not exist as corporate entities. Boundaries were really shades of grey. People switched back and forth between groups. And, for the most part, no central authority enforced a shared set of laws through a monopoly of violence. As historian Terence Ranger writes in The Invention of Tradition:

“Almost all recent studies of nineteenth-century pre-colonial Africa have emphasized that far from there being a single ‘tribal’ identity, most Africans moved in and out of multiple identities, defining themselves at one moment subject to this chief, at another moment as a member of that cult, at another moment as part of this clan, and at yet another moment as an initiate in that professional guild… the boundaries of the ‘tribal’ polity and the hierarchies of authority within them did not define conceptual horizons of Africans.”

Tribe, in other words, was not an exclusive political category before the onset of colonial rule. Ethnolinguistic groups – people who shared a language and ethnicity – did not necessarily constitute a political grouping known as tribe. As the eminent scholar Mahmood Mamdani puts it in Define and Rule:

“Did tribe exist [in Africa] before colonialism? If we understand by tribe an ethnic group with a common language, it did. But tribe as an administrative entity that distinguishes between natives and non-natives and systematically discriminates in favor of the former against the latter – defining access to land and participation in local governance and rules for settling disputes according to tribal identity – certainly did not exist before colonialism.”

This messy and fluid picture was untenable to European intentions. What followed then was a process of legally defining and enforcing tribes, identities and customary laws. An alliance between scientific authority and political power, as in America, was needed for the task. What the biologist did for the racialisation project in the US, the anthropologist did for the tribalisation project in Africa.

Ethnolinguistic groups were legally defined as tribes, becoming legal and administrative categories for the first time. Disparate communities were collapsed into new creations of Shona, Yoruba, Luhya, Igbo. Even multiethnic states such as Ndebele in southern Africa were defined as a tribe, while some groups, like the Yaaku of East Africa, were simply left out and forced to integrate into adjacent demarcations.

Colonies were divided into administrative units that approximated boundaries between the defined tribes, and a “native authority” was put in charge to enforce customary law by force. Where a chief was identifiable, the British brought them into the colonial administrative structure and gave them absolute autocratic power. Where no chiefs existed, they invented them. The French, by contrast, destroyed all indigenous authorities and planted new administrative cadres but with the same function: to enforce customary law by brute force. Customary law was also a continuously creative definition; the customary was tweaked and nurtured to conform to European objectives of domination.

Far from “going overboard in their quest for unity”, Europe was very deliberate in its cultivation of divisive tribal nationalisms in Africa. Cross-group interaction and freedom of movement across “homelands” was heavily controlled. Any attempt to build cross-ethnic political movements or socioeconomic organisations was met with swift repression.

As colonial history progressed, an elite stratum emerged in each tribal enclave. This group’s basis of power was the tribal group and it helped reproduce political ethnicity. The “nationalist movements” that emerged as independence approached were not cross-tribal and grassroots, but rather coalitions of elites from their respective groups.

Upon independence in many African countries, the victorious ethnic coalition established a centralised state, creating a system of ethnic winners and losers. Colonial rule had been maintained by force, leaving behind no institutions; post-independence, the state’s only links to the collective were therefore also through sticks and carrots. The new rulers offered patronage to ethnic leaders in exchange for mobilising their group behind the ruling coalition.

Many of those left out expressed their grievances in terms of ignored ethnic interests and were suppressed by force. Under multi-party democracy, ethnic groups have had to form coalitions and vote together to install a common leader, a trend sustained and reinforced in each electoral cycle.

Kenya and certain other countries exemplify these trends to a staggering level, but not every nation in Africa met the same fate. In some places, colonisation took a different form, which did not create and emphasise tribal politics.

In mainland Tanzania, for instance, German authorities utilised the literate Swahili community along the coast to administer the colony. This led to a more unified Swahili culture across the territory and, after independence, a truly non-ethnic political movement in TANU found space to flourish. To this day, ethnic politics has never predominated in Tanzania.

Another example is Senegal. There, colonialists may have wished to impose tribal nationalisms, but ran up against the dominance of the marabouts, the religious leaders of the Sufi brotherhoods to which most of the population belong. Faced with this reality, the French authorities appeased the marabouts and drew on their support to consolidate control. This impeded the entrenchment of ethnic politics and, today, voters in Senegal do not vote along ethnic lines either.

This history shows how both race politics (in the US and Europe) and ethnic politics (in Africa) are the result of politically-enforced orders. They were both the result of brutal attempts to control subjugated populations. In the West, black people were racialised. In Africa, they were tribalised.

The notion that ethnic politics are a result of “ancient” tribal affiliations in Africa that have resisted modernisation is therefore wrong-headed. It also suggests that the usual solutions put forward for fixing ethnic voting – such as increased literacy, urbanisation or voter education – are as misguided as recommending that racial politics in the US can be wiped out by “modernising” the American electorate.

The truth is that both electorates are similarly “modernised”. The problem is that this modernity created and politicised certain identities and built systems of privilege and deprivation based on those divisions. These systems affect the university-educated urban-dweller in Africa as much as it does the rural subsistence farmer. Ethnic tensions in Kenya flare up even in universities and among well-paid professionals.

In the US, race inequality and racism cannot be solved by teaching the electorate that race is a construct. Similarly, Africa cannot tackle ethnic divisions by enlightening individual minds. Rather, to tackle the problems of ethnic politics, countries where this dominates must reimagine the political system in such as a way as to dismantle ethnic privilege and deprivation and build a new system no longer based on winners and losers.

Kamau Muiga is a writer and part-time lecturer based in Nairobi, Kenya. His essay 'Bantu's Swahili, or How to Steal a Language From Africa' was nominated for the 2018 Brittle Paper Anniversary Award. Follow him on twitter at @kamaumuiga.