Xenophobic attacks: Why the official outrage from Nigeria this time?

After repeated xenophobic attacks in South Africa, the Nigerian government response has typically been muted. Why was this time different? 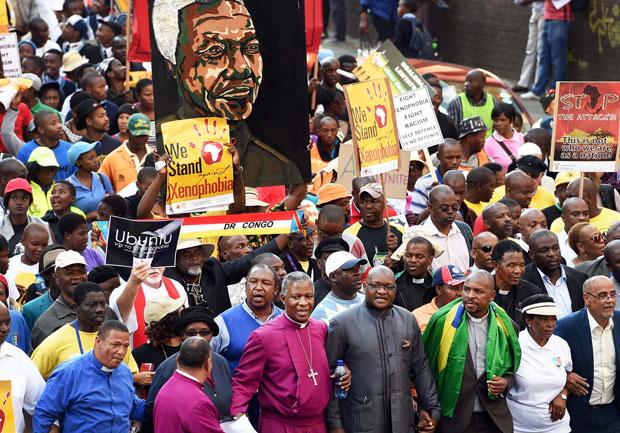 A march against xenophobia following attacks on foreign nationals in South Africa back in 2015. Credit: GCIS.

Earlier this month, a wave of violent xenophobic attacks occurred in South Africa. Businesses owned by black Africans were looted and destroyed, while several lives were lost. The police seemed impotent to stop the violence and some South African commentators appeared to place part of the blame for the violence on “criminal Nigerians”.

Nigeria and South Africa have had a long and complicated relationship. During the apartheid era, Nigeria played a leading role in criticising the racist South African government and its Western allies. It supported anti-apartheid campaigners by issuing over 300 passports to South Africans and, in 1979, nationalised British Petroleum’s Nigerian assets in retaliation against the UK’s decision to sell oil to the apartheid regime. When South Africa’s transitioned to democracy in 1994, Nigerians greeted it as a victory for them too.

After this point, the roles reversed. Now, South Africa exerted diplomatic efforts to support pro-democracy activism in its West African partner, which culminated in Nigeria’s return to multi-party democracy in 1999. From then, the two young democracies quickly forged economic bonds, signing trade deals and encouraging investors to move between both countries. Oando, a Nigerian oil and gas firm, listed on the Johannesburg Stock Exchange; MTN, Multichoice, and other South African retail and banking firms set up Nigerian operations.

From the 2000s, however, there were increasingly reports of xenophobic attacks in South Africa targeted at nationals of other African countries, including Nigeria. There were also growing stories of Nigerians being the victims of police brutality. Despite repeated episodes of violence, however, the Nigerian government’s response remained muted. This was the case even up to this June when Uju Ndubuisi Chukwu, a government official, was killed in Johannesburg.

The government’s response to xenophobic attacks this month, however, has been different. After initial hesitation, it seemed that the Nigerian government had finally had enough. It summoned South Africa’s ambassador to Nigeria, recalled the Nigerian ambassador to South Africa, and dispatched a special envoy. It strongly condemned the attacks and withdrew from the World Economic Forum meeting in Cape Town. The chair of the ruling All Progressives Congress (APC) and the Kaduna state governor even called for South African companies operating in Nigeria to be nationalised, citing the British Petroleum precedent.

Part of the government’s robust response was a reaction to popular outrage. On social media, many people recalled the efforts of Nigeria and other African countries in ending apartheid and accused South Africans of ingratitude. Meanwhile on the streets, mobs looted South African businesses, leading riot police to be deployed in shopping malls. The South African High Commission in Nigeria and MTN Nigeria’s stores temporarily closed for safety reasons.

This violence was partly driven by the fact that Nigeria is in the grip of post-recession low-growth, which has seen the unemployment rate rise to 23.1%. Jobs are being lost faster than they are being added, leading to lots of idle and frustrated youth. This explains why the riots did not only target the South African supermarket chain Shoprite, but also Nigerian-owned stores. There were also indiscriminate attacks on vehicles.

It seems that the swiftness of these attacks took the Nigerian government by surprise and spurred it to greater action, driven by the need to convince the public it was taking the issue seriously. It may also have been motivated to act in order to avert further looting. Nigeria desperately needs to attract foreign investment especially following its recent assent of the African Continental Free Trade Agreement (AfCFTA).

Under these circumstances, it appears that Nigeria’s government concluded that it would not be in its best interests to sit back and mouth a few platitudes as usual. Popular anger against the government and the worsening economic climate had found an outlet in attacks on South African businesses, and the authorities likely calculated that a weak response on their part would risk allowing the situation to spiral out of control. The visceral online and offline reactions in Nigeria jolted the government – desperate to appear on top of the situation and on the side of the population – into more forceful action than ever before.

Since the height of the violence, tensions with South Africa seem to have died down for the moment. Among other things, an official apology from South Africa’s President Cyril Ramaphosa helped to calm the waters. However, with anger among the citizens of Africa’s two largest economies still simmering, both governments will need to seek lasting solutions to their respective lingering economic crises or risk another blowout.

Cheta Nwanze is the Head of Research at SBM Intelligence.