Congo-KinshasaCovid-19Society
Home›African Arguments›Country›Central›Congo-Kinshasa›Photo essay: In Congo, from epidemic to pandemic

Photo essay: In Congo, from epidemic to pandemic

The Democratic Republic of Congo was getting ready to declare itself Ebola-free when COVID-19 hit. Since 2018 , Ebola has killed 2,267 people. Now, the coronavirus has infected 1,169 people and led to 50 deaths.

A group of photographers have been capturing different aspects of this period. Congo in Conversation is led by British-Canadian photographer Finbarr O’ Reilly. He was awarded the 11th Annual Carmignac Photojournalism Award, which focuses on the DRC this year. He began his reportage in January 2020, but when international borders began closing, he put his original project on hold.

Instead, he has been collaborating with Congolese photographers on the ground, including Arlette Bashizi, Justin Makangara and Moses Sawasawa. Below, we feature some of their stunning work (reproduced courtesy of the Fondation Carmignac) with words from the photographers themselves.

“In February, as I followed a local Red Cross team preparing an infant’s burial in the eastern Congolese town of Rutshuru, I thought I was documenting the final days of the second-worst Ebola epidemic in history. I never imagined that an even deadlier health crisis loomed, on the verge of consuming not only Congo but also the rest of the world.” Neighbours and Red Cross workers in protective clothing prepare to bury an 11-month-old girl who died during Congo’s Ebola outbreak in the town of Rutshuru in Congo’s North Kivu Province, February 2020. 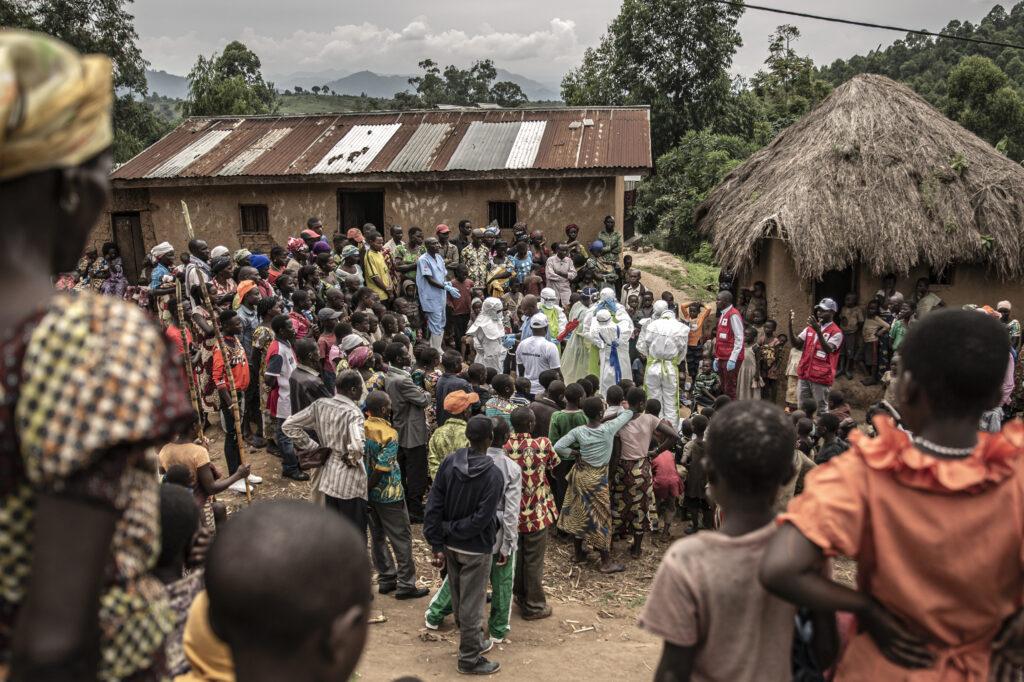 Neighbours and Red Cross burial workers in protective clothing gather outside the home of a family where an 11-month-old girl has died during Congo’s Ebola outbreak in the town of Rutshuru in Congo’s North Kivu Province, February 2020. Red Cross burial workers the body of an 11-month old girl who died in the town of Rutshuru during the Ebola outbreak, February 2020.

“When the first cases of coronavirus were confirmed in Goma in early April, people began to panic. Because of the Ebola epidemic here in eastern Congo, people got scared easily about a new deadly virus. Three days after the first locally confirmed case of COVID-19, I went out with a group of young activists from a radio show called Kazia Pale.

The activists were visiting people who were especially vulnerable during confinement. We went to a neighbourhood called Katoyi, an area that doesn’t have easy access to running water. We met some widows and the activists made sure they had information about the importance of hand washing. They explained that if water was scarce, they could use disinfectant gels instead to protect themselves. The women were grateful that younger people were looking out for them. We also visited an orphanage: there, the activists spent some time explaining the importance of washing hands for 20 seconds.” 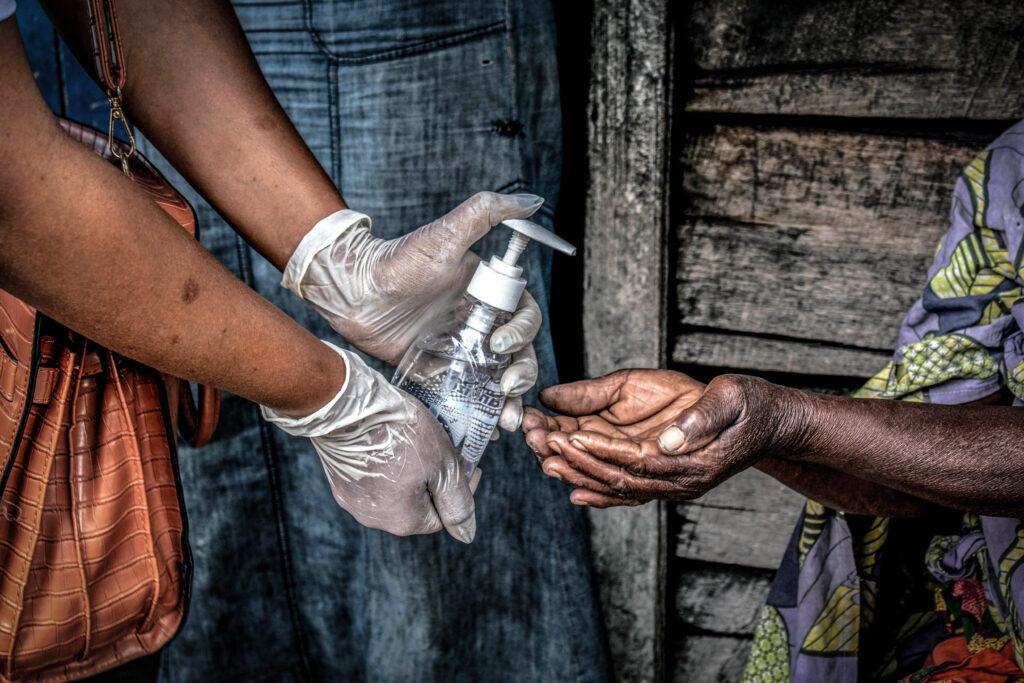 In early April, three days after the first case of COVID-19 was confirmed in Congo’s eastern city of Goma, a woman is given disinfectant in the city’s Katoyi neighbourhood, where residents do not have easy access to water. Children wash their hands at an orphanage in Goma in early April, three days after the first case of COVID-19 was confirmed in the eastern Congolese city. 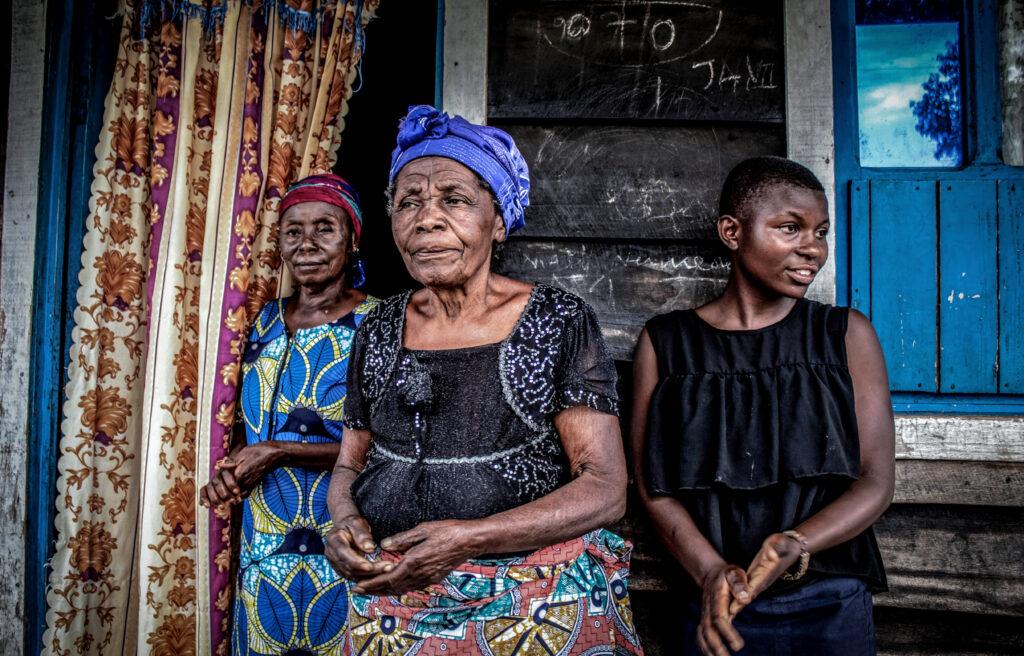 Women wipe their hands after being given disinfectant and information on maintaining proper hygiene.

“I live in Congo’s capital Kinshasa, one of Africa’s largest cities. The central business district of Gombe — Kinshasa’s financial and administrative hub where many foreigners and Congolese elite live and work — is the epicentre of DRC’s coronavirus outbreak. On 19 March, schools were closed, major commercial activities halted, and Gombe was put under lockdown with access roads blocked off and passes required for entry. Police patrolled Gombe’s streets and people were screened at the entrances to buildings and at the few essential shops that remained operational.

While Gombe’s streets fell quiet, scenes in the surrounding neighbourhoods were very different. As I walked through Mont Ngafula, a southern commune of Kinshasa, I found many people who were not yet respecting social distancing measures and other precautions suggested by the World Health Organisation. Even now, many people continue business as usual without protection. Many don’t believe the virus is a real threat to them.” 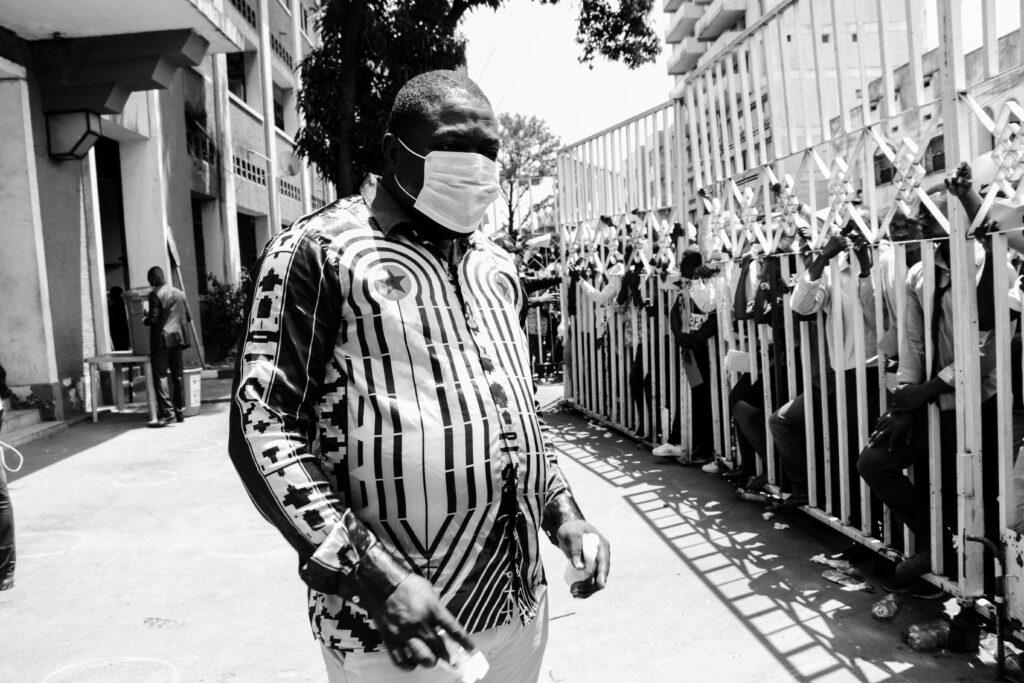 A provincial deputy addresses a crowd of people frustrated with a process required to obtain access badges to the central commercial Gombe district of Congo’s capital Kinshasa, in early April. A member of the COVID-19 response wears protective equipment at the entrance to a building in the Gombe commune  in mid-March, 2020. The responders were at the main entrance of the building to raise awareness among apartment residents about social distancing and to take the temperature of anyone entering or leaving the building, where there are around 75 families and offices.

“I took these photos at Kituku market on the shores of Lake Kivu on 2 April, the day after the first COVID-19 case was confirmed in Goma. The country had closed its borders and declared a state of emergency the week before. The capital, Kinshasa, was under confinement, and health officials were calling on all Congolese to observe social distancing. But many people were still out conducting their daily business.

People working in the informal sector don’t have much in terms of savings, and often don’t have electricity for refrigeration. This means that people cannot buy food for more than a day or two at a time. This creates a constant demand for small-scale trade at markets like Kituku. Vendors have to wash their hands upon entering, and are supposed to respect social distancing. But for us here in Congo, respecting a metre of distance in the market is impossible. Informal trade involves close contact and cash transactions passed from hand to hand.” Vendors and shoppers at Kituku market on the shores of Lake Kivu in Goma, eastern Democratic Republic of Congo, April 2, 2020. 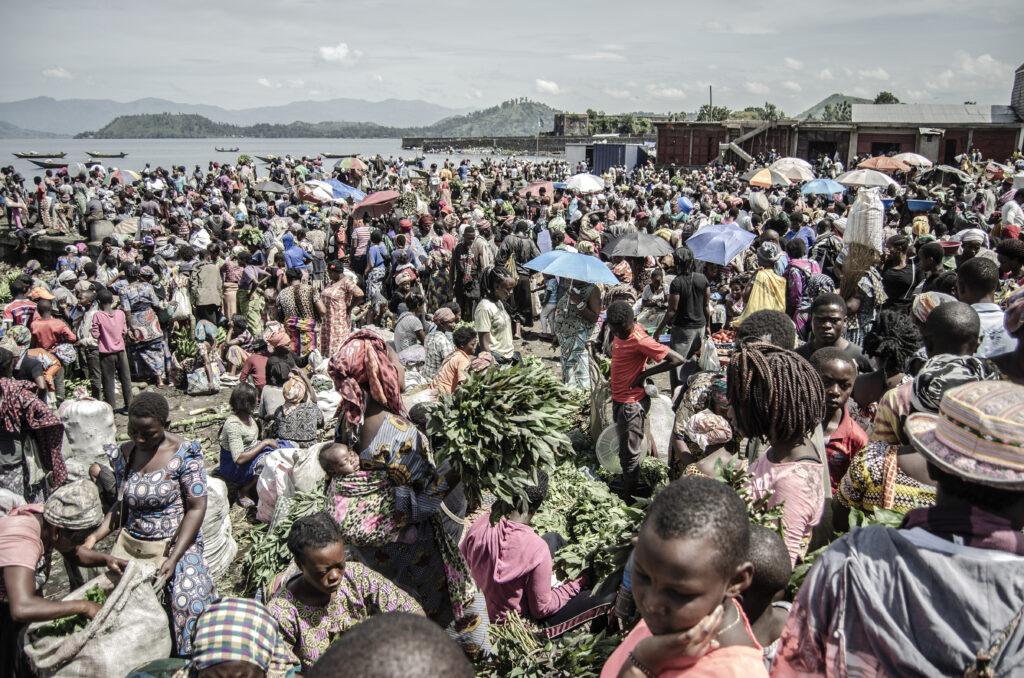 When everyone knows the emperor has no clothes but no one dares say it out loud, even the smallest acts of dissent become ones of radical defiance. This article is ...
By continuing to browse this site, you agree to our use of cookies.