Sudanese-Egyptian Military Relations and Geopolitics: Implications for Powering the GERD Egypt’s deepening relations with Sudanese senior military will prolong talks over the GERD as Egypt attempts to leverage its geopolitical relationship with Sudan to influence the water sharing negotiations.

Egypt has been deepening its relations with the Sudanese military. That has been happening as a result of the visit of Lieutenant General Abdel Fattah Al-Burhan, the commander in chief of the Sudanese Armed Forces and the chairman of Sudan’s Sovereign Council (SC), to Egypt in October.  Egypt will use the deepening of its relations with the Sudanese military to gain Sudan’s support in the stalled talks with Ethiopia over the filling of the Grand Ethiopian Renaissance Dam (GERD). That could encourage Lt. General Al-Burhan and his military allies in the SC to take over the GERD negotiation talks from the civilian government, undermining Prime Minister Abdallah Hamdok and Sudan’s neutrality on the talks, as well as Sudan’s interest in the agreement.

Egypt’s deepening military ties with Sudan started when Ethiopia announced that the initial phase of filling the GERD had been completed on 15 July 2020. A source of concern for Egypt, which maintains that the filling of the GERD is a breach of the declaration of principles signed by Egypt, Sudan and Ethiopia back in 2015. The declaration of principles had provided assurance that the GERD will not cause harm to downstream countries: Egypt and Sudan.

Furthermore, Egypt’s demand that Ethiopia sign a legally binding agreement with regards to the shares of the Nile water passage to the downstream countries has been further complicated by the May/June 2021 election politics of Prime Minister Abiy Ahmed and his government. Prime Minister Abiy Ahmed’s political and economic reforms, faced with mounting internal discontent within various regions of the country, could be tolerated if he was able to show his supporters and rivals that GERD talks concessions were managed to the benefit of the country.

Looking to ensure its own water security against Ethiopia’s refusal to concede to the terms of the regional agreement, Egypt resorted to deepening its relations with Sudan’s civilian government headed by Prime Minister Abdullah Hamdok with the aim of pressuring Ethiopia to sign an agreement.[i] Both Foreign Minister Omer Gamar Eldin and Yasser Abbas, Minister of Irrigation and Water Works, are in charge of overseeing Sudan’s technical oversight in the GERD talks. To enlist Sudan’s support in the GERD talks, Egypt held a series of meetings and signed agreements with Prime Minister Hamdok and his government.

Amongst those agreements and talks was the holding of a conference in Sudan by several Egyptian officials and investors to review investment opportunities. One such agreement signed on 25 October by both countries concluded a cross-boundary railway aimed at improving the economic prospects of Sudan through increased shipment of livestock and agricultural goods which accounted for 20 percent of the country’s GDP in 2013. Soft power initiatives like these are planned to encourage Prime Minister Hamdok’s support for Egypt’s preferred regional water sharing agreement which dictates Ethiopia’s operational plan for the GERD.

However record rising floods in Sudan in August this year, where more than a hundred people died and 875,000 people lost their homes, prompted Prime Minister Hamdok’s government to shift its policy in support of the operationalization of GERD to lessen the damage of future seasonal flooding, especially of large tracts of arable land on either side of the Blue Nile, and in Khartoum. The Sudanese government’s support for the GERD is also driven by the prospects of cheap energy for industrial investment which could be sourced through the new dam. Sudan suffers from a 40 percent deficit in electricity. The country has suffered regular eight hour day power shortages on a daily basis from the summer of 2016.  Once GERD is up and running it will provide 200-300 megawatts of energy that Sudan could import to reduce its deficit of electricity.

To carefully balance its interest with that of Egypt, Sudan used the diplomatic card of raising concerns regarding its own development projects. Particularly that the GERD might affect the safe operation of The Roseries Dam located only 62 miles away, allowing Prime Minister Hamdok to re-affirm Sudan’s support of and role in regional power structures through which the GERD talks must be resolved by reaching a comprehensive and binding agreement on the rules of filling and operating the GERD.

Getting the military involved

As a back-up tactic, Egypt attempted to gain the support of the Sudanese military. Egyptian President Abdel Fattah El-Sisi held bilateral talks on the GERD negotiations and on military and security relations between both countries with Lt. General Abdel Fattah Al-Burhan of Sudan. The outcome was an agreement to deepen military cooperation between both countries and reiteration of the need for a legally binding agreement on the filling of the GERD. As many senior Sudanese military officers studied or were trained in Egypt, the country has closer relations with its military counterpart compared with the nascent civilian wing. Lt. General Al-Burhan is a notable example of investment in human cadres, having been trained in Egypt.

Although Lt. General Al-Burhan has shown no direct interest in the GERD talks, motivated by what their breakdown could mean for Prime Minister Hamdok’s national and regional standing, still Egypt continues to encourage Lt. General Al-Burhan and his allies to be directly involved in those talks leveraging the mandate availed to the SC through the  constitutional declaration allowing him to be involved in the GERD talks as well as the right to sign off on an agreement.[ii]

What further encourages Egypt to trust the Sudanese military is its interest in protecting its southern borders. This view has been shaped by Egypt’s concern over its own security as a consequence of witnessing first-hand the implications of the raging civil wars in both Syria and Libya. Indeed, Egypt believes the Sudanese military is the only disciplined and organized institution capable of holding Sudan together against competing interests from within. Another reason encouraging Egypt to work with Lt. General Al-Burhan is that he managed to position himself as an important military player for Egypt for his role in deposing former President Omar Al-Bashir.[iii] Additionally, the recently signed Juba agreement allows Lt. General Al-Burhan to continue to lead the SC for another 20 months, rather than stepping down as planned in February 2021. This reassures Egypt’s interest in Sudan, provided that Lt. General Al-Burhan does not invoke the Halayib triangle, a highly contested border issue between both Sudan and Egypt.[iv]

As an outcome of Lt. General Al-Burhan’s meeting in Egypt he paid a two day visit to Ethiopia. During that visit it became apparent that he has attempted to soften Ethiopia’s approach towards the GERD talks and to encourage it to sign a binding agreement. However, Lt. General Al-Burhan’s primary motivation to hold talks with Prime Minister Abiy Ahmed is his interest in upstaging the civilian wing of the government on the GERD in hopes of improving his credibility for his own presidential ambitions in 2024. Unlike the civilian government, Lt. General Al-Burhan and the military are beholden to the constraints of the Declaration Forces for Freedom and Change (DFFC) who were responsible for his endorsement alongside the civilian counterpart. The latter see Sudan’s interest with the operation of the GERD.

As a show of its commitment to deepening of military ties with Sudan and to signal to Ethiopia that Sudan will support Egypt in the GERD talks, Lt. General Mohamed Farid, the Egyptian Military Chief of Staff, headed a delegation of commanders of the Egyptian military in a two-day meeting with their Sudanese counterparts in Khartoum on 31 October.[v] The outcome of the meeting was that both sides agreed to have joint training for all branches of their militaries, in a step aimed at intensifying military cooperation, materialized in both militaries carrying out two-week air exercises from Merowe Military Air Base in Northern Sudan. 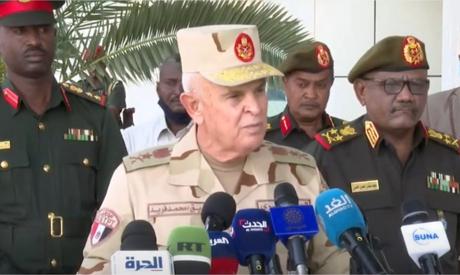 Tigray: a new round

Prime Minister Abiy Ahmed’s declining popularity in Ethiopia as a result of the raging civil war could result in more inflexibility around the GERD talks and the successful prospect of reaching a binding agreement. In fact, the GERD served as a centrepiece of his popular claim to power; its public financing by Ethiopians instilled a common sense of nationalism based on the belief they will be able to monopolize the flow of Nile waters, an expectation he will have to meet for his re-election bid in 2021.

With Ethiopia in the midst of a civil war it seems Egypt’s deepening relations with Sudan will not have much of an impact on the GERD talks. However, it will encourage Lt. General Al-Burhan and his military allies in Sudan to take bolder moves within domestic politics. Now that Al-Burhan’s governing life-line has been extended by a year as the head of the SC, it is highly probable he will attempt to continue to undermine the civilian government.

[i] Author interview with Abbas Al-Hamza, Press Secretary of the Broad National Front that used to be a body within the DFFC (phone interview on 11 November 2020).

[v] Author interview with Nazar Abdel Aziz, a leader of the Broad National Front that used to be a body within the DFCF (Phone interview 11-12 November 2020).

The Nigerian government is burying its atrocities ...

Jihad Mashamoun is a Political Analyst on Sudanese Affairs. A holder of a doctoral degree in Middle East Politics from the Institute of Arab and Islamic Studies, University of Exeter, he has authored and co-authored numerous articles on the Sudanese uprisings and Sudanese affairs. He has provided expert interviews on Sudan for both radio and print. Follow him on Twitter @ComradeJihad.