Democracy Means Building and Connecting People as well as Institutions: Lessons from Sudan 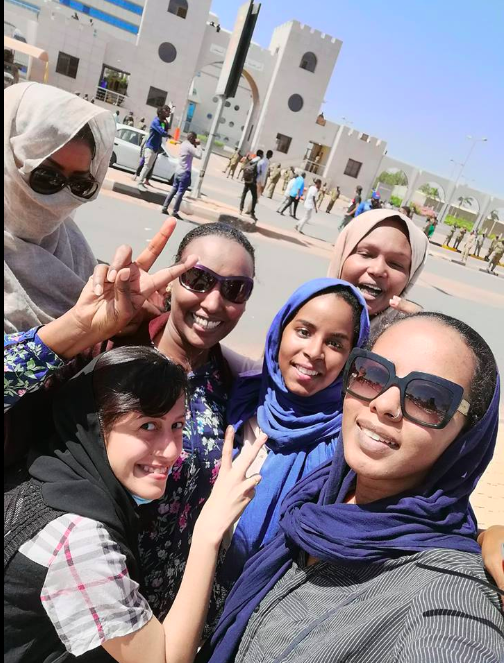 Women congregate to celebrate in public on 6 April 2019 after the fall of al-Bashir in Khartoum, Sudan

Democracy by the United Nations’ definition is founded upon the principle ‘that the will of the people is the source of legitimacy of sovereign states.’ Similarly, the African Union (AU) states on its website that in line with Agenda 2063, the organisation works with ‘member states to develop and implement policies that aim to build strong, well governed institutions and enact laws that will ensure Africa’s citizens are fully engaged and involved in policy-making and development initiatives’, considering this as a pillar to establishing democratic states. A policy brief by the East West Centre based on a regional workshop on political transitions and cross-border governance in East Asia stated that the first issue to tackle in political transitions is establishing institutions, norms and practices.

Sudan’s current political transition began in 2018 and after nearly a year of mass protests culminated in the signing of a constitutional declaration in August 2019. A transitional government currently implementing the constitutional declaration has so far been unable to manage people’s expectations of the process, especially youth who made grave sacrifices for Sudan’s third revolution. As such, I cannot help but question the impact of institutions like the AU during the democratic transition and the implications of the declaration. In this brief reflection, I bring up three important issues that have created a polarized environment during the past year that could impact the success of the transitional period and influence Sudan’s path to democracy.

Firstly, the AU and the regional bodies pressed the different national and local actors to sign an agreement at all costs. This is understandable given the potential implications of an unstable country like Sudan for the security and stability in the region and the continent at large. The regional bodies wanted to ensure that a volatile situation did not deteriorate, and to stem any unpredictable political complications. On the other hand, the intertwined interests of the mediators and intervening countries further complicate the political dynamics, making it hard to prioritize national interests over regional geopolitics. This is becoming evident with the rising ethnic tensions in Eastern Sudan. Military and political agendas of outsiders are also part of Sudan’s political calculus. These different factors urged a hastened political settlement regardless of its ramifications for democratic transition, and sold short the long-term struggles of the Sudanese people.

Perhaps because of this, Sudan’s constitutional declaration has met with severe obstacles. The 30 June 2020 mass protest, organized in response to the sit-in massacre, has proven a decisive turning point where military generals were forced to acquiesce to the new authority of the revolutionary infrastructure. Given this shift in power dynamics, the regional bodies should have supported the civilian component of the administration to reclaim power and produce an agreement that diminishes the power of the military’s hold over Sudan. Instead, the result was a flawed agreement that kept the military in place and alienated the youth who felt betrayed by a process that is unlikely to instigate any real transformation. Initiated on the wrong footing, the transitional period is unable to accomplish its responsibilities as set out in the constitutional declaration and is instead engendering more public anger and frustration. More importantly, it created a polarized political environment leading to intergenerational fractures and a divergence from the aims of the Forces for Freedom and Change’s revolutionary manifesto, exposing cleavages in the civil structures, to the advantage of their military counterparts. A stronger declaration could have created a representative government that in turn could have facilitated successful implementation.

As such, it strikes me that the process by which political agreements are made remain problematic to the realization of democracy. This includes how issues are discussed, who gets to sit at the table, and how some voices are silenced – especially any who are against the international procedures and formalities of celebrating and acknowledging signed documents, and who are against the undermining of community-based agreements. Author interviewed on CNN on political developments during Sudan’s uprising

Secondly, political agreements, including those backed up by humanitarian aid, make a point to prioritize institution-building as a pillar for democratic transformation and a critical component for implementing the Sustainable Development Goals. In fact, institution-building has become one of the main tools used by development agencies to promote sustainable development and to support fragile states; yet research shows that this approach works only sometimes, and much depends on the type of institution building. At other times, the institutions are too deformed and ‘predatory’ to be reformed. Where organizational and capacity building efforts do not flow from a serious context-analysis process that is tailored to the needs of the country and its population, mistakes tend to be replicated, under conditions of impoverishment, displacement and denied opportunities. Institution building, one of the core responsibilities of a transitional period in Sudan, may subsequently be deemed a problematic process. For Sudan’s displaced populations living in camps and in the outskirts of major cities, who are mostly uneducated and unskilled and operate from without its professional social networks, it is even more critical to match institution building with human capital growth, tailored to support and serve those it targets. Building people is not just about providing educational opportunities. It is also about providing direct channels of communication between institutions and their patrons, giving them skills to realize their potential and ensuring that their needs are met, so as to end the vicious cycles of poverty and alienation.

For example, in 2014, a group of women tea sellers on the streets reported increased income following a cost-effective management skills-building exercise by a civil society organization. Small efforts to empower people and give them access to tools improve their quality of life, integrating them within society. Technology is a great tool to improve people’s quality of life as the internet gives them access to networks, knowledge and products that many are now using to make an income and improve their job prospects.

Thirdly, the AU needs to allow regional mechanisms and institutions such as the Intergovernmental Authority on Development (IGAD) to increase their role, while coordinating with them more effectively. These bodies are important because of their presence on the ground, their faster pace in taking action and their ability to involve civil society and other local actors. They can push countries to address their shortfalls and re-assess their democratic experiences in light of lessons learned from neighbouring countries. But the competition and the unclear division of labour and mandate between the AU and other regional bodies can create confusion and a lack of cooperation, as in the case of Sudan, marking territorial engagements and grounds for intervention which then give grounds for bickering and finger-pointing at country level.

Finally, democracy is a process that is intertwined across the region. A steady democratic transformation in Sudan will have positive ramifications in the region. It is our responsibility to support each other. The AU should be among the bodies facilitating inter-regional and continental dialogues and should invest in the capacity-building of its youth as they are Africa’s future leaders. If democracy becomes normalized as part of their daily lives, they will reproduce democratic practices across their parties, communities and organizations. This is what we have always been struggling for.

Researching Sexuality in Ethiopia: Reflections on My ...