I was abducted by Museveni’s regime. This is what I saw.

Hundreds of people have been seized by Ugandan security forces in recent months. Some re-emerge. Others don’t. 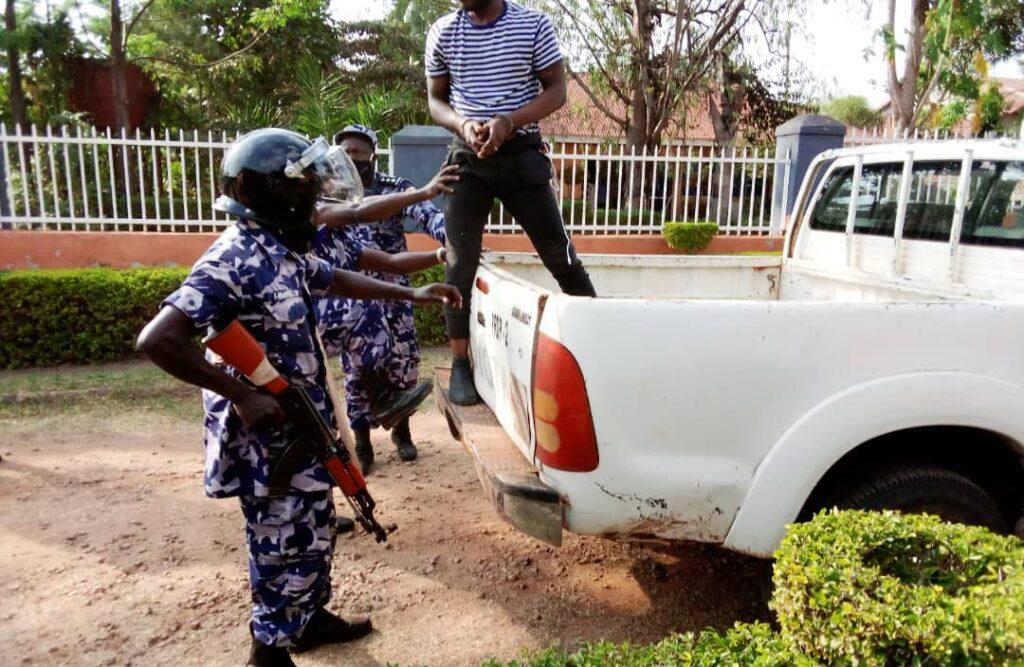 One of Bobi Wines supporters being seized by security forces in Uganda in January 2021. Credit: NUP.

For the last few years in Uganda, I had taken stories of President Yoweri Museveni’s government kidnapping political opponents with a pinch of salt. Even as I campaigned as a parliamentary candidate for the opposition Alliance for National Transformation (ANT) ahead of the 14 January 2021 elections, I presumed that presidential challenger Bobi Wine was exaggerating when he claimed that thousands of his supporters were being abducted.

It wasn’t until a week after the elections that I learnt how wrong I was. In my contest to represent Bungokho central constituency in Mbale, there had been widespread fraud. As observers had noted across much of Uganda, the electoral process in my race was also marred by ballot stuffing, voter suppression and other irregularities. President Museveni may have officially taken 58.64% of the presidential vote to extend his 35-year stay in power, but the population’s true preferences may never be known.

Armed with evidence of electoral malpractice, I returned to the capital Kampala to contest the vote in court. But before I got a chance, three men in a Toyota primo kidnapped me from the Nsambya neighbourhood. They drove me 14 km to a court in Kira, on the outskirts of Kampala, where a minor civil case I was involved in was heard. I was quickly sentenced to a month in prison.

I spent six days in Kira police station before I was transferred along with about twenty others to Kitalya Mini-Max Prison. Located in Busunju County in central Uganda, this maximum security five-acre prison facility opened in 2020. It was meant to accommodate 4,000 inmates but was already seemed over-packed.

One of the first things I noticed was the towering perimeter wall and the dozens of CCTV cameras that permanently watch the inmates whether they are in the large prison wards, one of the 30 cells, or the outdoor spaces. Outside, an additional six watch towers also keep a close eye. One day, we heard thundering gun shots ring out in the early hours of the morning. We were later told that a prisoner had been caught trying to escape.

The prison wardens that greeted us on that first day set the tone for my whole stretch. “You have no rights here. You failed your mother. You either follow what we tell you or we break your leg,” they told us. We were strip-searched and given dirty lice-filled uniforms. They told us that putting on an underwear is a criminal offense. Every following day, the wardens reminded us “you are in between death and life” and said we could either obey and leave alive or disobey and leave dead. We later found out that when they enter a room or finish talking, inmates are expected to clap gratefully. Not doing so can invite a beating.

Inside the prison, even the very basics of life were unbearable. To go the toilet, you have to ask for permission and then kneel in line. When it’s your turn, you have less than one minute before you’re pulled off the toilet. And that’s when there’s water running. Several times, water shortages meant toilet and bathing rights were restricted. It was common for inmates to go several days without washing. Prisoners frequently suffered from lice or scabies and scratched relentlessly.

Many also got ill and would violently cough night after night. Those who saw a doctor were told there’s no medicine. They were advised to drink water, yet clean water is often unavailable. Boiled water is a commodity sold by inmates with kitchen privileges. For meals, we were meant to be served porridge, posho and beans every day, but the rations often ran out and the beans were sometimes infested with insects.

Sleeping in the prison was a nightmare. One ward would be packed with hundreds of inmates lying side by side. If we wanted to shift, the entire row would need to agree to roll at once.

The days were almost as miserable. On my second day, I tried to exercise but another inmate quickly warned me to stop. “You’re making a very big mistake,” he said. “When they find you doing push-ups here, you will sleep in solitary confinement in a room filled with water for several days and you’ll be accused of plotting to escape or planning to beat up prison warders.”

While in Kitalya, I spoke to other inmates and learnt that many were political prisoners. Among them were well known supporters of Bobi Wine such as Nubian Li and Eddie Mutwe. They were arrested along with Bobi Wine and scores of other opposition supporters on 30 December 2020. Li and Mutwe were charged in a military court earlier this year despite being civilians.

“We are here suffering because we rejected the many offers of money which Museveni’s regime made to available to us,” said Li. “And if you have joined us here, just be strong brother because is not easy here. We’re the people who are used to exercising and reading books but, to read books political in nature is a terrible offense.”

It was arguably those caught in the crossfire of Uganda’s politics, however, that had the most tragic stories. A 19-year-old prisoner called Denis told me how he’d been arrested in August 2020 by men dressed in army uniforms while he was returning home from a market in Kampala. He was accused of wearing clothes that were the same red as that of Wine’s National Unity Platform (NUP) party. Six months later, he was still in a maximum-security prison and no one on the outside knew where he was. He had been refused a phone call all that time, until one day when I was there, he got the chance. He dialled the only number in his head and, luckily, his mother picked up. Because the phone volume is turned up as prison policy, we could hear both Denis and his mum weeping aloud. Many of the inmates around him couldn’t help but cry too.

“I have looked for you in every prison across the country. Where are you? I thought you are dead!” she said. Denis told her he was in Kitalya. His mother said she’d come to the prison three times but was told her son was not there and that visits weren’t allowed because of COVID-19.

“Don’t worry, my son,” she said, before the call ended. “Even if it means selling everything I have, I will do it to get you out of there.”

According to Bobi Wine, hundreds of his supporters have been abducted in recent months. Many Ugandans now have harrowing stories of being picked off the streets by armed men in unlicensed vehicles, known here as “drones”. Some were well-known critics of the regime, expressing their freedoms of expression. Others were just in the wrong place at the wrong time.

Some of these individuals, like me, have been tried in court. But many others have been found beaten and tortured, turned up dead, or, like Denis before his fateful phone call, are simply unaccounted for.

President Museveni has either denied the abductions or insisted that those detained are criminals. But those who have been at the wrong end of his enforced disappearances first hand know the reality and the deep human costs of his repressive actions.

Covid-19 in Africa: Youth at the Fore

The Tale of Eritrean Withdrawal from Tigray: ...