Climate talks must pay more attention to African voices, not just of governments but of the people. 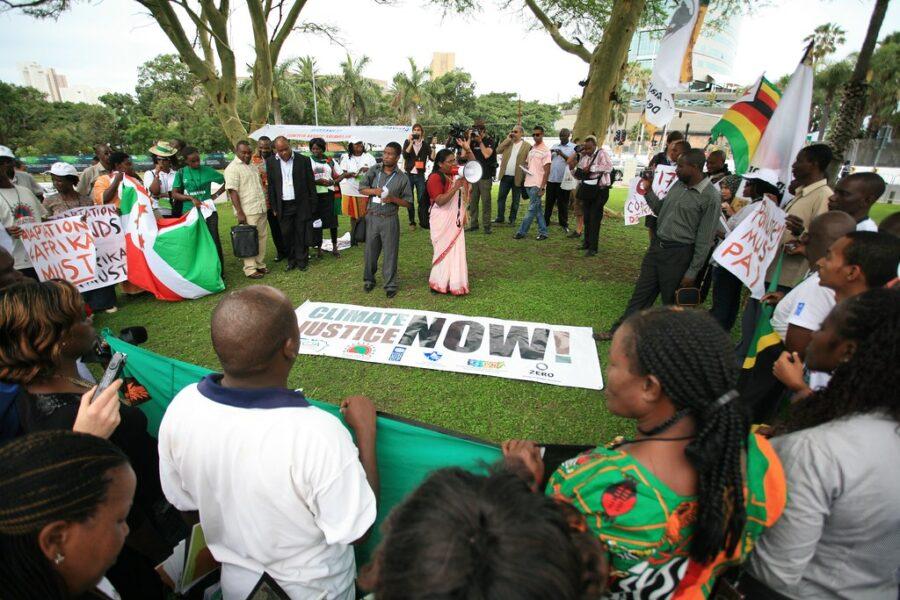 On 9 September, Kenya’s government declared a state of national emergency due to the devastating drought conditions pushing once-prosperous cattle herders into poverty,breaking up communities and triggering new disputes over land rights. At the beginning of this month, the UN’s World Food Programme warned that four years of drought had laid the groundwork in southern Madagascar for the world’s first climate change-induced famine. And in the Sahel, security experts and agronomists explain how the quickening tempo of desertification and drought has been pushing cattle herders further south into the Savannah areas, where crop farmers had previously dominated.

These crises, while scarcely new to Africa, are happening more frequently, and are now being complicated by the impact of the COVID pandemic which has severely impacted African economies. The social and economic pressures they cause risk exacerbating existing political tensions, precipitating new conflicts, driving some to support militant groups and others to flee.

Africa, in other words, is right on the front line of climate change. As we approach the COP26 Climate Summit in November, it is time that Africa’s situation is pushed up the agenda. Without faster, more effective action on climate change, both poverty and conflict are likely to increase, with heavy costs for the whole world. On the other hand, tackled head-on, there can be benefits for all. That is why Africa Confidential, International Crisis Group and the Royal African Society have combined to organise a conference on Climate, Conflict and Demography in Africa, to be held on 14 September 2021.

It is vital that these diverse threads are brought together, not separated out. The costs of failing to address climate change include not just the damage to the environment and livelihoods, but the misery of increased conflict. Even though COP26 has no session on security implications, these must be factored in to the global discussions.

Africa is also at the centre of the policy debate on energy. While rich in fossil fuels, Africa’s people are energy poor. At present, the entire continent of 1.3 billion people generates about the same electricity as the UK’s total capacity of 108 gigawatts.

Nigeria’s Vice President Yemi Osinbajo, a headline speaker at our conference, recently argued in Foreign Affairs that: “Energy use and emissions are so low in Africa that even tripling electricity consumption through natural gas would add just 0.6% to global emissions… despite the urgent need we are seeing wealthier nations issue blanket bans against public investments in fossil fuels, including natural gas”, while failing to invest in African renewables. Africa should be exempt from such bans, as continued poverty is not a humane solution to climate change.

So what should be done? That is what the conference will discuss. The debate about climate change needs to expand from the rich West, which can better afford to adapt, to the developing world, in Asia as much as Africa, which cannot afford to be left out. Finding a path to accelerate sustainable energy provision across Africa must be a priority goal of COP26, along with building the resilience of African communities and supporting their adaptation.

This will only happen if these global gatherings pay more attention to African voices, not just of governments but of the people, all those who need food, jobs, opportunity and hope. If they can only find these things by migrating or leaving their continent, that is what they will do.

Western economies are awash with new targets for cutting carbon emissions, or trading or even burying the stuff. Yet in so many of Africa’s 54 economies, still recovering from the pandemic, most of these concerns barely surface. The same holds true around the world where there is often a chasm between the green consciousness of officials in wealthy economies and their awareness of the practical implications of their policies in developing economies.

Yet there is much goodwill on all sides to craft viable responses, to find new technological fixes, to draw more effectively on the wealth of community knowledge and experience across the globe.

It is the hope of pulling in these ideas and enthusiasm for positive change that has been the driving force for our conference. Some of Africa’s and the international system’s most renowned experts will be contributing to the debates on 14 September. We urge you to get involved and make your views heard. These are issues on which none can remain silent.

Comfort Ero is the Africa Programme Director of the International Crisis Group. Patrick Smith is Editor of Africa Confidential. Nick Westcott is Director of the Royal African Society.