Meet the women and queer people sparking a revolution against the patriarchy through Arabic-language online platforms and sex toys. 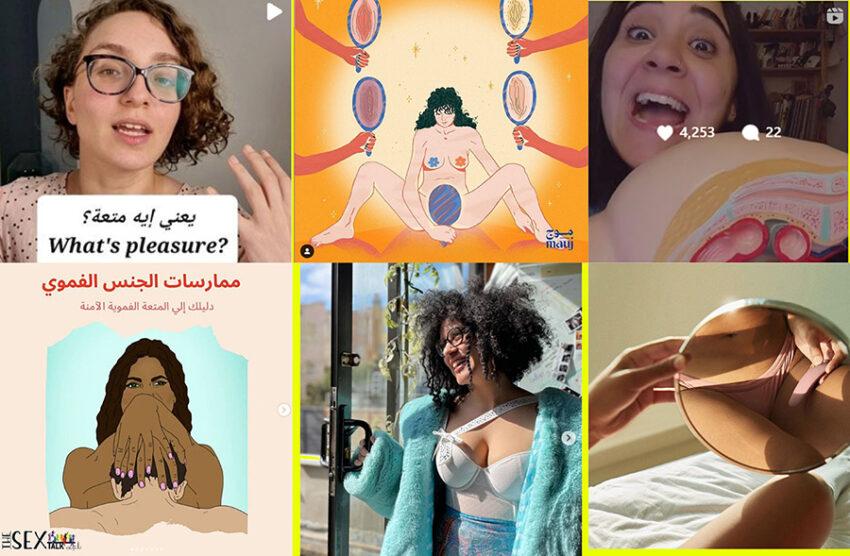 This January, just days after Egypt celebrated the 10th anniversary of the 2011 revolution, a 14-year-old girl died south of Cairo while undergoing female genital mutilation (FGM). Two months later, three men stormed into their female neighbour’s home armed with sticks and chains because they suspected her of having an extramarital affair. They subjected her to such torture that she threw herself from her balcony and died.

A decade after people across the region took to the streets to remove authoritarian leaders, a zealous determination to control female sexuality continues to kill women and girls in Egypt. Shortly after Hosni Mubarak’s downfall, I predicted that the military’s sexual assault of female activists in the form of “virginity tests” would spark a feminist revolution. I was ten years off, but it is now happening! Women and queer people are rising up against a form of tyranny even more stubborn than dictators in presidential palaces: patriarchy and its stranglehold on their bodies and sexualities.

The barricades of today’s sexual revolution are not to be found in the squares that reverberated with chants ten years ago. They are, instead, to be found on social media accounts that can be accessed by millions from the privacy of home, that place from which all tyrants spring and that is most in need of a revolution.

One of the catalysts for the 2011 uprising was the power young people felt from using Facebook to say “I count” as they protested the oppression of the state. Today, it is women and queer people saying “I count” through the deceptively simple declaration “I own my body” as they protest what I call the Trifecta of Patriarchy: the state, the street, and the home.

Fed up with hypocrisy and sexual repression, Egypt’s sexual radicals are confronting the shame and silence that undergird patriarchy. Still feeling the heady intoxication of the revolution in which millions of people issued a collective “Enough!”, they are throwing Molotov cocktails at the dictators of our mind.

Egypt’s revolutionary accounts take many forms. For example, the Instagram account Assault Police, founded in July by the 22-year-old Nadine Ashraf, has become the platform for hundreds of survivors to speak out about sexual violence at home, at work and in social circles. Followed by nearly 350,000 people, this has helped to smash taboos around sexual violence and expose predators.

Other Instagram accounts are aimed at ending the shame and silence that stifle desire and pleasure. These include sex educator Nour Emam’s Mother Being, with its 305,000 followers; Yasmine Madkour’s The Somatic Therapist, with nearly 40,000; and many more Arabic language accounts, some based in Egypt, some not, some anonymous, others not. In Egypt, where 87% girls are subjected to FGM with the goal of controlling their sexuality and there is no sex education in most schools, it is revolutionary and unprecedented to share knowledge in sex positive ways.

Fatma Ibrahim, a feminist researcher and PhD candidate based in the UK, says she started The Sex Talk after “trying to recognise and understand my own body and sexuality, gaining independence and fighting for agency over them, then realising that every woman should have this independence and this agency too”.

She had tried to find online platforms catering to Arabic-speaking women but could only find very conservative content focusing on pleasing men or reproductive health.

“None of them was centred around women’s needs and experiences, and none of them was from a feminist perspective,” says Ibrahim. “The content available was also provided in a complicated language that was not accessible for everyone, so I decided that I should create that alternative content I was hoping to find.”

“With society being as misogynistic as it can be, women’s sexual lives have become a nightmare for any woman who lives in Egypt and many other Arab countries,” she continues. “No pleasure, no protection, no consent and no support!”

The two co-founders of Mauj, who prefer to remain anonymous, were similarly inspired by a “first-hand need for more education, information, dialogue, and acceptance”.

“We are policed at every marker of womanhood and made to feel like our bodies are a source of shame and guilt, are off-limits, or are not ours alone,” says one of the women. “Tired of the shame, stigma, and misinformation surrounding our bodies, we decided to change the way we learned – and spoke – about ourselves.”

They decided to create Mauj (“wave” in Arabic), the first sexual and reproductive wellness platform of its kind by and for Arab women. The Instagram account, they say, “is the education we never received, but it’s also a call to return home to our bodies and embrace ourselves. Thanks to all the incredible, brave women who have joined us on the journey, Mauj is exactly what we hoped it would be: a wave of women coming together to change the tide.”

Shrouk El Attar, a queer Egyptian engineer who sought asylum in the UK, started the Dancing Queer account to campaign for LGBT+ people, including through the talk show “el Kanaba” (The Couch), which airs on Instagram Live.

“I started it because I didn’t see many things – if any – around me in Arabic… about LGBT+ that are positive and I felt I had this platform and this privilege of being able to speak about these things safely,” they say. El Attar’s guests have included queer and trans activists such as Dalia el-Faghal, Malak El Kashef, and Nour Hisham Selim.

“It was really hard to find anything in Arabic that wasn’t ‘they are hellbound’ or ‘they are the people of Lot/Sodomites’ and all of that stuff,” says El Attar. “It’s shit that I can’t use my own mother tongue, that I’m not as good at it or I’m not as comfortable speaking in it because my language was unkind to me.”

When sex and sexuality are enveloped in silence and taboo, the most marginalised are the most hurt. And the Trifecta of Patriarchy ensures it is women and queer people who are the most sexually marginalised. This is true both under Islamist movements like the Muslim Brotherhood and nominally secular governments. Egypt’s current regime has carried out the harshest crackdown against LGBTQ people in modern Egyptian history. The contest to outdo one another in “respectability politics” unites military regimes and religious zealots alike. Both see their role as guardians of not just national security but of women and queer people’s bodies and sexualities.

In this context, it is revolutionary for these groups to declare ownership of their bodies and sexualities. The weapons of their revolution against the Trifecta of Patriarchy come in many forms, but when consent, agency and pleasure are at the heart of the struggle, one is the sex toy, which is both weapon and manifesto.

Decades after the late Nawal El Saadawi first linked FGM to the aim of controlling female sexuality in her book Women and Sex, which was banned for almost two decades before its release in 1972, her successors are not just making that connection on social media sites but explaining how women who have been subjected to it can still enjoy sexual intimacy. Moreover, this June, Mauj launched Deem, the first-ever sex toy created by Arab women for Arab women.

“Deem was designed for pleasure and self-discovery. It’s a way to get to know your body, to connect with what you like and how you like it, and to learn to communicate that to your partner,” says Mauj.

If mobile and smartphones gave the world a front-row seat to the revolution in Tahrir Square one tweet at a time, then Deem – delivered in a discreet box that describes it as a massager – is taking the sexual revolution home, one orgasm at a time.

And it is about fucking time!

Mona Eltahawy will be in conversation with Leyla Hussein in Dismantling the Patriarchy, an Africa Writes headline event on Sunday 24 October, 17:00 – 18:30 (BST). Join live or in-person at the British Library.

Radical Activism in Africa is a special series about how people across the continent are responding to injustice, imagining alternative futures, and mobilising in transformative ways. The series brings together leading writers, activists and thinkers from across the continent. It is guest-edited by Stella Nyanzi with James Wan.

Tigray: One thing the warring parties and ...

The #EndSARS panels one year on: Was ...

Mona Eltahawy is a feminist writer, commentator and disruptor of patriarchy. She is the author of Headscarves and Hymens: Why the Middle East Needs a Sexual Revolution (2015).

About half of the oil being produced by Angola is in Congolese waters, according to the UN convention that defines maritime borders. Angola’s politics lives off oil. The natural resource ...
By continuing to browse the site you are agreeing to our use of cookies.