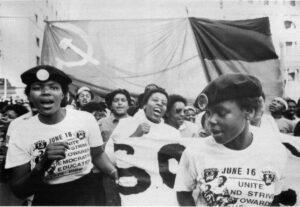 The above photo is from the magazine SPEAK (Issue 26, 1989). The original photo was taken by Anna Zieminski from the group Afrapix at a march organised by the Soweto Students Congress in Johannesburg

In April 2014 I sat in the home of a former anti-apartheid activist in Diepkloof, Soweto. My interviewee, Zanele, had been one of many young people in the township who joined the liberation struggle as a school student in the 1980s. The ‘comrades’, as young activists were collectively known, were the vanguard of South Africa’s liberation struggle during its final, turbulent decade.[1] They defended their communities when the military occupied the townships, using stones, homemade petrol bombs, and other rudimentary weapons to combat the military might of the apartheid state. Following orders from the African National Congress (ANC) in exile, they sought to make the townships ‘ungovernable’ by undermining or destroying apartheid institutions and inspiring others to join in mass political unrest. Zanele described how the comrades would attack local white-owned businesses – shops, liquor stores, and bus companies; how they would smash windows and burn cars. ‘The petrol bomb is very powerful,’ Zanele recollected, giving me a subtle smile.

The images conjured up by these recollections fit well with collective memories of South Africa’s 1980s township uprisings: masses of Black youths boldly confronting apartheid security forces, toyi-toying in township streets, and taking on the roles of militant (and at times overzealous) community leaders. Yet such popular depictions specifically bring to mind images of boys and young men. The ‘comrades’ are generally thought to have been a highly masculine group, characterised by their bravery, aggression, and willingness to use violence or die for the struggle. But my interviewee on that April day was a woman who had joined the struggle as a teenage girl alongside boys in her school and wider community.

Zanele was not the only female comrade in Soweto. As my new book Young Women against Apartheid demonstrates, many girls gave up their habitual lives as teenagers to fight against apartheid. Now middle-aged, these women are eager to share their past experiences and challenge the idea that girls and young women were absent from the township uprisings, confined to their homes while their brothers battled in the streets. While fewer in number than their male counterparts, these young women, or ‘female comrades’ as they called themselves, also protested in the streets, confronted security forces with stones and petrol bombs, and were detained, interrogated, and tortured by the apartheid state. The assumption that ‘youth’ as a term connotes only young men is a trend all too common in African history and politics.[2] Across the continent, studies of disenfranchised, politically active, or violent young people have frequently focused solely on men, with ‘youth’ requiring the prefix ‘female’ to include girls and young women. Young Women against Apartheid seeks to challenge this trend. My book demonstrates how young women’s activism was often motivated by the same political and economic grievances, social experiences, and desire for adventure or belonging as young men’s. As Zanele described, ‘Our heads were so hot, we didn’t want to be left at the back.’ If her male comrades ever discouraged her from joining dangerous or physically demanding tasks, she’d protest: ‘Why must we stay behind? … If you throw a petrol bomb, I throw one too.’ Yet, distinctly gendered inequalities, and girls’ adolescent experiences of inferiority and victimisation, also shaped why they joined the struggle. Their activism and political violence were used not only to rebel against the apartheid state, but also against their subordination as Black girls.

Perspectives such as Zanele’s do much more for our historical understanding than simply prove that girls and young women were involved in South Africa’s liberation struggle. They also force us to reevaluate our understanding of youth politics on a much broader level. They highlight issues often eclipsed or overlooked in men’s accounts of the struggle, such as the difficulties young comrades faced in trying to balance their overlapping yet often contradictory identities as children, students, and political militants. Zanele spoke at length about her struggles to be both a good daughter and good comrade. ‘It was a little bit difficult,’ she sighed, explaining how she could not attend political meetings and complete her daily chores at home. ‘Maybe it was easy for men but for us it was difficult, because I got beaten everyday by my grandmother. If I didn’t finish to do this [cooking, cleaning] … I was beaten, maybe in a week, thrice.’

These women’s accounts also expand our understandings of the primary spaces of youth activism, turning our gaze away from the street and towards the home, dismantling any neat binary between private and public spaces in political histories. Zanele spoke not only of her own struggles at home, but also those of other young people. She intervened in domestic disputes or helped children who were not receiving adequate care in her neighbourhood, travelling to the homes of children who reported their problems to her. She also advocated on behalf of girls at school who had been sexually harassed or assaulted by teachers. Her activities as a comrade thus stretched far beyond street confrontations as she took on these social work roles, fighting not only against the apartheid state but also gendered or generational abuse and discrimination in her community.

Furthermore, women’s accounts highlight the inconsistencies and unresolved tensions of youth politics. Much more so than men, women spoke candidly about the emotional difficulties of engaging in political violence and the lasting challenges they’ve faced in the aftermath of the liberation struggle. Zanele labelled herself a hero amongst her peers and was palpably proud of her past. Yet she also admitted that she has some regrets. Reflecting on attacking a white-owned bus company, she lamented, ‘but the driver of that target, it was someone’s parent. And that person, the driver, is not owning the company … It’s now that I recognize that no, we were doing the wrong thing, it was wrong.’ She also does not see her political efforts as an unequivocal success. While she is thankful for her own personal empowerment as a Black woman, she mourns the lack of progress made by other women in the country, and the sexism that continues to mar South African politics. ‘I’m not happy,’ she told me. ‘Okay, they are trying to balance the genders. But it is still there, this gender thing … there’s a hope that one day a woman will be the president. But it’s not happening.’ When I asked women if they would support their daughters engaging in political activism in the present, most said ‘no’, a surprising response given their intense pride in having fought in the liberation struggle, yet one that points to the ambiguous aftermaths of their political involvement.[3]

The stories told by women like Zanele thus offer us a different history of South African youth politics, one that is deeply personal, messy, and candid. Their narratives do not glorify the struggle or present an unequivocally rosy picture of a war won. Nor do they focus on what many may think to be the foundations of political activism – ideology, organisational structure, or leadership. Instead, they provide insight into how it felt to be a comrade, and the meanings this had for their personal and political lives, both in the 1980s and the three decades since. In doing so, they expand and complicate current histories of the struggle and force us to re-conceptualise youth activism.

[1]The term ‘comrade’ was used loosely in the 1980s to refer to or self-identify as a youth engaged in anti-apartheid resistance. It did not specifically connote an affiliation with international communism, however, the young activists discussed here all allied themselves to the African National Congress (ANC), which was closely tied to the South African Communist Party.

[3]These interviews were conducted in 2014 and early 2015, so before the more recent youth protest movements in South Africa such as #FeesMustFall.

Emily Bridger is a Senior Lecturer in Global and Imperial History at the University of Exeter. She currently holds a UKRI Future Leaders Fellowship titled ‘South Africa’s Hidden War: Histories of Sexual Violence from Apartheid to the Present.’