Instead, he may be a giant of marketing or of missed opportunities. 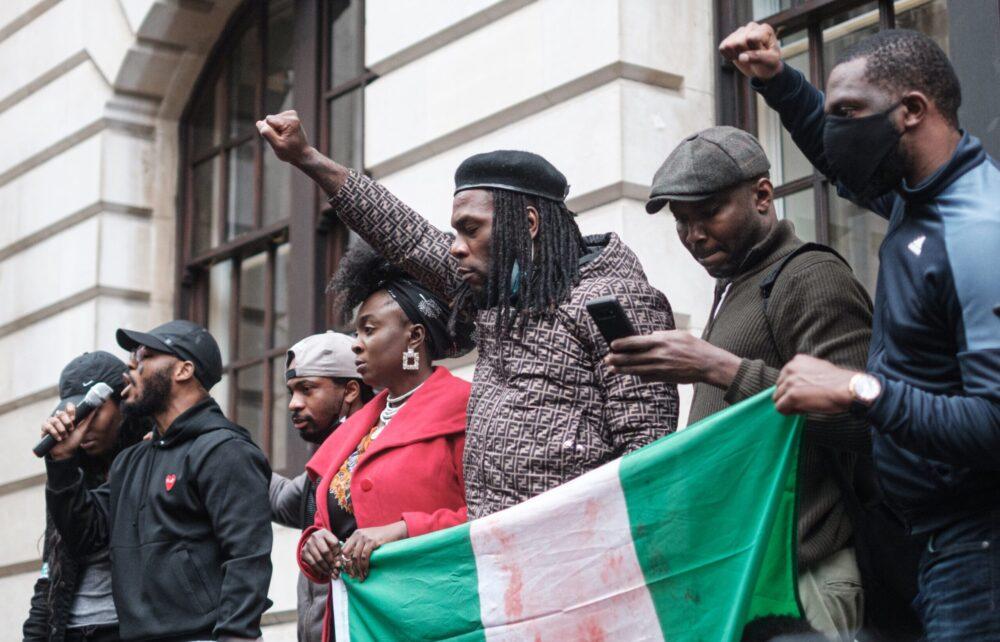 For years, Burna Boy has been carefully crafting his image as a socially conscious artist. From his breakout album in 2013, L.I.F.E: Leaving an Impact for Eternity, to his latest Grammy award-winning record from 2020, Twice As Tall, he has made clear his political positions with some common themes: Global Black power and pride. Critique of Western imperialism. A social and political revolution within Nigeria.

He says Nigerians should stand up against their government and routinely samples Fela Kuti’s politically charged music when doing so. On “Collateral Damage”, a song off his 2019 album African Giant, Burna Boy recycles some of Kuti’s most popular lyrics – “My people sef dey fear too much/We fear the thing we no see,” – from the 1977 classic “Sorrow, Tears and Blood“. Burna Boy was echoing Kuti’s critique of docility among the Nigerian populace and lack of mass outrage when it comes to the government’s excesses.

But what Burna says and does are two different things.

When Nigerians came out en masse during the October 2020 #EndSARS protests against police brutality and bad governance, he was largely absent. He didn’t speak out until he was practically bullied into showing solidarity. His eventual intervention – announcing a fund to assist protesters harmed by security operatives – was received with a too-little-too-late shrug. And not only is he apathetic, but he endorses the crony capitalism of the likes of billionaire Aliko Dangote, whose cement empire was built on well-documented government nepotism, in his songs.

Burna Boy tells his African audience not to seek Western approval. In 2019, he accused the American music festival, Coachella, of not respecting his place as an “African Giant” after they announced his appearance with his name in “small” font (it should have been bigger, Burna argued). On the song, “Monsters You Made”, which berates Western imperialism and colonial education, he yells “fuck Mungo Park”, a dig at the Scottish explorer credited with “discovering” the River Niger.

Yet recently, Burna Boy has been unabashedly courting Western appeal. He boasts about not changing his sound for an international audience but he has made shrewd adjustments to it since 2018’s Outside, diversifying his musical influences (EDM, funk) and working with foreign producers. “Monsters You Made”, for instance, is alien to the grit and throb of the sounds that gather under the Afrobeats umbrella, which was his mainstay. The song was, naturally, more or less ignored at home despite arriving as young people kicked off the #EndSARS movement.

His run-up to the 2021 Grammys triumph is a clear example of playing for Western validation. After African Giant lost to Angelique Kidjo’s Celia the year before, an admittedly upset Burna Boy took notes and drew up a strategy. On his next album, Twice as Tall, he enlisted Sean Combs (aka Diddy) as executive producer who sourced contributions from certified hitmakers Timbaland and Anderson. Paak. We also hear Diddy himself throughout the album sharing rhetoric like “Black Love/It’s that real love”. Combs is of course familiar to folks at the Recording Academy that decides the Grammys. So are his murderers’ row of collaborators. Twice as Tall also houses Burna Boy’s most ambitious sound experiments since Outside, the record that kickstarted his quest for crossover appeal.

Burna Boy himself has previously more or less admitted he did what he had to. He learned from Kidjo, he shared on Twitter. In 2007, the Beninese singer won the first of her four Grammys after collaborating with veteran American producer Tony Visconti and artists such as Alicia Keys, Josh Groban, and Carlos Santana for her terrific album Djin Djin.

So what if he is not as political as he claims?

It does matter that Burna Boy is not who he says he is.

For one, it says a lot about the Western music industry – for all its supposed progressiveness and inclusivity – that an unimpeachably talented artist like Burna Boy has to tweak his sound and pack his work full of well-known collaborators to be fully celebrated. The past crossover attempts of his Afrobeats peers Wizkid and Davido were not as successful, and both have since chosen to focus on their Nigerian audiences.

Burna Boy’s newer musical direction also seems to be in step with his image as a socially conscious “Black power” artist, which also reads as marketing for a Western audience. Perhaps this is also why he identifies as an “African Giant”, taking on the needless burden of representing an entire continent.

Second, Burna Boy being political in words, and not in action, closer to home is a missed opportunity. There is no shortage of locally relevant issues that could use the amplification and attention of a figure like Burna Boy. His home state, Rivers, for instance, could use his advocacy in tackling the chronic soot pollution that has claimed the air.

This would be more in line with the legacy of Fela Kuti, whose music, imagery and anti-establishment sentiment Burna Boy co-opts in his own output and interviews. However, unlike Burna Boy, Fela was actively involved in the struggle for democracy. He threw his body, soul, and resources – usually at great existential risk to himself – into opposing oppression, dictatorship, and corruption of the political class. Burna Boy puts no skin in the game. He doesn’t even mind being seen with politicians that he claims are oppressing ordinary people.

Ultimately, however, Burna Boy doesn’t have to be political, at least not in the way he has gone about it so far. The primary attraction to him remains the same for old fans and new converts alike. The music is and always has been enough.

What well-trodden routes to power tell us ...