Critics say state-backed farming cooperatives have become a tool for recruiting people into the ruling party and are sowing division. 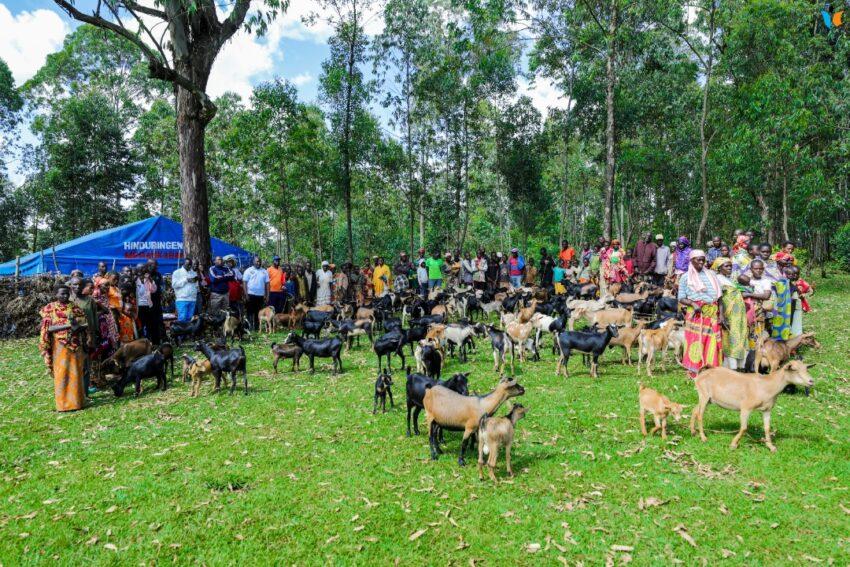 Members of the Sangwe cooperative of Rugazi Hill, Burundi, collecting goats they bought with their government loan. Credit: Jimbere Magazine.

When Jean Niyangabo, 33, returned to his hometown in Muhuta, southwest Burundi, a few years ago, he resolved to begin farming. He had run out of money in the capital Bujumbura trying to pursue a university degree and he wanted to find any opportunity to make a living. Starting a business, however, was far from straightforward.

“I had a strong desire to raise small livestock, but I lacked access to capital,” he says.

After repeated disappointments, Niyangabo decided to join his local Sangwe cooperative, a state-supported community organisation. Like all members of the group, he eventually received a goat worth about 140,000 Burundian francs ($70). The goat has since produced two litters and Niyangabo hopes to continue expanding his herd.

“Given the poverty in which we live, we must work together to develop ourselves,” he says. “Sangwe cooperatives have brought fresh hope to millions of unemployed persons. Thanks to them, we will achieve our dreams.”

Over in Cibitoke Province, northwest Burundi, Dieudonné Nzohabonayo, in his 40s, was in a similar position. He too decided to join a cooperative and was given some livestock – at least for a few days.

“I received a pig as a result of Sangwe cooperative activity, but the local representative of the ruling CNDD-FDD party seized it,” he says.

Nzohabonayo, who is a member of the opposition CODEBU party, says the official told him he had to join the governing party to enjoy the benefits of the Sangwe. Its support, he was told, was reserved for long-time party members or uwindani.

“By design, Sangwe cooperatives are beneficial for CNDD-FDD members only,” says Nzohabonayo.

Since taking office in June 2020, President Évariste Ndayishimiye has made development one his priorities. Following five years of deadly unrest in Burundi, he vowed that “the war for peace is won, now we have to win the war against poverty”. He said that “every mouth must have something to eat and every pocket must have money”.

One of his administration’s strategies for reaching this goal is to support people through Sangwe cooperatives, which replaced former cooperatives in 2019. These new local associations were set up across Burundi’s 3,200 hills – the country’s third-order administrative units – and each given a loan of 10 million Burundian francs ($5,000) to start their activities.

Sangwe cooperatives are part of the government’s ambitions to promote agriculture and livestock as key pillars of sustainable development in a country in which 90% of the population lives off these sectors. They are also intended to help reduce unemployment, especially among the youth. 63% of Burundi’s population is under-25 and the unemployment rate in this demographic is over 55%.

Nearly two years into President Ndayishimiye’s term, however, many say that Sangwe cooperatives have become political instruments for recruiting members into the ruling party. Critics says that association meetings are often held at CNDD-FDD offices and led by authorities associated with the ruling party. Some have complained of being denied benefits of cooperative activity due to being members of the opposition.

“We expected that inhabitants of the same locality would form a cooperative and its activities would solve common problems,” says Moise Yamuremye, chair of the Transversal Chamber of Young Entrepreneurs of Burundi. “This is not the case. [Sangwe cooperatives] became assets of the ruling party…People are even obliged to wear ruling party badges to participate in meetings.”

Gabriel Rufyiri, Chair of the Anti-Corruption and Economic Malpractice Observatory (OLUCOME), says the cooperatives disproportionately benefit CNDD-FDD members despite them being publicly funded.

“The cooperatives are financed by the government, which uses the funds generated from contributions and taxes levied on population,” he says. “They should be beneficial for everyone.”

The government denies these allegations of bias. In a meeting with Sangwe officials in November 2021, Speaker of the National Assembly Gelase Daniel Ndabirabe insisted that cooperatives “are not a property of the CNDD-FDD party as some believe”. “The creative idea comes from this party but is implemented by the Government of Burundi in the interest of all citizens,” he continued.

Roger Ngabirano, a director at the National Agency for the Promotion and Regulation of Cooperative Societies in Burundi, similarly rejects suggestions of favouritism. “We have not heard any grumbling about it,” he says. “I think these complaints are unfounded because cooperative societies are inclusive.”

For opposition members like Jimmy Gatoto, however, there is little doubt who is eligible to benefit from the state-backed cooperatives. “I prefer not to participate in Sangwe activities rather than betray my CNL party,” he says.

In many ways, President Ndayishimiye’s inauguration in 2020 marked the end of a dark period in Burundi. Under the final term of his predecessor, Pierre Nkurunziza, hundreds of dissidents were killed, several media houses were shutdown, and hundreds of thousands of people fled the country. Ndayishimiye reversed many of these policies and ushered in a more inclusive and open environment.

Analysists warn, however, that unfair access to economic benefits and a lack of transparency in the governance of Sangwe cooperatives risks undoing improved social cohesion with potentially dangerous effects.

According to political scientist Guillaume Ndayikengurutse, development initiatives have been politically manipulated under previous administrations too. The resulting sense of exclusion has been one of the major driving forces behind Burundi’s cyclical crises.

“The same causes produce the same effects,” says Ndayikengurutse. “Excluded people will seek to claim their rights in an unconventional way as was the case in the past.”

“If we want to develop our country, the government must ensure equitable value sharing of wealth and resources, in compliance with Article 69 of the Burundian Constitution,” he says. “If the Sangwe cooperatives remain run as they are today, they will destroy rather than build the country.”

Mauritius: How did the pyramids of Plaine ...