“Too little for too much”: The story of Uganda’s shrinking Rolex

Higher food prices due to the war in Ukraine have prompted vendors to offer smaller portions, leaving customers with half-empty stomachs. 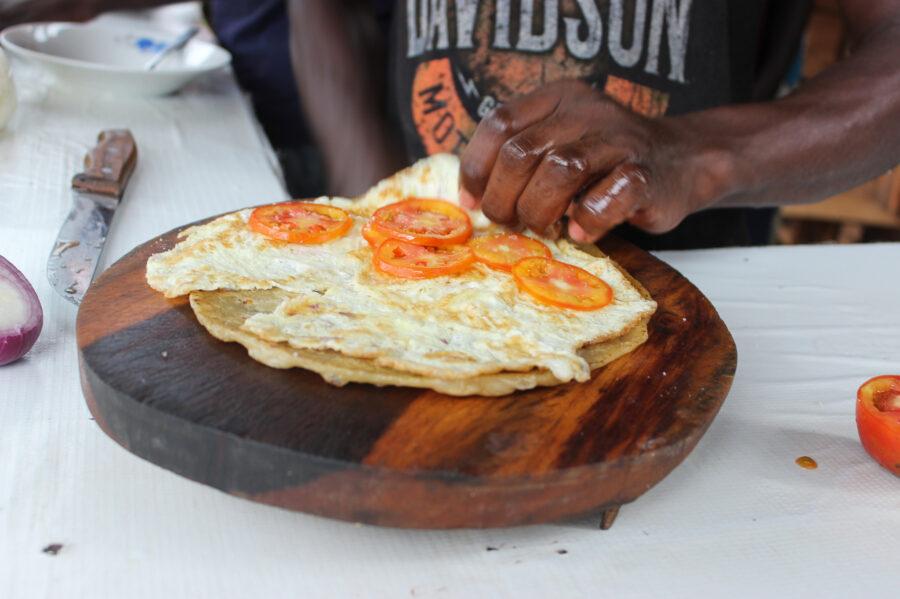 Godfrey Kizito takes a break from his busy shoe repair shop every day so he can enjoy his favourite snack, a vegetable and egg omelette rolled in a freshly prepared chapati known as a Rolex. But for the past few weeks, this daily ritual has given him neither the satisfaction nor the sustenance he is used to consuming. Kizito says this much-needed staple has shrunk in size.

Most streets and markets in Uganda have at least one vendor firing up a hot plate ready to cook the Rolex, short for rolled eggs, which usually comes with tomatoes, cabbage and onion and is priced anywhere from 1,000 to 2,000 Ugandan shillings ($0.28-0.57). Street vendor Farouk Kiyaga says many of his customers share Kizito’s disappointment over the dwindling size of Uganda’s most popular street food, but Kiyaga is struggling with the rising cost of wheat and cooking oil.

Russia’s invasion of Ukraine has halted exports out of the two countries, which account for about 26% of wheat exports globally and about 80% of the world’s exports of sunflower oil, pushing prices to an all-time high, according to the UN Food and Agriculture Organisation (FAO). Not only oil and wheat are affected. Prices of the most consumed foods worldwide, such as meat, grains and dairy products, hit their highest levels ever in March, making a nutritious meal even harder to buy for those who already struggle to feed themselves and their families. The FAO warns the conflict could lead to as many as 13.1 million more people going hungry between 2022 and 2026.

Uganda is one of almost 50 countries dependent on Russia and Ukraine for some wheat imports. More than half of Uganda’s imports of this vital grain come from Russia and Ukraine, and the shortage is being felt by the country’s street vendors, who rely heavily on wheat and cooking oil to produce their main offerings of Rolex, chapatis and Kicomando, another chapati wrap with beans. To meet the rising costs, many vendors are reducing the size of their offerings, leaving customers hungry and lacking the nutrients that would normally get them through their workdays.

Zziwa Fred, who runs two fast-food businesses in central Uganda’s Wakiso district, says his daily wheat costs have gone up 9,000 shillings (about $2.50) since March and the price of a 20-litre jerry can of cooking oil, which lasts him three to four days, has risen by 82,000 shillings ($23).

“I can’t increase the price of the Rolex, but I have reduced its size because my customers will not buy my snacks, they say they don’t have the money,” says the father of three, who works from 7am until 10pm every day making and selling his chapati-based offerings.

The chapati has been a staple in east African countries since Indians introduced it through trading and then settlement during the colonial era. It’s served not only as a wrap but as a scoop for many of the countries’ dishes. The flat bread is cheap and readily available but also provides essential nutrients. In 2007, the Ugandan government started fortifying wheat and cooking oil after it was determined that nearly 70% of the country’s residents were deficient in key vitamins and minerals because they couldn’t afford fish, eggs, meat and milk. In response, 95% of vegetable oil is now fortified with vitamin A, and 40% of flour is fortified with iron.

“People’s quality of life is being compromised because now many have to take less nutritious meals because that is all they can afford, to some extent missing out on nutrients found in Rolex and Kicomando, such as proteins, carbohydrates and vitamins,” Nuwagaba says.

Uganda’s Ministry of Health didn’t respond to requests for a comment.

Mugaga Semugoma, a construction worker in Wakiso district’s Kabulengwa village, says he no longer buys Rolex and chapatis as frequently as he used to because of the decrease in quantity and quality. “In previous years a Rolex and Kicomando of one chapati was enough for my breakfast; now it’s not,” the father of three says. “So, I have opted to take porridge five times a week and a Rolex once or twice a week because that is all I can afford.”

Winnie Namugga, an English literature student, eats a Rolex for breakfast or lunch every day. Normally that would keep her going until the next mealtime.

“The decreased size makes it challenging for me to buy my favourite snack because it feels like I am buying too little for too much,” Namugga says. “I am a student, I live on a budget, so buying more to feel satisfied is quite expensive for me, so I have to eat what I can afford even if it means having a less full stomach.”

Uganda does produce its own wheat but not enough to meet the country’s demand. In 2020, the country spent $119 million on wheat imports and earned only $3,380 on wheat exports. Nuwagaba suggests halting Uganda’s exports of wheat and cooking oil to meet demand but admits this may not help the increase in prices.

John, a marketing manager for one of Uganda’s wheat flour processing companies, says 100% of its wheat is imported from Russia, through brokers in London, and he is concerned the price will continue to rise.

John, who didn’t want his full name used as he’s not permitted to talk to the media, says the company previously placed its wheat orders six months in advance but hasn’t been able to do so since March. Economic sanctions the UK has placed on Russia prevent the company from buying its wheat through London brokers.

In response to the rise in food prices, the Ugandan government says it will continue to support farmers to grow vegetables and grains such as wheat and corn. It also has partnered with 40,000 farmers in northern Uganda to grow sunflowers and soybeans for the production of cooking oil.

Matia Kasaija, minister of finance, planning and economic development, acknowledged in a statement that commodity prices were a global issue beyond policymakers’ control. He said the government will work with Bank of Uganda, the country’s central bank, to monitor inflation and ensure it stays within target.

Kizito hopes prices will go down soon. Until then, he will have to get used to working on a stomach that is only half full. He refuses to stop eating his favourite snack — the Rolex.

In Praise of African Technocrats

Nakisanze Segawa is a Global Press Journal reporter based in Kampala, Uganda. She specialises in reporting on issues of health and human rights.