Joint Ugandan-Congolese military exercises may have more to do with securing roads and oil than rooting out rebels. 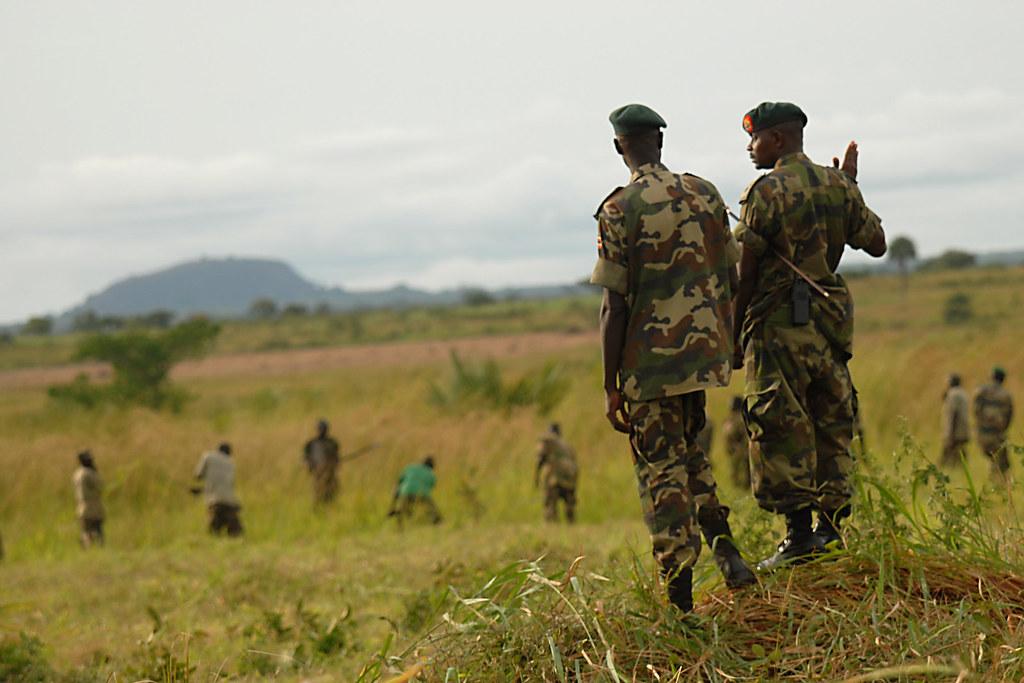 Since the start of Operation Shujaa in the eastern DR Congo, attacks by the ADF rebels have increased. Credit: Rick Scavetta, U.S. Army Africa

On 16 November 2021, three suicide bombers denotated their vests in Kampala, two near parliament and one near police headquarters. At least four people were killed and 37 wounded in the blasts.

Soon after, the Ugandan government claimed the attackers were linked to the Allied Democratic Forces (ADF), a rebel group that emerged in the 1990s in Uganda and has resided in the Democratic Republic of Congo (DRC) since 2000. The bombings were also claimed by so-called Islamic State (IS), to whom ADF pledged allegiance in 2019. In preceding weeks, IS had claimed responsibility for attacks against a pork restaurant and police station too.

In the wake of these events, President Yoweri Museveni declared that “the terrorists invited us and we are coming for them”. On 30 November, the Ugandan and Congolese armies launched joint air and artillery strikes against ADF camps. This collaboration between the Uganda People’s Defence Force (UPDF) and Armed Forces of the Democratic Republic of the Congo (FARDC) was later formalised in a defence and security agreement on 9 December. The joint military operation was named Operation Shujaa.

Since then, barely any information has emerged about the operation, with both armies remaining tight-lipped. The little that has transpired has been uncritical praise. In March 2022, for instance, President Museveni called Operation Shujaa a “total success” and said the UPDF had  “demolished the terrorists”. The next month, Muhoozi Kainerugaba, commander of the land forces and Museveni’s son, tweeted that “the joint UPDF-FARDC forces of ‘Operation Shujaa’ have completely removed ADF from the bases they occupied for more than 22 years”.

Does this triumphalism correspond with the reality? And is there more to the operation, and the motivations behind it, than meets the eye?

Has the ADF been defeated?

Despite Museveni and Muhoozi’s claims, the ADF retains the ability to carry out major attacks. On 10 and 11 April, for instance, the rebels killed over 30 people in two villages in Ituri province, DRC. The group has conducted assaults nearby to FARDC and the UN mission MONUSCO’s bases. Moreover, the ADF has returned to the border region in the Rwenzori mountains, which it used in the late-1990s and 2000s to launch attacks into Uganda. On the night of 3-4 April, the group killed at least 32 people in Rwenzori sector’s Masambo village, one of the ADF’s bases in the 1990s.

As a military analyst who asked to remain anonymous noted, “the irony is that the attacks have come closer to the Ugandan border than we’ve seen in the last decade. The ADF is moving back to positions where they launched attacks along the border. The operations might make Uganda less secure, although it remains to be seen whether these locations will be used to attack Uganda. For now, the attacks target Congolese civilians.”

Detailed data from the Kivu Security Tracker echo this concerning trend. They recorded 119 ADF attacks in March 2022, compared to an average of 95 per month in the eight months preceding the start of Operation Shujaa in November 2021.

Given this trajectory, some Congolese politicians have raised concerns about the impact of the military exercise and the role of the Ugandan army. A recently released report by the Congo Research Group (CRG) on Operation Shujaa asks similar questions. It concludes that the UPDF not only lacks the capacity to structurally dismantle the ADF in such a vast territory – something the UPDF commander admitted as much in an interview – but also does not seem to have this ambition. What then is the goal of Operation Shujaa?

What is the real goal of Shujaa?

The CRG report show how road building is central to Uganda’s military operations. Around the same time as its offensives began, road construction started as part of a project operated by the Ugandan company Dott Services and co-financed by the Ugandan and Congolese authorities (in which the company pays for 60%, and Uganda and DRC 20% each). Military operations are occurring in the same areas as the road works and fanning out from these construction axes.

The Ugandan authorities have themselves presented the military activities and infrastructure works as closely intertwined. The Congolese and Ugandan generals in charge of Operation Shujaa officially opened the road project. Additionally, a UPDF spokesperson has explained how the army’s only intervention against M23, another armed group in the eastern DRC, occurred when the rebels wanted to attack the road infrastructure equipment. One diplomat who asked to remain anonymous summarised this situation as “the UPDF presence primarily having an infrastructural imperative”.

Interestingly, a recently released UN Group of Expert report shows how Uganda and the DRC signed a military agreement to both defeat the ADF and secure road rehabilitation works as early as April 2021. The CRG report meanwhile explains how in October 2021, one month before the Kampala bombings, a similar Memorandum of Understanding was signed, allowing Ugandan troops into Congo.

What do we know about these projects?

The company carrying out the road works, Dott Services, is described by one analyst as “Uganda’s Halliburton”, i.e. as a primary manifestation of Uganda’s military-industrial complex. A recent report describes the company as being close to Uganda’s first family, while press articles have long documented the firm’s contested past. In 2017, for instance, the Observer newspaper called for a parliamentary investigation into Dott Services as it “always wins road construction contracts despite evident flaws in their work methods” and asked “why no punitive action is taken when they fail to meet their end of the bargain on the projects that they commit to”.

It is notable that Dott Services has recently signed a series of other contracts in eastern Congo. These include a deal for the exploitation of seven mines in Maniema province with the Congolese state mining company Sakima, and a project to rehabilitate a hydro-electric plant in Kisangani, both signed in 2020. It also emerged recently that Dott Services is trying to get an aviation license, most likely for flights to its activities in eastern Congo. All this reveals strong economic interests underpinning a military presence, without which the road infrastructure works would not be possible in the highly insecure region.

Roads are not the only economic incentive in the region. The CRG report points out how Uganda also has important oil deposits in its Western region, bordering the DRC. After years of protracted negotiations around these resources, an investment deal worth $10 billion was finally struck this February by President Museveni, Tanzania’s President Samia Hassan, TotalEnergies, and China National Offshore Oil Corporation. Once extracted, the oil is set to be transported to the Tanzanian coast via the 1,443km-long East Africa Crude Oil Pipeline (EACOP), an ongoing construction project led by TotalEnergies.

Both Uganda’s oil exploitation and EACOP are highly controversial due to their environmental and human rights impacts. However, TotalEnergies is unlikely to give them up, especially given dwindling reserves in its other African oil deposits such as in Gabon or Angola. Nor is the Ugandan government likely to waver; the promised oil revenue is crucial to the Museveni regime.

As with road construction, a key factor in the success of these projects is security. An attack on the oil installations would jeopardise the multi-billion investment, and both TotalEnergies and Uganda want to avoid a “Cabo Delgado scenario” in which an insurgency badly disrupted TotalEnergies’ gas project in Mozambique.

In the case of Ugandan oil and EACOP, the biggest security threat comes from the eastern Congo; both the oil deposits and oil refinery are located close to the Congolese border, and Operation Shujaa can be understood as a means of securing the border. This reading makes sense of the fact that its primary goal does not seem to be the structural dismantling the ADF but, as the CRG report points out, the creation of a buffer zone against the rebels and other armed threats.

Who else stands to gain?

Another significant actor with a clear interest and role in these dynamics is France. Previous reports have shown close links between TotalEnergies and the French government in Uganda, where Paris is seen to operate primarily to protect the interests of the French oil major.

Concretely, France has trained both Ugandan and Congolese troops who are now participating in Operation Shujaa. The UPDF soldiers in that force are mostly from the mountain brigade, which the French military has been training since 2016 and which has explicitly stated that the protection of oil is central to its existence. Several Congolese troops participating in the operation have also been trained by France in jungle combat, described by the French Ministry of Defence as “specifically aimed at targeting the ADF”.

More generally, France is increasingly seen as an uncritical supporter of the Museveni regime, amid its major oil interests. A striking example is a letter written by President Emmanuel Macron to President Museveni after the 2021 elections. Those elections were considered widely fraudulent, with an election campaign characterised by killings of protestors and around 1,000 abductions of perceived opposition supporters. Yet – and much to the surprise of other European Union (EU) member-states – the letter was completely uncritical, instead emphasising the wish to “deepen the friendship between the two countries” and Macron’s wish to “fast-track the construction of the East African Crude Oil Pipeline”.

Interviews in Kampala highlight how France is seen as giving explicit political support to Operation Shujaa. Interestingly, these conversations also suggest that France has approached several European countries to test the possibility of financing Uganda’s presence in DRC through the EU’s European Peace Facility. France also tried to facilitate such a deal for Rwanda after its troops intervened in Cabo Delgado and, in so doing, protected TotalEnergies’ Mozambican operations. Diplomatic sources say the EU is currently considering this proposal – a “concept note” to support Rwanda with €20 million ($21 million) in non-lethal equipment – after France’s lobbying.

Kristof Titeca is an associate professor at the Institute of Development Policy, University of Antwerp. He works on governance and conflict in Uganda and Congo. His latest book is Rebel Lives. Photographs from inside the Lord’s Resistance Army.