Governments “protect” wildlife from the very people who have conserved it for centuries, while allocating mining concessions in the same areas. 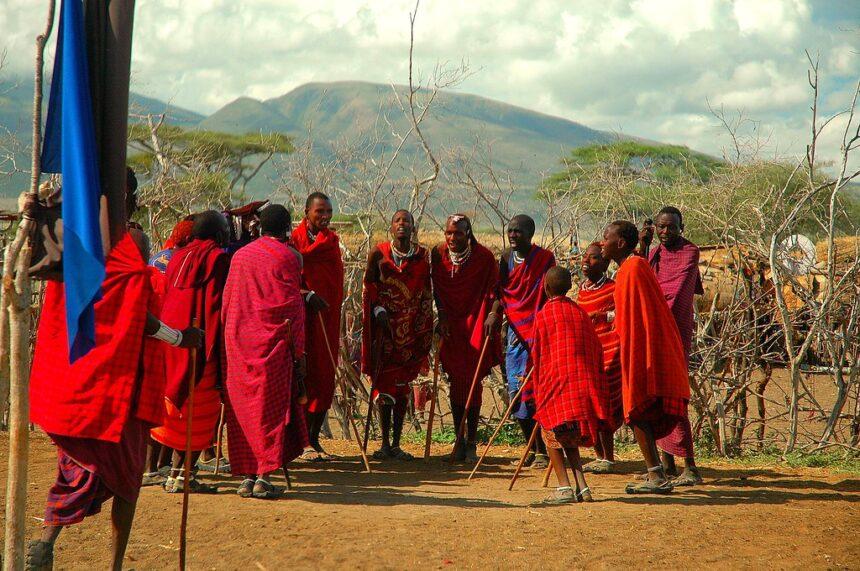 The violent eviction of the Maasai community in Tanzania to create a game reserve recently drew widespread shock and condemnation. Credit: Dylan Conway.

Outside Africa, many people’s first encounter with the continent is through images of wildlife in savannahs unfolding across their TV screens – the mortal dramas of lions chasing zebra while vast herds of wildebeest wheel and stampede with awe-inspiring force.

These documentaries have given generations an appreciation of nature’s wonders, but they also contain an oddity: the total absence of Black people. As Kenyan conservation ecologist Mordecai Ogada has pointed out, in the European portrayal of Africa’s wildlife, African people are “vanished” from the landscapes they have inhabited and managed since the dawn of humanity. A continent is presented as a vast wilderness, devoid of humans, who are only ever mentioned as being a threat to wildlife.

This fundamental myth reflects a deceit that dates to the early 20th century when President Roosevelt designated the first of the US’ national parks. These protected zones were supposedly natural wildernesses but were in fact largely areas from which Indigenous nations had been violently expelled.

Efforts to expand national parks in Africa, especially by American conservationist organisations such as the Wildlife Conservation Society, have been explicitly modelled on Roosevelt’s policies. Protecting Africa’s charismatic megafauna such as elephants, lions and rhinos, was the impetus behind the creation of international conservation groups such as the World Wide Fund for Nature (WWF). Along with other private groups such as African Parks, these NGOs are now responsible for managing vast areas of Africa.

The almost entirely internationally-driven expansion of Africa’s Protected Areas accelerated in the 1990s and has continued apace since. A 2010 UN target to put 17% of land in Protected Areas worldwide was nearly achieved in sub-Saharan Africa by 2018. Some countries, such as Botswana and Tanzania, have more than double this proportion of land designated for wildlife protection.

Of course, this “protection” is directed mostly against Africans themselves. Whereas the establishment of a National Park in Europe would normally require much consultation and accommodation of local residents, this is almost never the case in Africa. Summary evictions of inhabitants, including farmers and those with ancient grazing or hunting rights, have occurred across millions of square kilometres. And as the numbers of conservation refugees huddled around the outskirts of parks has grown, so has the intensity of enforcement. Under the guise of anti-poaching efforts, the quasi-official “buffer zones” around many African parks are now characterised by running conflicts between increasingly heavily armed rangers with unlimited shoot-to-kill powers and increasingly angry and impoverished dispossessed locals.

Conservationists constantly claim that they’re now much more respectful of Indigenous and other local people’s rights. But the recent violent eviction of thousands of Maasai from their homelands in Tanzania to create a game reserve has highlighted that fortress conservation is still the preferred approach. This particular incident attracted international condemnation, but outside of the headlines, barely a month passes without new and shocking reports of serious human abuses perpetrated by the guards of one protected area or another.

Whether all this “conservation” has conserved Africa’s wildlife is very unclear. Many large parks are located far from where the real threats to nature are, and there has been much duplication of efforts to protect the same limited number of tourist-attracting species. As was eventually realised in the US, some supposed wildernesses start losing wildlife value when traditional land management practices (especially the controlled use of fire) are stopped. While local communities have been brutalised by Protected Areas’ authorities, governments have often allocated highly destructive oil, mining, agro-industry, and logging concessions in and around the very same parks. And many areas of abundant wildlife devoid of their traditional human custodians have attracted large-scale commercial poachers; not infrequently, their deadly activities are aided by the very guards supposed to be protecting animals.

Wildlife protection in Africa is fast heading for a crisis. International donors – such as the European Commission, Germany, and the US, which have heavily funded fortress conservation over the last six or seven decades – are facing ever-greater scrutiny of their human rights consequences. They are realising that the powerful and often poorly managed conservation militias they have helped create are a danger in and of themselves. The effectiveness and sustainability of the whole approach is increasingly coming into question.

Rather than business as usual therefore, a proposal to increase the Protected Areas target to 30% of the planet by 2030 – as has been discussed under the UN Convention on Biological Diversity for the last two years – should be the catalyst for a serious pause. It should be a moment to reconsider what exactly international conservation is trying to achieve, and the best ways of doing so. The scientific evidence that more Protected Areas will help save biodiversity is, at best, flimsy.

The consequences of 30×30 could be calamitous for millions of Africans. The mostly rich countries still backing the plan are still ignoring this fact, but there is fortunately a trend towards action elsewhere. The victims of conservation are becoming increasingly connected, organised, and vocal. Calls for justice, and for recognition of Indigenous and local peoples’ rights to custodianship of their own land – a proven way of conserving wildlife – are growing ever louder. Younger people in rich countries, rightly concerned about the fate of the planet, are starting to reject the colonial and sometimes implicitly racist undertones of a conservation narrative that places a higher value on a zebra’s life than it does an African person’s.

Government negotiators need to listen to these voices, realise the era of colonial conservation should be brought to an end, and abandon the 30% target.

What will it take for monthly rent ...

Simon Counsell is an advisor to Survival International and the former director of Rainforest Foundation UK.