Since primary education was made free in 2019, there has been a steep rise in both numbers of students and teachers working for nothing. 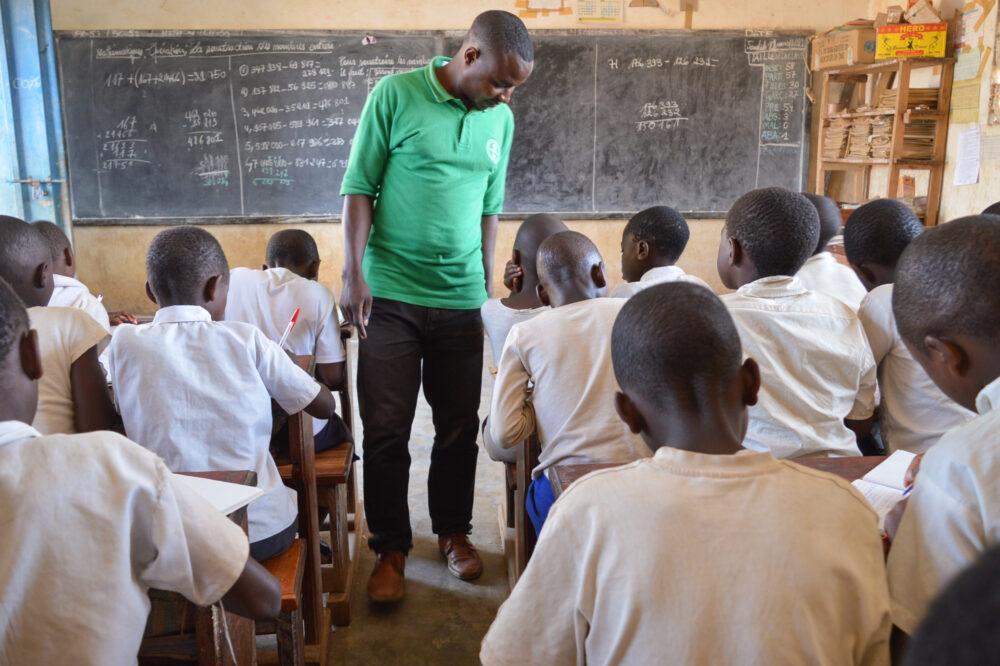 Kakule Sivyaghendera, who has been a primary school teacher for nine years, teaches in Lubero territory, North Kivu, DR Congo. He has never been paid a salary. Credit: Merveille Kavira Luneghe/GPJ.

Kakule Sivyaghendera has been an elementary school teacher in Kirumba for nine years.

He has yet to be paid.

“I have to work in a field after classes if I want to provide for my family,” he says, adding that his wife’s income as a seamstress also helps support their three children.

For years, DRC’s public schools have relied on unpaid educators like Sivyaghendera. Many work in exchange for a small portion of tuition fees, in hopes of eventually joining the government payroll and earning the official paycheck, currently about 230,000 Congolese francs ($115) per month. Since September 2019, the government has begun paying at least 195,000 more teachers, but more than 315,000 working teachers still remained unpaid as of November 2021.

Today, these unpaid teachers say they are worse off than before, because the country’s free education policy forbids asking parents to cover any school costs, including teacher salaries.

“No one is allowed to ask for alms, material goods or any kind of assistance from parents in support of teachers,” says Richard Paluku Muvunga, director of the Ministry of Primary, Secondary and Technical Education’s Kirumba subdivision. “Anyone who fails to abide by the rules will face the full force of the law.”

In the Kirumba school district, where close to 40% of primary school teachers are unpaid, full compensation would require another 184.2 million francs ($92,110) per month, he says.

The government raised its spending on education from about 12% of the budget in 2017 to about 22% in 2021, according to the World Bank, and conducted a national teacher census to identify, screen and integrate qualified teachers into the payroll. But the education budget for 2022 has fallen to 17%. School funding has also been diverted by fraud and corruption in the education sector, including flooding the payroll system with “ghost teachers”, who exist only on paper but receive a salary, according to a 2020 World Bank report.

“The policy of free education faces many challenges in its implementation on the ground,” states a November 2021 review by the various education ministries and the Permanent Secretariat for Support and Coordination of the Education Sector, which outlined “the need for additional classes, the lack of school equipment and teaching materials, the recruitment, training and remuneration of teachers (including new units, teachers in service but not paid) as well as the operating costs of schools and management offices”.

Muvunga urges patience and creativity from school faculty and administrators until the government can afford to pay all teachers.

“Every teacher will eventually get paid by the government,” he says. “In the meantime, schools should find alternative solutions to support teachers financially — even if it’s only a small fraction of their salaries — such as breeding guinea pigs, for example.”

At the risk of losing their jobs, some school principals have encouraged donations during weekly worship services while trying to find other ways to compensate their faculty.

“Every month, we ask the children to bring 1 kilo of dried cassava chips,” says the principal of a Kirumba school where four out of 20 teachers are unpaid. (He requested anonymity for fear of losing his position.)

Another Kirumba principal, Rose Kahambu Kavughe, says she lost her job last year when authorities discovered that she had asked paid teachers to chip in to help their unpaid colleagues. Now at a new school, at age 62, she is risking her position again to ensure that the four unpaid teachers on her staff don’t go home empty-handed.

“Every teacher on government payroll has agreed to give 5,000 Congolese francs [about $2.50] of their salary to those who receive no income,” she says. “On top of that, pupils collect gravel that we sell.”

Esther Kahambu Kazi, a teacher at Buhimba primary school in Kirumba, says she depends on such charitable gestures. “I live off small contributions from colleagues who get paid,” she says. “Maybe the windows of heaven will open for me one day. I’m really struggling.”

Government officials have expressed confidence that the long-term benefits of free primary education will make up for these growing pains. These hopes have not taken into account that class sizes have exploded, however, as facilities and staff sizes have not expanded to account for the millions of additional students.

Before the change, in 2016, 62% of families with a child not attending school cited the cost as the primary barrier, according to a survey conducted by the national statistics office. Jean Baptiste Mumbere Bayilanda, vice president of the Kirumba Civil Society, a community organisation, says that free education has been a salvation for the region’s parents, although it has stretched resources and led to overcrowding in classrooms.

“The population is very happy about this free education because we live in poverty,” he says. “The problem is that there are teachers who have become victims of this measure because they are not paid by the state.”

For Divine Kavugho Kanyihata, a mother with a child in a Kirumba primary school, free basic education has been a great relief, although she feels sorry for the unpaid teachers who must find other ways to support their families.

“Our children are now studying freely,” she says. “May this measure continue.”

Several short-lived teacher strikes have taken place in 2021 and 2022, as talks continue between union leaders and the government to include all working teachers on the payroll.

“Unpaid teachers sacrifice their lives to their work. We will continue our talks with the government to ensure all teachers get paid,” says Lambert Kasereka Saasita, former member of the Congo Teachers Union and permanent secretary of the Lubero branch of the Democratic Confederation of Labor, a national trade union that protects labour rights.

For unpaid teachers like Kazi and Sivyaghendera, who feel that education is their calling and have limited employment options elsewhere, all they can do is keep wishing and waiting.

“I keep hoping that I’ll get paid one day,” Sivyaghendera says. “As the saying goes, a patient man will eat ripe fruit.”

Why Tunisians must boycott the vote on ...