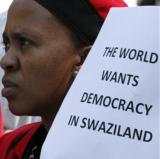 An activist a placard during the protest outside the Swaziland Consulate in Johannesburg, South Africa on Wednesday Sept. 8, 2010. A group of about 20 activists under the umbrella of the Swaziland Democracy Campaign protested against Swazi King Mswati III who is accused of repressing human rights, and harassing and jailing pro-democracy activists. (AP Photo/Themba Hadebe)

“We owe the dead the debt of memory.”  A little past 9pm on 21 September 2021, Salako Pelumi and his friend John, both students of the University of Ilorin, were ...
By continuing to browse this site, you agree to our use of cookies.