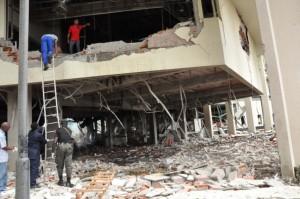 Ruins of the UN building in Abuja after attack in August

An extremely violent Islamist group based in north east Nigeria, Boko Haram has emerged as a significant factor in Nigerian politics and security. Once confined to Maidugri – and driven partly by regional politics – it has now struck in other parts of the north and in the capital Abuja at the centre of Nigeria. Recent attacks in Damataru and Maidugri have claimed over 200 lives.

Two years ago the government claimed victory after the death of its leader, Mohamed Yusuf, after a battle at its headquarters in Maidugri. Film showed the police randomly executing civilians, and apparently murdering Yusuf whilst in police custody. Problem solved said the government. They could not have been more wrong. Boko Haram has re-emerged, more numerous, better armed and utterly ruthless. It is able to access easily deployed weaponry such as hand grenades and small arms as well as more sophisticated explosive devices delivered as car bombs, sometimes by suicide bombers. In August, it bombed the UN building in Abuja. Deploying across a wider area, it has launched head-on attacks on police and army.  This suggests increasingly sophisticated co-ordination and the development of internal organisation as well as substantial financial and material backing.

Since 2001 and the start of the US-led War on Terror the temptation has been to interpret all domestic Islamist groups through the prism of international terrorism. This is plausible. Boko Haram or a faction of it – it may not be a monolithic organisation – has had contact with members of Al Qaeda in the Islamic Maghreb (AQIM) and even the Somali “˜Al Shabaab. But the local may be more important than the global. A more fruitful interpretation comes from an examination of Nigerian domestic politics rather than global jihad.

The north-east of Nigeria has been largely excluded from developmental gains that have, to some extent, occurred in other regions of the country, notably the economically explosive region around Lagos. Boko Haram’s central demand – the imposition of Sharia law in Northern states – suggests a rejection of the values of westernising Nigerian society that has produced obscene largesse for a few. In addition, the re-election this year of President Goodluck Jonathan, a Christian Southerner from the Delta region, seemed to further signal the decline in the North’s political power. Since independence the northern political elite have been the deciding factor in who rules the country. In forming the Peoples Democratic Party the northern elite helped create a national party which made sure that power was circulated – rather than shared – so each area took it in turns to be President and “chop” (steal from the public purse).

In the lead-up to this year’s election the north argued that since its President, Umaru Yar “˜Adua, had died in office, they should still retain the presidency. But Goodluck Jonathan, the vice president and a southerner, outmanoeuvred them and was elected President in April. Northerners voted heavily for General Muhammadu Buhari, a northerner and former president who stood aside from the PDP and formed his own party.  But he made almost no effort to campaign in the south where his party barely existed and he lost heavily. The resulting fear and anger in the north was expressed by mobs who attacked the houses of prominent PDP leaders.

That anger may also be feeding Boko Haram. However, it is not, or does not appear to be, an organisation run or supported by rich and powerful political figures though it does receive funding from outside Nigeria we are told by Western security agencies.  It is a local political movement now fighting a national campaign to pursue its ends. Its recruitment of predominantly unemployed, poorly educated young Muslim men is made possible by the national political failure to provide jobs, health or education. When northern primary school teachers were recently given a national primary-level exam, nearly all of them failed it. Unemployment in northern cities is extremely high. Without a decent future, young men are easily drawn into fanatical movements.

Military action alone will not defeat the movement. The speed at which the organisation recovered from its “defeat” by Nigerian security services in 2009 shows the problem is far from solved. The only long-term solution is the development of the region.