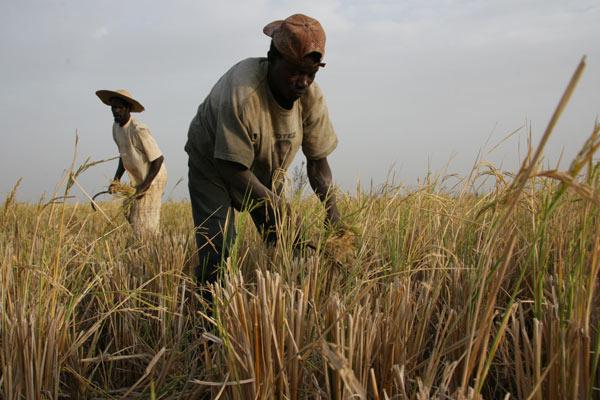 Just two years after the Sahel faced a major food crisis, leaving an estimated seven million people in need of food aid in Niger and Chad, the alarm bell has sounded again. Following poor and erratic rains in the 2011 growing season (June – October), the World Food Programme is already noting a worrying increase in the price of millet – up to 37% more expensive on some local markets in Niger than in the same period last year.

Oxfam figures suggest there is up to a fifty per cent cereal deficit in Mauritania and Chad, and it’s calling on national governments to prepare emergency food stocks for distribution. UNICEF is warning that up to a million children could be facing malnutrition.

Many are asking how it can be that severe malnutrition and the collapse of local food markets seems likely again in such a short space of time?

When I visited Niger in August (2011) the situation looked more positive – the rains up to that point had been about average and there was optimism from several aid agencies that the advent of democracy under the new government of Mamadou Issoufou would lead to a political reality where hunger could be discussed seriously.

Former President Mamadou Tandja caused furore in 2005 when he lashed out at the use of the word “˜famine’ when Niger was in the middle of another crisis, saying that food shortages were not unusual in his country. Although there has been some sympathy with his frustration at the loaded nature of the word, and that Niger was forever being associated with classic images of listless babies with distended stomachs, humanitarian actors generally agree that his government (from 1999-2010) could be difficult to deal with and reluctant to admit it couldn’t cope.

Issoufou’s government has been praised for a more pragmatic approach and openness with aid agencies. In July they began preventative measures such as relieving the tax on food imports, selling some of its reserve stock at a fixed price and giving free veterinary care to animals.

But the speed with which a reasonable assessment in August has turned to dire warnings by December shows just how precarious the situation is in Niger. The rains began to falter in late August and September, leaving crops at risk. On marginal lands with little irrigation, many farmers could do little but look at the sky and hope.

Across the Sahel, population increase and change in settlement patterns is putting pressure on fragile ecosystems – for instance in Chad the population has grown around nine million in 2000 to 12 million in 2010. In the east of Chad, two hundred and fifty thousand refugees from Darfur have been slowly stripping the bush surrounding their camps for firewood; Darfur itself has sometimes been described as one of the first real resource conflicts. From Mali to Mauritania, the nomadic way of life is slowly being replaced by more sedentary communities – fertile land is turning to dust as people living in the transitional zones between the Sahel and the Sahara cut down trees for charcoal and send their animals just a little further out into the bush in search of the most luscious pasture.

Hassan Baka from the Association for the Strengthening of Animal Husbandry in Niger (AREN) says that large amounts of land in these transitional zones have become degraded by over-grazing and deforestation. He is calling for a re-drawing of the map to show how far south the less productive Sahelian belt has encroached, as some land policy of today is based on assessments made in the 1960s.

Climate change too could be playing a part, although it’s difficult to draw clear conclusions. We know for sure that severe droughts have been a reality for this region for many years – in the 1970s and 80s a prolonged drought shattered nomadic communities in northern Mali and Niger; (Colonel Gadaffi exploited this situation to train up Tuareg fighters who had seen their livelihoods collapse).

Anecdotal evidence suggests that the rains have become weaker and more erratic over the years, meaning long term stress on human and natural systems which take longer to repair themselves. This is certainly a factor in Niger – Hassan Baka estimates that many of the families who practise a mix of crop cultivation and animal husbandry may have lost up to 50 percent of their livestock in the 2009 crisis – it takes time for new animals to be born and reach maturity. In this context it’s easy to see how any small fluctuation in usual weather patterns can wreak havoc.

Time and energy needs to be spent developing sustainable agriculture in these marginal regions, which have faced an unenviable series of barriers to accessing the market. African farmers are often unable to compete with the cheaper prices from subsidised European and US farmers, and the new problem of land-grabbing for the production of bio-fuels seems to be further eroding Africa’s ability to feed itself. However, a number of successful irrigation and farming projects in places like the Niger River delta in Mali, which grow sparkling emerald rice fields in the middle of the desert, show that with a degree of technical know-how the Sahel can be productive even if it doesn’t rain.

But farming in places like Niger is still very hard work, and without these technologies the land is often only productive for four months out of twelve. Many young men have chosen not to break their backs tilling dry and unforgiving soil, but have left for Europe or to work as hawkers in African cities. The isolated Kanem region of Chad for example, where global malnutrition rates have been over the 15 percent crisis threshold for many years, has seen huge numbers of young men leave to work in the capital N’Djamena. In a cruel twist, the crisis in Libya in the last year has caused an estimated one hundred thousand Nigeriens and many thousands of Chadians to return home destitute, no longer able to send remittances to help the families who stayed in the village.

Blame has also been laid on the growing insecurity in the Sahel. The Tuareg rebellions in northern Niger and Mali of the 1990s and early 2000s have largely been replaced by the threat of Al-Qaeda in the Maghreb which has been kidnapping foreigners and clashing with security forces across the Sahara for the last few years. Reports suggest that Libya’s civil war has also led to an influx of small arms and former fighters to the border regions between Mali, Libya, Chad and Niger. However while these security threats may cause aid agencies to restrict some of their activities, the number of ordinary families affected is likely to be relatively small due to the sparse population in these zones.

We are often told that there is enough food to feed the world; it’s just getting it to the right place. This has been shown time and again by organisations such as WFP who, given enough financial support, have been effective at stopping catastrophe in the Sahel. They are able to get emergency stocks in place quickly, while other aid agencies such as Save the Children and Action Against Hunger move in with therapeutic feeding and nutritional support for those in most need. It’s likely that a disaster on the scale of Somalia will be averted in the Sahel in 2012 if appeals for funds bear fruit.

But is it time to move away from emergency interventions? The reasons for food insecurity in the Sahel are many and complex, but governments such as Mahamadou Issoufou’s in Niger, and Amadou Toumani Toure’s in Mali, can be supported in their efforts towards self-sufficiency. This region is only likely to become more precarious as the effects of climate change and increasing population kick in. Is it enough to make appeals at the last minute and then wait for it all to happen again?