DR Congo: The International Community Must Not Turn Their Backs On Democracy – By William Townsend, Free Fair DRC 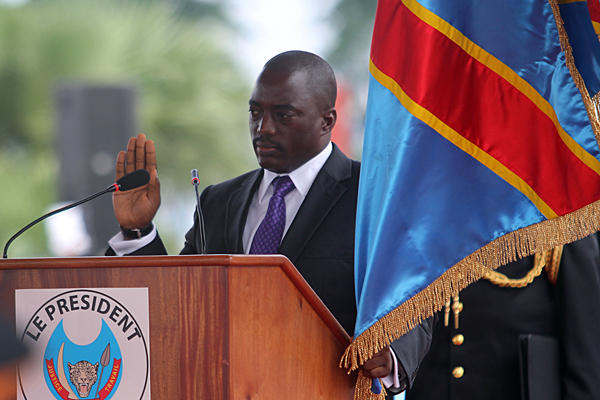 Last week, the Supreme Court in the Democratic Republic of Congo upheld the result of what was by all accounts a deeply flawed election, marred by widespread irregularities, violent incidents, and reports of fraud. Despite calls from the international community to delay the inauguration of the anointed winner – incumbent Joseph Kabila – the swearing in ceremony went ahead on Monday, amid palpable tension in the capital, Kinshasa. As a clear signal of the uneasiness of the international community in response to the election, Zimbabwe’s Robert Mugabe was the only foreign head of state in attendance.

With the leading opposition candidate – Etienne Tshisekedi – planning his own inauguration “by the people” this Friday, the situation in the DRC is becoming more volatile by the minute. The international community must take urgent action to help avert further instability and bloodshed.

Following Kabila’s initiation yesterday, US Secretary of State, Hilary Clinton, issued a statement saying that the United States was “deeply disappointed” that the Supreme Count had upheld the election results without “fully evaluating widespread reports of irregularities.” Those words must now be met with action on the part of the US, the United Kingdom and other international actors. A group of highly respected NGOs, including the International Crisis Group, the Enough Project, and the Eastern Congo Initiative have called for the deployment of an independent international mediation commission, which would help facilitate a solution to the current crisis. British support for such a mission is urgently needed and the response must be more than to simply defer any recommendations for improvements for next time.

Meanwhile, the government of the Congo is keen to portray the situation as returning to normal. Police chief, General Charles Bisengimana, has recently said that the capital is “calm, life is getting back to normal and people are going about their business.” The General is undoubtedly correct, for now. Yet this period could very well be the eye of the storm. With so much at stake and amid allegations of widespread fraud, few were expecting ratification of the results to be met with quiet acquiescence.

Indeed, to those who have followed the elections in the DRC closely, it is clear that the situation is unlikely to be resolved peacefully without international pressure. Frustration has been mounting following the declaration of the election results. The blocking of SMS services across the country, lethal attacks on opposition supporters and the reported abductions of civilians by the security forces led France’s Foreign Minister, Alain Juppe, to describe the situation as “explosive” whilst US Senator, Christopher Coons, who presides over the Senate Foreign Relations Subcommittee for African Affairs, noted unequivocally, “this is a moment of great risk.” As tensions continue to rise in the DRC and the Congolese security forces prepare for possible clashes, the international community must make it very clear that violence from all sides will not be tolerated and call for restraint in handling any unrest.

The situation remains too complex to predict with confidence how the coming days will play out, but the propensity for escalation and for the armed forces to quickly lose control amid intense protests has already been observed. Human Rights Watch has recently recorded confrontations that resulted in at least 18 civilian deaths, whilst 100 more were seriously wounded – the majority of those killed were shot dead by the President’s Republican Guard soldiers. The potential for future violence clashes should not be underestimated and independent arbitration may now be essential to avoid a repeat of more lethal clashes.

At present, donor states should be left frustrated with what journalist, Howard French, has so eloquently described as “a bridge to democratization that was paid for but never got built.” But it is not too late to act and turn the tide in the DRC. With billions of pounds, dollars and euros heading for this central African republic over the coming years, now is not the time to blithely further instability and bloodshed. Our financial and moral commitments to the Congo mean that we cannot absolve ourselves from this responsibility. The DRC is a country of great promise, with an estimated natural wealth measured in trillions-of-dollars, but good governance must be recognized as the basis for which this African leviathan can be transformed into a functioning state with lasting infrastructure. If the Congo remains robbed of the opportunity for free and fair election, its potential will remain little more than a cruel illusion.