Terror and other challenges in the Sahel: Don’t ignore the local – By Kamissa Camara 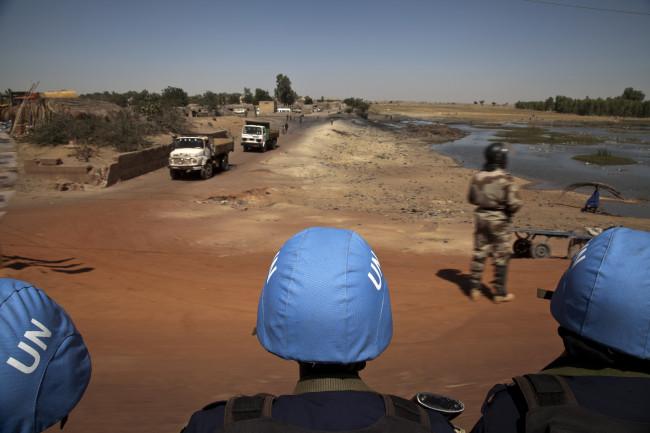 A UNSC delegation drives through Mopti on a visit to the region.

“The challenges faced in the Sahel do not respect borders and, therefore, neither can the solutions,” UN Secretary General Ban Ki-moon has correctly observed. Narcotics and weapons seep across Sahelian borders effortlessly, as do some of the baleful consequences, especially population displacement, humanitarian crises and environmental stress.

Mr. Ban visited the Sahel region in late 2013 along with World Bank President Jim Yong. While his observation might be true in the case of terrorism, trafficking and armed conflicts leading to the spillover of refugees in neighboring countries, the structural fragilities of the governments of this region do in fact respect borders. Before becoming debilitating regional threats to the stability of the Sahel, issues of terrorism and armed conflicts started as poorly managed domestic challenges. While keeping this in mind, the quest for sustainable results in the Sahel may imply revisiting the roots of its seemingly unsolvable crises.

Fragile democracies, low and precarious standards of living, a harsh climate jeopardizing livelihoods, weak and corrupt governments, artificial and porous borders, security threats in the forms of human trafficking, drugs and arms smuggling and radical religious factions are some of the most prominent difficulties encountered in this region of approximately 150 million inhabitants. Located between the Sahara desert to the north and the Sudanese Savanna to the south and extending from the West African coast to the Horn of Africa, the strategic and geopolitical importance of this region has become undeniable to Washington and its European partners.

When the Community of Sahel-Saharan states (CEN-SAD) was established in 1998, its initial goal was the creation of an economic union based on an integrated development plan among and between all member states. Seven years later, the United States launched the Trans-Sahara Counterterrorism Partnership (TSCTP) enhancing the capacities of the Sahel states to cooperate and combat terrorism. Exclusively focused on security, the TSCTP differs remarkably from the most recent European Union Strategy for Security and Development in the Sahel (2011) and the United Nations Regional Integrated Strategy for the Sahel (2013). The latter have designed comprehensive “integrated” approaches tackling the development-humanitarian-security nexus specifically in Mauritania, Mali, Burkina Faso, Niger, Nigeria and Chad. Unfortunately, as sophisticated as these strategies might be, the people of the Sahel have had very little input or influence in their development. Worth noting is the strategies’ quasi-exclusive focus on external threats, potentially undermining key internal dynamics and overlooking country particularities, which must in fact determine successful implementation of any comprehensive strategy.

The March 2012 military coup that toppled the democratically elected President of Mali, Amadou Toumani Touré, was a direct consequence of the fall of Libyan dictator Muammar Gaddafi a few months earlier. The ensuing loss of two thirds of Mali’s northern territory to Al-Qaeda linked Islamists and separatist rebels triggered a multidimensional French-led military intervention which soon enabled the transitional government of Bamako to regain two out of three lost territories. The intervention has yet to bring home the last rebel stronghold of the northern region of Kidal. A categorical refusal to cooperate, long-time grievances and a lack of recognition of the central government on the part of rebel groups testify to the intricacy of endemic, country-specific problems. The structural complexities of Mali, a vast, landlocked country hosting a multitude of ethnic groups, certainly contributed to this great divide between its northern population and its central government.

Whether Boko Haram, the infamous Nigeria-based terrorist group, is affiliated to jihadist groups outside of Nigeria has long been disputed. The Sunni militant group has caused thousands of deaths in one of the most populated countries of the Sahel and the U.S. State Department has recently labeled it a terrorist organization. The group has often asserted that it is in the midst of a “war against the government of Nigeria,“ the world’s eighth largest oil exporter. The Nigerian government’s inability to distribute wealth and services in its northeast region is, in reality, one of the main drivers of insecurity.

The problems facing the Sahel are enormous and complex. They will only be resolved, if at all, by sustained, indigenously-tailored efforts over time. The large size of most Sahel countries, as well as the multitude of ethnic and religious groups in the region, also calls for carefully implemented decentralization efforts providing greater autonomy to local governments.

With a fast growing population, the Sahel promises to become ever more important. As massive donor funding targets the region, donors risk promoting a misconceived one-size-fits-all approach, overlooking country specificities and root causes. If the crises that have more recently haunted the Sahel did anything, they laid bare the fragility of its states. Creating more responsive local governments within bigger states and generating greater democratic control will necessarily lead to more secure borders, better local management, and eventually, greater socio-economic development.

Kamissa Camara is an Africa political analyst and program officer at the National Endowment for Democracy (NED). She previously worked for the International Foundation for Electoral Systems (IFES) where she oversaw electoral assistance projects in sub-Saharan Africa and the Caribbean. The views expressed are her own and do not reflect those of the National Endowment for Democracy. Follow her on Twitter @kamissacamara