Electoral commissions, the battle for the control of social media, and a hesitant international community could define many of the political stories of the coming year. 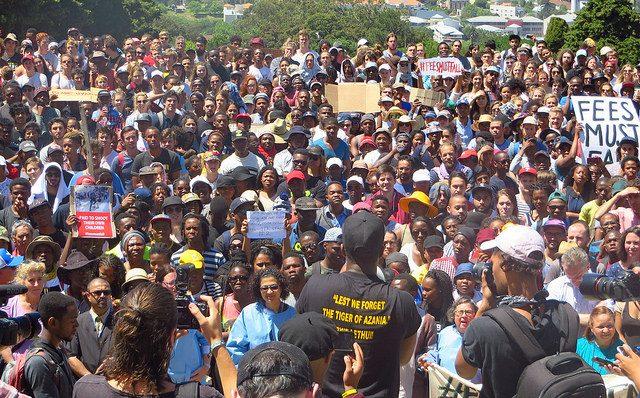 Grassroots activism will be central to the many of Africa’s political contests in the next twelve months. Credit: Tony Carr.

What does 2017 have in store for African politics? This is not an easy question to answer. For one thing, Africa has a habit of surprising us, making fools out of many a political forecaster. For another, the distinctive histories and political contexts of the different countries on the continent defy easy generalisation.

Over the last twelve months, for example, Africa witnessed two very different trajectories at the same time. In one, presidents in countries such as Burundi and Rwanda entrenched their hold on power, overturning presidential term limits and repressing opposition parties. In another, presidents in Gambia and Ghana lost elections, which gave African democracy a much-needed shot in the arm – at least until the outgoing Gambian leader, Yahya Jammeh, changed his mind.

[Gambia: Why the army may be the key to getting Jammeh to step down]

The next year is likely to witness similar diversity, serving as an important reminder – if it were needed – that Africa is not a country. However, if a theme does emerge from these different pathways, like the thread that holds together a complex necklace, it is likely to be one of intense political contestation.

In other words, 2017 is set to be a year in which ruling and opposition parties face off in “too close to call” elections and struggle over the rules of the political game. While some of these processes will be carried over from 2016, important new arenas of contention will also emerge that will shape the development of African politics for years to come.

[Things may have to get worse to get better in Africa. They certainly got worse in 2016]

The rules of the game: from term limits to electoral commissions

As opposition parties gain ground, contestation over the rules of the political game is only likely to increase. Recently, one of the main focal points of this struggle has been presidential term limits. In the last two years alone, presidents in Burkina Faso, Burundi, the Democratic Republic of Congo, and Rwanda, have sought to extend their stay in power, leading to conflict with opposition parties and civil society groups. However, in 2017 the focus of government/opposition tensions is likely to shift away from term limits towards the independence and competence of electoral commissions.

Although the fate of President Joseph Kabila in the DRC – who has served two terms and would like a third – is yet to be settled, there are few other term limit crises on the horizon.The reason for this is that presidential elections are only scheduled to take place in Angola, Kenya, Liberia, Rwanda, Sierra Leone and Somalia this year.

Term limits will not be an issue in Kenya because President Uhuru Kenyatta is in his first term, or in Rwanda where President Paul Kagame has already secured the right to stay in power. In Angola, the term limits introduced in the new constitution were not applied retrospectively, while in Liberia the ruling party has already announced that it will be running a new candidate, defusing any controversy. This leaves Sierra Leone. In early 2016, supporters of President Ernest Bai Koroma started to test the waters for a third term bid, claiming that he needed “more time” in office to complete projects that were interrupted by the Ebola crisis. However, since then, this ploy appears to have been effectively rebuffed by a strong coalition of opposition parties and international donors whose grants and loans make up around 40% of government expenditure.

In the absence of term limit crises, attention will turn to the competence of Africa’s electoral commissions. General elections in Kenya, Liberia and Sierra Leone are expected to be hotly contested, and in all three countries a close race is likely to test the independence and capacity of electoral management bodies.

This is a cause for concern because the credibility of the electoral process remains in doubt in much of Africa, especially in Kenya where opposition legislators recently called its supporters to the streets to oppose changes to the electoral laws. A similar situation may well transpire in the DRC should elections be held later this year as envisaged in a recent deal between the government and opposition parties. Unless leaders in states like these are willing to embark on a genuine programme of building trust in key institutions, 2017 is likely to be to witness disputed elections and further allegations of democratic backsliding.

The growing use of social media in Africa represents a boon for civil society groups and opposition parties. Last year, the continent saw the rise of political and social movements such as #thisflag in Zimbabwe and #feesmustfall in South Africa, which were driven in part by the ability to use new technologies to quickly communicate ideas and information in the absence of formal political structures.

In 2017, an increasing number of civil society groups and political parties will integrate social media into the heart of their campaigns. However, while the potential for Twitter, Snapchat and Facebook to substitute for traditional methods of political mobilisation is an exciting prospect, it is important not to exaggerate the significance of this trend or the vulnerability of ruling parties to new technologies in 2017.

To start with, the penetration of the Internet is limited in many countries and this is unlikely to change much over the next twelve months. For example, while more than 25% of Kenyans and Nigerians own smartphones, this figure drops to 4% in Ethiopia and Uganda, and 11% in Tanzania. Given this, the prospects for such technologies to strengthen the position of opposition parties, or to act as a check on corruption, is limited.

A second problem is that in 2017 governments will start to respond to the challenge of social media more effectively. This process has already begun in many countries, where political parties sponsor supporters to tweet and call in to radio shows as if they are ordinary citizens, shaping what are supposed to be organic debates. This year, these strategies will gather pace as governments in more authoritarian states learn from one another about how best to regulate and manipulate new forms of communication.

For example, following an example set by Gabon, Zimbabwe is set to introduce Cybersecurity legislation that the government claims is simply designed to protect national security but which critics have alleged represents an attempt to control the media and flow of information. A similar debate is currently underway in South Africa, where the ruling ANC’s attempt to introduce a deeply problematic Cybercrimes and Cybersecurity Bill has triggered vociferous opposition from a range of civil society groups.

Over the year, this kind of contestation is likely to spread to an increasing number of countries as government efforts to gain greater control over new technologies of communication are opposed by activists determined to resist censorship and to maintain the transformative potential of social media.

To some extent, the way in which this contestation will play out will be shaped by the response of the international community. The influence of foreign governments should not be overstated – democracy cannot be built from the outside in – but in countries where the there is a delicate balance of power between the government and opposition, international pressure can sway an outcome one way or another.

While US President Barack Obama’s engagement with African issues during his time in office has been limited, under his leadership the US hardened its support for key democratic institutions such as term limits. By using America’s financial muscle and ability to directly target the financial assets of leaders inclined to disobey the rule of law, his administration generated new incentives for African governments to respect their constitutions. This was not always successful, as the number of presidents now serving a third term demonstrates, but it did strengthen the hand of opposition parties and civil society groups in some countries.

It seems unlikely that the US will remain as committed to these goals under Donald Trump. Although the new administration will probably appoint a number of old hands to manage the day-to-day business of engaging with foreign partners, there is no evidence that the president-elect is concerned about good governance beyond America’s borders, or indeed within them. Those who bemoan Western interference in African affairs will welcome this development, but it is important to keep in mind that it is likely to come at a cost.

Although European states are broadly supportive of good governance in Africa, they have neither the funding nor the sense of purpose to replace the role played by the US. Moreover, following the coordinated African attack on the International Criminal Court (ICC), many wish to avoid taking a leading role for fear of being accused of neo-colonialism. In the absence of international engagement, an increasing number of episodes of contestation are likely to be won by the government unless opposition parties and civil society groups can find new ways to outwit those in power and hold them to account.

This, then, may well turn out to be the real story of 2017: the struggle of grassroots activists and parties operating in authoritarian and semi-authoritarian contexts to prevent a further decline in the quality of political rights and civil liberties in their countries. How this story plays out is of the utmost importance for the future of democracy in Africa, because if these battles are lost it will undermine the ability of ordinary citizens to have a say on the issues that affect their own lives for years to come.