Kenyatta, Ruto, Sang and Muthaura to face trial at ICC for crimes against humanity – By Keith Somerville 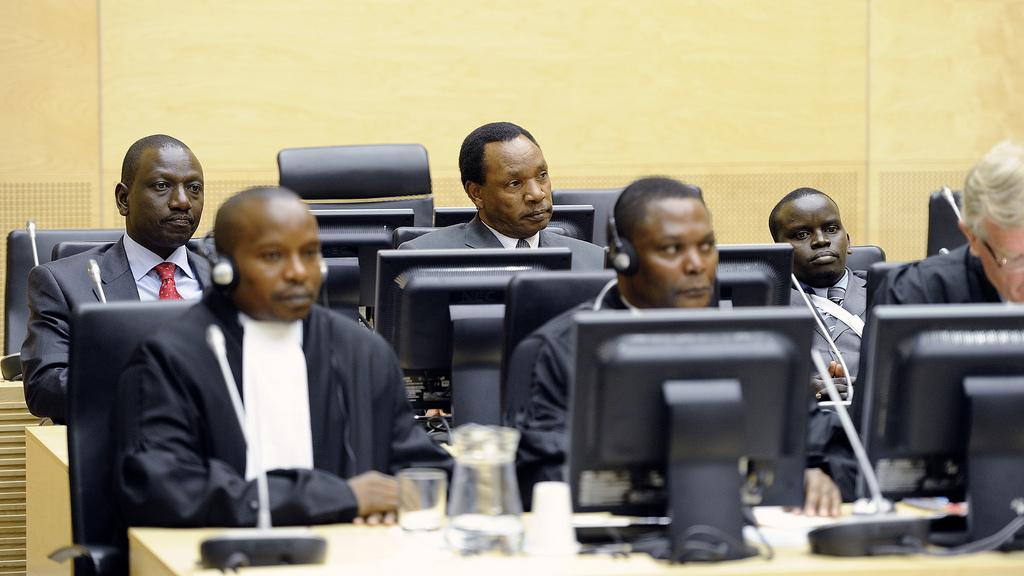 Ruto, Kosgey and arap Sang - Ruto and Sang are to stand trial in The Hague under the ICC.

Henry Kosgey and Mohammed Hussein Ali, former Chief of the Kenyan Police, were told that the evidence at the pre-trial hearings in 2011 was not sufficient to charge them.  Kenyatta, Ruto and Muthaura are all charged as indirect perpetrators of the crimes of which they are accused, while Sang is being charged as a contributor to the crimes.

The decision, announced on 23rd January at the court in The Hague, was broadcast live in Kenya via the internet.  The judge reading the court chamber’s decision, Ekaterina Trendafilova, said that the decision was a majority one and that Judge Hans-Peter Kaul had dissented, believing that the crimes committed were serious ones but that they could be prosecuted under Kenyan law and did not constitute crimes against humanity.

Those charged will now await a further announcement about the timing of the trial, which will be held in The Hague.  They are at liberty to return to Kenya but with the proviso that the court would reconsider this if those to stand trial engaged in incitement to hatred or other serious crimes.

The announcement will throw Kenyan politics into turmoil, with elections due in March 2013 (the result of a recent High Court ruling).  Kenyatta and Ruto have both said they will stand in the presidential election.  The former would be the natural successor to President Mwai Kibaki, who cannot run for a third term in office, and would be likely to harness the overwhelming support of his own Kikuyu community.  They voted en masse for Kibaki’s PNU (Party of National Unity) in December 2007.

Ruto was a key ally of Raila Odinga in 2007 and rallied the majority of votes in Kalenjin areas of the Rift Valley behind Odinga’s Orange Democratic Movement (ODM).  Ruto and Odinga have since fallen out violently, with Ruto campaigning fiercely against Odinga during the constitutional referendum in 2010 and vowing to oppose him in the presidential elections.  Talks between Ruto and Kenyatta in recent months have suggested a possible electoral alliance – the sticking point will be that only one of them could run for president if they become allies.

It remains to be seen whether the ICC decision will count them both out of the race – either through legal challenges by opponents to them standing for office while facing such serious charges, or through potential allies seeing the charges as electoral liabilities.  Kenyan politics at election time is about shifting political alliances rather than competition between established parties, with key politicians throwing their weight behind candidates according to political expediency and likely material gain from office rather than permanent community or party allegiances, let alone thoughts of policy or ideology.

The decision of the court to put Joshua arap Sang on trial is an interesting one that may have repercussions for the vernacular media network in Kenya.  While the other accused held high political or government office, Sang was the chief of operations and the most popular broadcaster at Kass FM – a Kalenjin-language radio station with a strong following in the Rift Valley and among Kalenjin communities throughout Kenya.  When originally charged, the ICC indictment included reference to his use of his “radio program to collect supporters and provide signals to members of the plan” for attacks against communities supporting the PNU.

Sang has always denied this, both before and after the ICC released its indictment.  When I interviewed him in Nairobi in February 2010 he was adamant that while his station broadcast criticism of the election results and of the PNU, it did not incite violence.  Transcript evidence of Kass’s output is thin and there are just a couple of examples when the station’s output appeared to urge attacks against others – none of them directly attributable to Sang himself (though he was the best-known and most popular of its presenters).  He admitted that phrases like “the mongoose is at the chickens” and “the people of the milk should clear the weeds from the grass” might have been broadcast, but denied that they meant Kalenjin-speakers should attack people from communities like the Kikuyu, Kamba or Kisii, which had supported Kibaki’s PNU, and drive them from the Rift Valley. He said they were popular colloquial expressions and that all his station was doing was broadcasting in a language that the audience would understand and appreciate.

Media observers in Kenya (and other Kenyan journalists) would not necessarily agree – several told me that the expressions were instructions to attack Kikuyu and others and drive them from the Rift Valley, precisely the charges against Ruto and Sang in the ICC decision.  It should be noted that other vernacular radio stations – Kameme FM and Inooro (both Gikuyu-language stations) and Lake Victoria FM (Luo) – were also accused of biased and inflammatory broadcasting during the violence.

Supporters of Kass and of Sang unsurprisingly ask why he was singled out by the ICC. That might become apparent once the trial commences, as the ICC must have more evidence than the dozen or so transcripts in the public domain, which seem too insubstantial to be the basis of such serious charges.  The charges against Sang (and Ruto) relate not only to radio broadcasts but the organization of a network of supporters to gain power in the Rift Valley Province and to “punish and expel from the Rift Valley those perceived to support the PNU”.  The indictment suggests that Joshua arap Sang was much more than a radio broadcaster.

The Hague trial will not only be of crucial importance to the elections next year, but could also have a major effect on the future of vernacular radio, if the trial were to reveal extensive hate broadcasting.   The behaviour of radio stations in 2007-8 and again during the constitutional referendum was widely criticized – some media commentators and monitors going to the unsupportable lengths of comparing their output in 2008 to Radio-Television des Mille Collines during the Rwandan genocide.

Inappropriate comparisons aside, there is clearly a problem. During the PEV and the referendum of 2010, there were broadcasts by a number of stations, including Kass, which were deemed to be inciting violence and to be a threat to peace.  Then  in June and July 2010 Kenyan National Cohesion and Integration Commission warned a number of stations about hate broadcasting during the referendum campaign.  In 2010, the chief Kenyan government press officer, Albert Mutua, told the author that successive governments had been unhappy about the role and behaviour of vernacular stations, believing them to be a danger to national unity and a source of community tensions.  It will be instructive to monitor output as the political campaigns for parliament and the presidency get underway later this year.

Keith Somerville is lecturer in the School of Politics and International relations at the University of Kent. He worked at the BBC World Service from 1988 to 2005.