Politics
Home›African Arguments›Politics›An African President of the World Bank is not the Solution, when the Bank itself is the Problem – By Desné Masie

An African President of the World Bank is not the Solution, when the Bank itself is the Problem – By Desné Masie 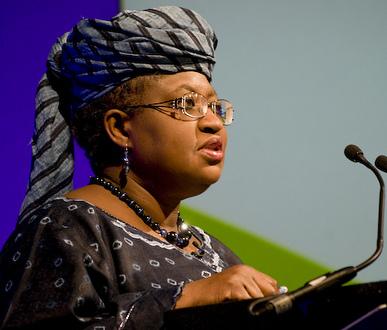 Ngozi is not the answer.

The hegemony and legitimacy of both the World Bank and International Monetary Fund is too-often nonchalantly presumed. Not only has the World Bank failed poor countries, with structural adjustment and other genteel forms of developmental quackery, but those countries have not enjoyed equal voting power around the very policies that affect them most. Yet the World Bank maintains power and prestige mostly by continuing to assert its own relevance. One of the ways it does this is through its hyped-up leadership contests.

The power we vest in the World Bank is a self-fulfilling prophecy. Its potential to sway and harm developing countries can only be limited by dissolving a belief in its right not only to dictate to emerging and cash-strapped countries, but in its very right to exist. Institutions are merely the creation of the repeated social performances of consenting actors.

That being said, having an African female president of The Bank is a nice sentiment, and as Richard Dowden himself points out, it would be a hugely symbolic appointment. This is precisely the problem. Ngozi Okonjo-Iweala’s appointment would be merely that – symbolic. But the pressing challenges of poor countries in a globalised economy cannot be solved simply with symbol and sentiment.

Moreover, having Okonjo-Iweala play the subaltern saviour of the World Bank would only serve to further justify the Bank’s odious economic policies and other transgressions against the poor. Emerging economies must recognise their complicity in the ‘Washington consensus’ that has developed within post-colonial economics and take action to change it.

There is no guarantee that with Okonjo-Iweala as figurehead, reform and fairness in the Bank’s policies would be substantive. To clamour for a World Bank president from an emerging market is a hollow exercise altogether. Though Okonjo-Iweala has done some good work with debt-relief, and is well-qualified and experienced in having spent time with the Bank (having served as its former managing director), this is part of the problem – she is a student of its present culture and rhetoric.

Nor can meaningful economic reform take place while the Bank remains intertwined with the prerogatives of the IMF, which, with the ‘symbolically appointed’ Christine Lagarde at its helm, continues to assert the European agenda in fiscal policies, and hence global macroeconomic conditions that favour a currently distressed Europe. Furthermore, the IMF is an active participant and aggravator of financial crises, and Africa, according to its current rising narrative, would do well at this stage to distance itself from this falling house of sovereign debt contagion.

Africa’s relative disembededness from these contaminated capital markets is potentially one of its greatest assets, as the consequences of Club Med’s fiscal and economic flatline remain yet unknown. Okonjo-Iweala, with her sprawling African network, would be under pressure to further influence these emerging capital markets to the demands of this contaminated hot money, already circling in.

Both the Bank and the IMF are policy relics from another time, having been formed at Bretton Woods in 1944. The Bank began its life as the “International Bank for Reconstruction and Development”. Joseph Stiglitz – an example of how the Bank treats dissenters and discontents – has pointed out that the “Development part was added almost as an afterthought” when “most countries in the developing world were still colonies, and what meagre economic development efforts would be undertaken were to be considered the responsibility of their European masters”.

Africans pushing for Okonjo-Iweala to be at the World Bank’s helm would be much like turkeys voting for Christmas.

Instead of clamouring for recognition from the World Bank, African countries would do better by systematically extricating themselves from dependency on The Bank’s money and ideas. They should concentrate on diversifying and strengthening their access to alternative competing structures for development finance, such as the African Development Bank or BRIC investments. The World Bank’s importance in this regard is anyway overstated. The Bank must be forced to compete more fairly and vigorously to extend its capital and expertise instead of insisting on punching above its weight. This is especially important in the current African economic cycle, which has seen promising growth, the benefits of which must be distributed to Africans through aggressive borrowing strategies for infrastructure, education and healthcare. Too much damage has been done to these economies in the past serving the demands of the IMF for an over-prudential approach in macroeconomic policy.

Rather than vying for leadership of this Bretton Woods relic, African capital markets need to align themselves with institutions that will actually prioritise their own needs.