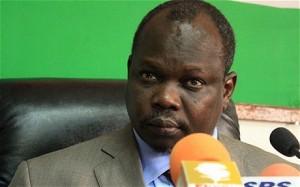 In recent weeks, antagonism between Sudan and its recently independent neighbour, South Sudan, have reached new lows. The south’s occupation of oilfields in the north, and the north’s aerial bombardment of Unity state in the south are but two reasons that neither government has managed to realise the promises of freedom, prosperity and peace in the post-secession relationship. South Sudan’s latest response to this crisis has been to dispatch its chief negotiator, Pa’gan Amum, on a whistle-stop tour of Western capital cities, to seize the international high ground and shore up support for his country’s position.

Amum, who arrived in London last week from Brussels, before moving on to the US, held a discussion meeting at Chatham House last Tuesday. He used the opportunity to present the unfolding conflict in east Africa in disconcerting and binary terms: whilst South Sudan had been “forward leaning”, the Republic of Sudan was “stuck in the past [and] bitter”. Of course, this simple tit-for-tat commentary is at odds with a far more complex set of events which has left both countries poised on a war footing. With the south shutting off oil production and the north applying a trade embargo, investors are watching with growing anxiety.

Amum’s hushed, twenty-minute speech sought to draw attention to the steps that Africa’s newest state has taken in an attempt to improve relations between the two countries. Renewed talks had recently been rejected by Khartoum, as had a financial assistance package which emerged from an agreement tabled by the African Union High Level Implementation Panel, last July. Amum argued that the reason for this repudiation was the refusal of Omar al-Bashir’s government to see South Sudan as an equal, from whom the north could accept assistance. Whilst the reasons behind the rejection of this offer may be more intricate, (revolving around border disputes, oil, and the use of proxy-fighters to topple Khartoum’s political leadership), Amum’s perspective does come in the wake of a provocative speech delivered by al-Bashir at a political rally two weeks ago, in which he described the southern leadership as “insects”.

Following separation, the quest for peace has been long and fruitless. Alex de Waal, who served as an adviser to the African Union’s High Level Implementation Panel for Sudan, has indicated that the north’s failure to integrate the residual elements of South Sudan’s army, the SPLA, into Sudan’s army in June 2011 was “a recipe for war” and a key turning point in north-south relations. Even as Amum spoke of “new relations based on respect of sovereignty and territorial integrity” at the start of the week, the evidence on the ground in Unity state was that whilst South Sudan may be hoping for peace, it is preparing for the worst. In reality, neither side can afford a protracted conflict, but it is this toxic lack of trust between the two states that has prompted the UN to intervene in a bid to break the stalemate, before war develops more ferociously.

On Tuesday, Amum ended his address by asking, “can the international community help us?” So it must be with some relief, prima facie, that the international engagement Amum sought at Chatham House appears to have been secured. Not two days after his visit to London the UN Security Council unanimously passed a resolution threatening economic and diplomatic sanctions against both parties unless discussions were resumed. The resolution, which backs the African Union road map, gives Khartoum and Juba three months to reach a compromise.

Yet whilst the significance of this measure should not be overlooked – obtaining China’s endorsement was particularly astute – the concern remains that we have been here before. The Republic of Sudan and South Sudan have previously signed non-aggression pacts that have dissipated under pressure. Although South Sudan has accepted the seven-point road map and called again for a cessation of hostilities, Sudan has said it merely agrees to the plan “in principle”. As both countries are compelled to commit themselves to the new agreement, both have alleged fresh attacks in recent days, so what will be different this time? Whilst the UN consensus may be a positive first step, South Sudan must fulfill its pledge to move out of Heglig and it is essential that the aerial campaign conducted by Sudan cease, so that international monitors can be deployed along the border while an agreement over oil and the SPLA-N can be reached.