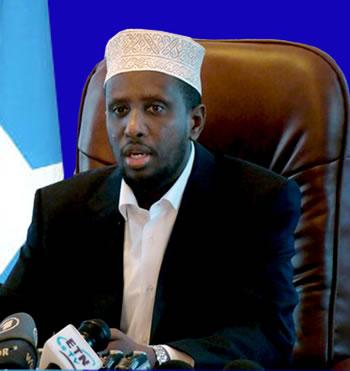 Incumbent Sheikh Sharif Sheikh Ahmed has a good chance of being re-elected as Somali President.

If it all goes according to plan, 135 clan elders who represent a convoluted power-distribution model that arbitrarily compartmentalizes Somalis into four and half clans, will select 225 members to the new parliament sometime in July. The new MPs will in turn elect a speaker and his deputies on August 4, and a president on August 20.

More than 60 men have declared their candidacy for the top job, but fewer than a handful stand a realistic chance to becoming the 8th president of the Somali Republic, since independence in 1960.

And even among the few who are considered front-runners, they’d have to meet most – if not all – of six factors that are the litmus test to becoming the president of Somalia. The factors are listed in the order of their importance.

No candidate can pull off the presidency without first securing the backing of a plurality of MPs from his sub-clan. After all, all politics is local. In Somalia the clan system is by far the most predictable indicator of political behavior. Clans support one of their own expecting a dividend once he takes reign. And in most cases, the president’s sub-clan ultimately dominates all facets of power, owing to a combination of push and pull factors. This has consistently been the case, except during the tenure of the first president, Aden Abdulle Osman, who was an idealistic leader with no ambition to retain the seat by any means. In fact, he was the first African president to step down after he was defeated in an election widely seen as fair.

Call it corruption, if you will, but money is a critical facilitator in Somali politics. The last three presidential elections (2000, 2004 & 2009) had been decided, in large part, on candidates essentially buying MPs to vote for them.

Some presidential candidates are more notorious than others, but, just as American politicians amass vast fortunes to spend on advertising, Somali candidates spend millions of dollars to grease their way into Villa Somalia (the presidential palace). None of the viable candidates is wealthy, so they’re relying on fundraising from either their clan members or external support.

Insomuch as the clan network is effective, a deep political network is also pivotal. Some candidates have cultivated political friendships beyond their base (sub-clan). And they could tap into the goodwill of those friends, or sometimes exchange their vote for posts in the future government. Some candidates are running on the platform of a clan-blind political party, though their clout is prohibitively limited. Candidates who have held positions within the civil society, business and Islamist groups have an advantage in this factor.

The last three presidents of Somalia were elected with significant external support, typically a neighbouring country. In 2000, Djibouti, which hosted the Arta Conference, lobbied for Abdulqasim Salad Hassan, and had him elected. In 2004, Ethiopia openly campaigned for Col Abdullahi Yusuf, using its vast network within the erstwhile warlords. He won decisively. And in 2009, Djibouti and some Arab nations (namely Sudan) supported Sheikh Sharif, both materially and morally. He won.

A number of the current candidates are said to have received the backing of neighbouring countries or international organizations, such as the victorious Muslim Brotherhood, whose candidates have recently won elections in Egypt, Tunisia, Morocco, among others.

It’s politics 101: before one becomes the president of Somalia, most Somalis must be able to instantly recognize your name. Even though only 225 MPs are ultimately electing the president, national name-recognition gives the candidate the sense of formidability needed to get political traction. The vast majority of the current candidates for the presidency are unbeknown beyond the political elite, or the diaspora locality from which they have recently flown in. A majority of the candidates are actually dual citizens who have spent most of the last 20 years of civil war in Western Europe, North America or Australia.

6. A presence in Somalia

This is the most benign and easily dismissed of the six factors. But no ‘parachuted’ candidate will win the presidency this time around. Unfortunately, the overwhelming majority of the candidates are perennial opportunists who are habitually absent from the country and only appear during presidential elections. The most serious candidates are the ones who have maintained a presence in Somalia either by holding a national position, being a prominent civil society member, or running a business in the country.

Notwithstanding these six factors, the process of selecting MPs – and by extension the speaker and the president – is inherently unfair. The process gives the incumbents a potentially insurmountable edge. They are among six politicians crowned by the international community as the “˜Signatories of the Roadmap’ – a UN-devised blueprint to end the transition for Somalia. The signatories were given the undue advantage of manipulating the process of selecting clan elders who are responsible for selecting MPs. As a result, it is widely accepted that the elders will select MPs with deep ties to the incumbents.

Still, this election cycle sparked a vibrant yet civic competition for the top job. That is a quantum leap from just a few years ago, when the men with the biggest guns were the most handsomely rewarded politically. This time around, nascent political parties have been formed, and a national political discourse is taking root. Most optimistically, the archaic, clannish way of seeking the presidency, while still omnipresent, is beginning to lose momentum.

The next election, just five short years away, will hopefully be a lot more vibrant and far less clan-oriented.