Kenya’s under fire journalists refuse to be cowed

But the same cannot necessarily be said of Kenya’s media houses. 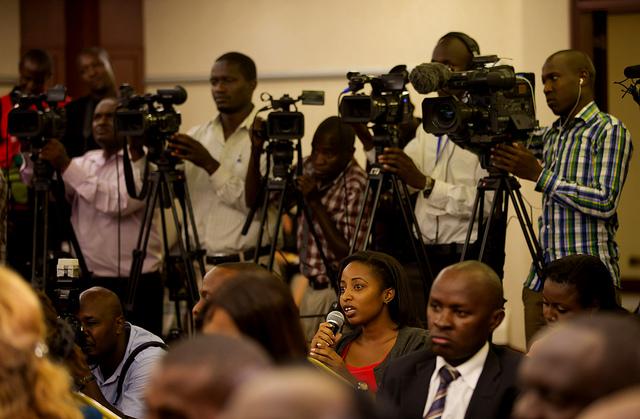 Kenya has a proud history of a vibrant media environment, but many feel this is being eroded. Credit: IMF Photograph/Stephen Jaffe.

On the evening of 23 January, Yassin Juma, a freelance journalist and blogger, was at home with his family when he received an unexpected call. 13 police officers burst into his home, arresting the soft-spoken reporter and searching his premises. They “ransacked everywhere as the children cried”, recalls Juma, who was held overnight before being released.

In the lead up to his arrest, the journalist had been exploring claims that the Kenya Defence Forces were warned ahead of last month’s attack in El-Adde, Somalia, a bloody assault in which dozens of Kenyan soldiers are believed to have been killed by al-Shabaab militants. Juma heard from someone who claimed he had shared information with the National Intelligence Service and Interior Ministry before the attack. The journalist pursued the lead, but as soon as he did, was immediately warned his activities were being monitored.

“The first time I contacted [the source], a friend in the police tipped me off that my phone was being tracked,” says Juma.

The journalist continued his investigation nonetheless, posting updates from his research on social media. But just days before his full story was scheduled to run, he was arrested on charges of “improper use of a licensed telecommunications gadget”. The article is still yet to go live.

“Despite the fact that I was later released without being charged, the story did not run,” says Juma. “As such, Kenyans have been left in the dark on what this intelligence shared was really all about.”

Juma’s story of arrest is far from unique in Kenya today. In fact, according to Article 19, an NGO that focuses on freedom of information, “intimidation and harassment of bloggers” has reached a “new high” with several individuals arrested in January alone. And like Juma, many of those targeted have been accused of the same vague “Section 29” charge of “improper use of a licensed telecommunication gadget”. This has led to arrests based on a wide range of allegations.

Judith Akolo of KBC, for example, was questioned by the Directorate of Criminal Investigations (DCI) after she retweeted a comment about a DCI job advert. Journalist Elijah Kinyanjui faced the same charge after sharing a photo of a governor’s daughter on social media that showed her in a bad light. Meanwhile, on 26 January, the Directorate of Criminal Investigations summoned 10 bloggers – all of whom have been critical of the government – on that same loose charge.

This flurry of arrests and interrogations has been heavily criticised by journalists and activists who accuse the government of trying to clamp down on freedom of speech with the goal of creating a single state-approved story. “These journalists just seek to question issues so as to hold power to account,” says Henry Maina, Article 19’s Regional Director for Eastern Africa, but any “counter-narrative is seen unprofessional, unpatriotic and criminal”.

However, the government refutes these criticisms, insisting that it is not in any way trying to intimidate journalists. Interior Cabinet Secretary Joseph Nkaissery told African Arguments that the state respects independent media and freedom of expression, though added that this “freedom must be enjoyed in a responsible manner”.

According to some activists, Kenyan journalism is currently in a tough spot and is not only under direct fire by threat of arrest, but also under indirect pressure via their own editors and media houses. Many news organisations are reliant on government advertising for much of their revenue, and critics say this state of affairs influences editors’ decisions.

Last month, for instance, Nation Media Group fired its Managing Editor for Special Projects Denis Galava after he published an editorial that was highly critical of President Uhuru Kenyatta. The Group said the reason behind the sacking was Galava’s failure to follow procedure and that it had nothing to do with the content of the piece, though the explanation also said that Galava was fired for “endangering the group’s business”. Galava says he had published many editorials without oversight previously and many observers believe the Group felt pressured by the government.

In a similar case in 2014, The Standard also fired its Editorial Director, Chaacha Mwita, after the paper published a piece criticising government excesses; sources within the newspaper suggest State House had influenced the media house’s decision. And at the end of 2015, John Allan Namu, one of Kenya’s most celebrated investigative journalists, resigned from KTN saying the show’s management were refusing to fund his investigations into powerful individuals.

“By using the revenue method to put the media into shape, journalists’ freedom is all but eroded,” says the Eric Oduor, Secretary-General of the Kenya Union of Journalists. “The regime has been uncomfortable with some journalists considered unpatriotic for writing or broadcasting what a right thinking person considers the truth. It is ever working towards ensuring that it suppresses media freedom.”

Namu agrees that the government pressures news organisations to silence critical journalists, whether directly or indirectly, but the award-winning journalist suggests that media houses also need to take responsibility for having dug their own grave. “They are deeply corrupt, are reluctant to do the right thing, and favouritism is common in newsrooms,” he says. “We are the architects of our own doom.”

The recently fired Galava also laments the erosion of quality management in Kenya’s news organisations. “Nation Media Group used to have a strong editorial team. Its former chief executive Linus Gitahi, Editorial Directors Wangethi Mwangi and Joe Odindo never abandoned their editors and reporters. However, the current leadership is made up of bosses who just throw their journalists under the bus for political expedience,” he says.

Mohammed Ali, a senior investigative editor at KTN, adds: “Some [editors] have even betrayed the profession by leaking the sensitive stories we pitch to them to the government…I have been threatened with death, I have been told to stop pursuing certain storylines and in some instances, I have taken refuge out of the country for fear of my life.”

Mightier than the sword

Kenya has a proud history of having a relatively free and independent media, but over the past few years journalists have been growing increasingly worried about state interference and the deterioration of journalistic integrity. According to the Union of Journalists’ Oduor, the government’s censorship has been “well-coordinated” and began in 2013 with the passing of the controversial Information and Communications (Amendment) Bill.

Since then, the situation has declined significantly and many believe things will only get worse as the 2017 elections approach. However, although many in Kenya are concerned about the ability of news organisations to hold those in power accountable, it seems clear that certain journalists will continue to work tirelessly regardless of the environment. The likes of Namu have set up their own independent investigative outfits, while others refuse to be intimidated and vow to find ways to continue their work.

“I fear not this regime that seems committed to silencing dissident voices in the media,” says KTN’s Ali. “I will keep speaking for the public who are downtrodden.”

Meanwhile, Juma says that his detention last month has not deterred him but spurred him on. “This recent arrest will not stop my pen from doing its work,” he says. “Its ink will flow even faster.”

Mark Kapchanga is a freelance journalist.