Wangari Maathai was not a good woman. Kenya needs more of them.

That Kenya still doesn’t know what to do with the legacy of Wangari Maathai says more about a country at war with itself than it does about the activist hero. 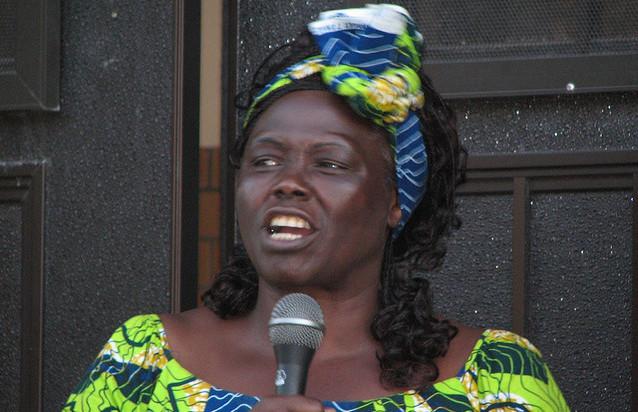 25 September marked four years since the passing of Kenyan environmentalist and feminist icon, Wangari Maathai. Around the world, the anniversary was marked by speeches, tree planting ceremonies and any number of other events that resonated with Maathai’s legacy as a feminist, an environmentalist and one of the foremost leaders of the post-Cold War democracy movement.

In Kenya, however, the celebrations were notably muted – a handful of disjointed events by various individuals. A few days after the anniversary, the city council quietly announced that it was naming a road after Maathai to which many reacted with a figurative shrug. There was a poorly attended family fun day at the Karura Forest that Maathai sought to protect, and even though the event was free, few turned up. There wasn’t even a hint of recognition at the highest levels of government.

Yet this is Professor Wangari Maathai. The first African woman to win the Nobel Peace Prize. The first Kenyan woman to earn a doctoral degree. An icon of Kenya’s democratic movement who repeatedly put not just her mind but also her body on the line in order to secure a better future for Kenyans and their natural environment.

Maathai was a consistent thorn in the side of the autocratic administration of Daniel arap Moi which lasted over two decades up to 2002, and she revolutionised the act of protest in Kenya by centring it on the female body. In urging the protesting mothers of detainees to strip when threatened by security officers who were threatening to break up their protests, Maathai wove traditional beliefs on nudity and gender together with contemporary political struggles to foment a decisive moment in the struggle that brought women into the centre of a political discourse in which they had only previously been included peripherally. She was an intellectual and an activist who ultimately did more to spur on the democratic movement in Kenya than nearly anyone else.

It’s not that Maathai doesn’t have some kind of standing in Kenya. Most people recognise that she accomplished something. Her name will roll off the tongue if one is pushed to identify iconic women in the country. She stood up to the Moi administration and seemingly won at a time when most Kenyans believed it simply could not be done. Most Kenyans get that this is important.

But Maathai’s standing in Kenya is definitely ambiguous. She is beloved by feminists and environmentalists, and tolerated by everyone else, a fact that underscores the culture wars that pervade the Kenyan public sphere. The collision between traditions –  mainly codified and preserved by outsiders through a stagnant colonial education and a pick-and-choose aspirational modernity that sees the value in keeping some traditions as long as they benefit power – has created many problems, particularly for women. Women are expected to look backwards on guidance on what it means to be “good” – where “good” is primarily defined by men – but not too good because that makes women less interesting to men.

The Madonna/Whore paradox is prevalent, and to navigate it many women live a Janus-faced existence that hides elements of their sexuality, their ambition or their personality from the male gaze. They are forced to pretend to be “good” to satisfy societal expectation and navigate the relatively small social and political space that remains.

But this was not Wangari Maathai. Maathai was brash and unapologetic. Her PhD was one thing, but she also divorced her husband at a time when divorce was still a major taboo and was roundly and publicly attacked for it. She insisted on leading from the front, rather than spectating while men battled for the soul of the country.

Because private morality is still so determinative of public standing, especially for women, most Kenyans still don’t know what to do with Maathai’s legacy. Kenya loves “good women”, but Maathai was not a “good woman”. Rather, she was an embodiment of the modern proverb “good women seldom make history”.

Even in death, Maathai’s legacy pays the price for this. For instance, every few months, Kenyan social media is seized by a paroxysm of misguided Moi nostalgia while by contrast Maathai’s anniversary barely registered. Parts of the forest she fought to save have been cleared for diplomatic missions and contested commercial development. Although she rose to the rank of Minister under the 2002 administration of Mwai Kibaki, she roundly lost in local elections in Tetu constituency in 2007 – a mere three years after she had won the Nobel Prize.

If an alien landed in Kenya this week they’d think Moi was a hero and Maathai a mere footnote in national history.

Maathai’s legacy is a victim of both the casual misogyny and the political schizophrenia that characterises Kenya’s public sphere. Like all other female politicians, when substantive policy critiques failed, her private life was laid bare for public consumption, particularly during her divorce. These stories would be replayed everywhere throughout her political career as a cautionary tale for women choosing to enter into politics – a reminder that only those with near virginal moral standing should be considered eligible to venture into mainstream politics. In Kenya, we want women to be strong and opinionated, but not too strong and not too opinionated – not like Maathai.

Kenyan politics will hold up women as emblems but denies them full participation in the highest levels of government, instead publicly referring to female politicians as “flower girls” and creating a political ghetto in the women’s representative positions that effectively wrote women out of mainstream politics. Maathai wanted to be more than an emblem, and Kenya still doesn’t know what to do with that.

Those who love her – primarily similarly insubordinate women who recognise the suffocating restrictiveness of the country’s political misogyny – do so passionately. Meanwhile, those who dislike her go beyond badmouthing her legacy to ignoring it completely, slowly and systematically writing her out of the democracy movement even though arguably it was her Mother’s Protest that set off the active phase of the pro-democracy demonstrations. Consequently, an entire generation is growing up that, worse than not liking Maathai, simply doesn’t know her.

Casual misogyny in the public sphere in Kenya can reach mind-boggling levels. We live in a time in which an MP is caught near red-handed in the act of rape and the country’s most popular comedian responds by questioning why she was with him. In which the president responds to the brutal sexual assault of a 4-year-old girl by her uncle and his friend by asking “where was her mother?” In which a national television station warns women who study beyond undergraduate level that they will never find a husband. In which women seen as being “indecently dressed” are violently stripped on the streets, with the vocal support of prominent public figures.

The situation in Kenya is such that US President Barack Obama can give a speech at the Kasarani National Stadium, observing at one point that “you cannot get ahead if half of your team isn’t playing”, and a journalist with a full spread in the most popular newspaper can say “I agree with everything Obama said, except that thing about women”. We live in a society in which silence around violence against girls and women is pervasive – 25% of women in all age groups have endured some kind of sexual and physical violence – and yet the first question victims of violence are asked is “what did you do to bring this upon yourself?”

Maathai’s legacy wrote against this toxic narrative. She was imperfect but somehow more effective for that fact, as she marshalled her imperfections as if to say “if I can do it, so can you”. She did more to give Kenyan women space to simply be themselves in the context of this casual misogyny and political schizophrenia than any woman of her generation merely by refusing to be a “good girl”.

That Kenya still doesn’t know what to do with this legacy says more about the country than it does about Wangari Maathai – a testament to a nation deeply at war with itself over what to do about women who refuse to be “good”.

If you enjoyed this, you may also enjoy: