With a cluster of hotly-contested election re-runs coming up and low oil prices squeezing budgets, the next six months will be pivotal for the Nigerian government. 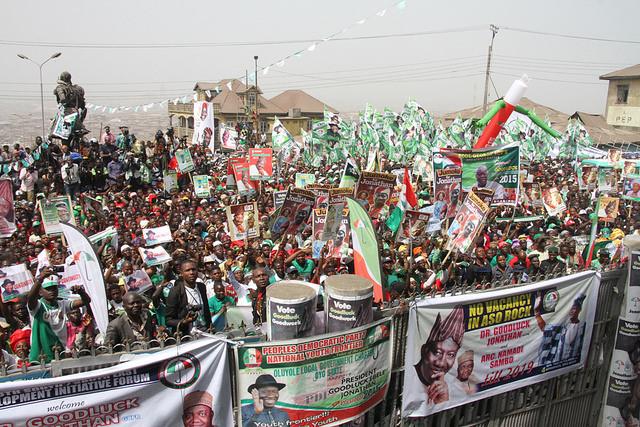 There are few moments in which being the president of Nigeria is easy, but over the next six months, Muhammadu Buhari is likely to face some of his toughest tests yet. How his administration deals with these issues could define the government’s relationship with the country over the next four years.

The two major challenges coming to a head in the near future are clear to see. On the economic front, low oil prices are squeezing the government budget and undermining the country’s economic prospects. Meanwhile, on the political front, tensions in the Niger Delta and South East continue to simmer as the local economy continues to contract and could heat up further as election re-runs are held over the next few months.

What is less clear, however, is how far these two matters could interact with one another to produce an even more troubling mix.

The most imminent hurdles facing Nigeria are the elections that need to be re-held after a significant cluster of results from April 2015 were annulled. These polls – most of which are in the south of the country – are required to be repeated in the coming months after the original elections were deemed to be fraught with irregularities and violence. Given how much there is at stake, serious divisions could arise once again, and the presence of militant groups that have been dormant since 2009 could be a significant factor.

Re-run polls completed just this month in Bayelsa, a state in the Niger Delta, point to these risks. In these recent elections, ‘former’ militants openly took sides and became enforcers for the two major parties in what became a violent contest – the number of fatalities is still being debated. The political tension was such that members of the All Progressives Congress (APC) on one side and the Peoples Democratic Party (PDP) on the other both routinely lobbed accusations of bias at the security services and electoral commission.

The process of setting the remaining polls is still somewhat unpredictable. For instance, earlier this week the Supreme Court made a surprise verdict as it overruled successive lower court judgements and decided to uphold the original outcome of the Rivers state contest, restoring the PDP’s Nyesom Wike as governor. However, for many of the election re-runs, the need for a redo has been locked in with National Assembly and State Assembly elections to be conducted in February and March, and sensitive governorship polls likely to fall in June.

Many of these will be closely fought, but a few that will present particular challenges include: the two Senate races in Abia state, which is presently the site of many of the agitations calling for independence for Biafra; the possible re-run of the governorship election in the oil-rich southern state of Akwa Ibom; and the national assembly polls in which the PDP former Senate President David Mark faces an intense contest in Benue South.

Most of these elections are being framed as a test for the newly-inaugurated Electoral Commission (INEC), which has already been criticised over its conduct of elections in Kogi and Bayelsa. But the polls will also be a serious test of credibility for federal and state governments as well as security services amidst a rising sense of insecurity.

If these challenges were not enough, they are also happening in the context of significant economic travails. Low oil prices are cutting away at government budgets; the Central Bank of Nigeria recently announced that non-oil revenues fell from $10.5 billion in 2014 to $4.4 billion in 2015; and personal interviews with oil executives suggest they are looking to cut their staff budgets in half, whether by making large-scale redundancies or slashing salaries.

These economic impacts are not unrelated to the discontentment in the Niger Delta and the growing calls for Biafran independence. While tagged as a ‘south east’ movement, recent protests around the issue of Biafra have highlighted a capacity to bring out crowds across the Niger Delta and even as far afield as Lagos.

The protests are particularly worrying because their central driving force at present is Radio Biafra (broadcast from the UK), which has a virulently anti-northern message. However, a common theme of the movement seems to be the pool of frustrated youth who have seen their economic opportunities, which were slender to begin with, evaporate more recently.

Indeed, the channelling of development and patronage funds to the Niger Delta have contracted at a pace every bit as breath-taking as the collapse in oil prices. Federal allocations to state governments in the region are down by more than 50% in some cases, while agencies such as the Niger Delta Development Commission (NDDC) are facing a budget cut of around 75%. This is part of a picture that is reflected nationally, but the scale of the drop in the delta states is also magnified by certain ‘multipliers’, such as the fact that the oil industry employers currently shedding jobs are also by far the biggest taxpayers.

Added to these worrying trends, the region has also experienced some other more exceptional economic hits. For example, the Federal Government now appears intent on cancelling the building of a new maritime university, a plan conceived by the previous administration. It had been budgeted to cost some $340 million and was to be located in the home town of Government Tompolo, a prominent ‘ex-militant’ who is now facing charges of corruption. The day after charges were filed against Tompolo, two major oil pipelines were blown up and other facilities were attacked amidst claims and counter claims over precisely who was responsible.

This brew of challenges facing Nigeria is extraordinarily complicated, but some of these tests can also be seen as opportunities.

For example, if INEC and the security services are able to conduct fair elections in difficult states, the effects could be significant. Better governance remains at the core of improving prospects in the Niger Delta and this cannot be achieved without polls that see increased participation from rural communities and middle-classes. This latter group has typically had little confidence in the elections and tended to stay away from them. Although there is not long to go before elections, exceeding the public’s low expectations could set local democratisation on a more positive trajectory.

In a broader sense, the current situation is also a crucial moment for the Federal Government to communicate that it is not abandoning the mission of development in the Niger Delta. Promising public commitments have been made on items such as oil spill clean-ups in high-profile areas such as Ogoni. But amidst cutbacks and clampdowns, it is important that these words are converted into action.

Some of the quickest interventions will likely need to come down established channels. This means the recent appointment of a new Managing Director at the Niger Delta Development Commission (NDDC) will come under additional spotlight. In her first few weeks, the new MD has highlighted better governance, transparency, and engagement with civil society as being crucial to turning around an institution notorious for patronage and corruption. With few other ready levers, the NDDC’s conduct will be vital to how the Federal Government engages with the region and it is now time for the NNDC to put its money where its mouth is.

Last year, Nigeria navigated a difficult crossroads in the 2015 elections. In the first six months of this year, the country is at another such crossroads, this time centred on the Niger Delta and South East. The path Buhari takes will affect the whole country and could define the rest of his term.

Chris Newsom is an analyst based in Nigeria and a programmes advisor to Stakeholder Democracy Network (SDN).