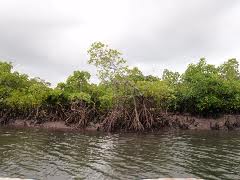 East Africa's mangrove swamps are just one aspect of a fragile coastal ecosystem under threat from development of the oil and natural gas industry.

East Africa is about to experience a hydrocarbon induced economic boom. However, the disconnect between what oil and petrol companies say is happening regarding the development of oil and gas resources, versus what international NGOs, academics and ecologists say is occurring is alarming. What is clear is that we have already done a great deal of damage, and appear to have learnt little.

Natural gas exploration in East Africa is being pursued without adequate scientific studies of vulnerable marine environments, including the 220 “˜red list’ species under threat located in the vast coastal and inland areas,  and the newly discovered species of deep water marine life living in hydrothermal vents in the Indian ocean.

In Tanzania and Kenya the environmental management studies associated with the LAPSETT pipeline, the Mwambani port in Tanga Marine Park, and Lake Natron have largely been ignored.

Eighteen companies are involved in the 27 offshore coastal areas, in South Kenya, South Tanzania, and North Mozambique. The companies include: British Gas Group, Statoil (which is a 40 percent shareholder of Exxon) Royal Dutch Shell, Anadarko, Petrobras, Ophir, Origin Oil, Total, BP and Aminex.  With only 500 oil wells drilled so far (compared to West and North Africa’s 35,000), the estimated volume of the gas reserves alone are 100 trillion cubic feet.  Petroleum reserves are estimated at 600,000 barrels a day.

Off the record, several consultants involved in the oil and gas industry are willing to offer their opinions. All are aware that the oil industry is a serious player: $US 2.1 trillion is needed for investment in African oil and gas supply infrastructure to build refineries, roads, whole towns and ports between 2010-2035.

Consultants are contractually bound not to talk about what they are doing, and scared to “˜bite the hand that feeds them.’ As one said “…what we do know is that most of East Africa has no regulatory frameworks in place for oil and mineral resources exploitation. Or if they have, there is an abject lack of willpower to implement them. Selous in Tanzania, the Albertine Rift and  Murchison Falls National Park in Uganda and Virunga National Park in Rwanda have all had Environmental  Assessments or management plans which have not been adhered to or implemented. They sit on shelves, unread.”

Certainly in Mtwara, Mikindani and Kilwa (Southern Tanzania, close to the border of Mozambique) there are enough problems already without adding the massive uncertainties and risks that oil and gas exploration bring.

Firstly, environmental assessments are not in the public domain. Secondly the area is wracked with existing agricultural and water scarcity issues. Thirdly, unemployment and livelihoods are in a mess: the coastal fishing communities dynamite up to four times an hour in Mtwara bay, and the oil platform is being drilled right next door to a marine park, famous for sea horses and turtles. As Professor Marc Kochzius of Brussels University comments, “Compromising this natural capital of living resources by uncontrolled oil and gas exploitation that damages or destroys these ecosystems will have undesired and severe socio-economic consequences. If coastal habitats can no longer support subsistence fisheries, a large part of the coastal population will lose their main source of animal protein, since fishing is the only possibility for poor people to meet their requirements”.

Inland, in Uganda three British firms, Tullow, Tower and Dominion are all exploring the Albertine Rift, a lake area in which 2- 2.5 billion barrels of oil have already been discovered.  In Mozambique, Uganda and Tanzania, oil and natural gas drilling will take place in national parks and UN World Heritage Sites. The governments are the first to privately admit that they can’t effectively manage the burgeoning development pressures. Dr Dembe, a senior Tanzanian National Parks Association official, says: “These challenges, between wildlife, resources and extraction are extremely challenging, they are not simple problems, adding resource extraction into this complicates it all, and yes, I am worried we do not have the capacity, the leadership, and the politicians to do this properly.”

Every oil company working in Tanzania has to donate $100,000 (US) a year, as a basic registration fee to central government.  And, as a result of the lessons learned in gold mining, the Tanzanian government is asking for 60 percent of all gas revenues. However, financial mechanisms in East Africa to keep account of the revenues are deliberately vague: only companies registered with the Securities and Exchange Commission (in the USA) are required to submit financial reports – which leaves the Italian, Brazilian and British firms exempt.  Even then, it is easy, as has already happened in Uganda, for local ministers and judges to ensure disclosure of documents relating to oil are kept out of the public sphere.

The Tanzanian minister for  Energy and Minerals, Mr William Ngeleja, said Petrobras, Motherland Industries and  Heritage Rukwa from Brazil, India and the UK, respectively “‘ would prospect for gas and oil  reserves in the country for 11 years. In his, and every other government press release in East African media, there is no mention of  issues alarming  World Wildlife Fund East Africa, and IUCN: the threatened stature of seagrass, coastal mangroves,  dogon, Coelecanthes, sea turtles, the manta, the pristine areas of coral, which range over thousands of miles along this East African coastline. The World Resources Institute, UN Heritage and IUCN highlight this area as some of the most complex, and fascinating marine systems in the world.

As Professor Marc Kochzius says, “Protecting coastal habitats, such as coral reefs, seagrasses, and mangroves is a vital interest of East African nations, because these habitats support the livelihood of local communities. The resulting socio-economic costs for the East African nations might exceed the benefit gained from this oil and gas exploitation.”

Are we in East Africa suffering a form of amnesia?  The fallacy of sustainable fossil fuels and the overconsumption of oil goes largely unquestioned, particularly by East African media and electorates. As veteran Nigerian activist, Nnimmo Bassey comments: “I’m sure there are communities in Tanzania and Kenya that have swallowed the tales from the oil industry and the government. That was the situation in Nigeria 54 years ago, in Uganda, in Ghana.  Now we know better. Most communities are already seeing the bare fangs of the industry. Fossil fuel civilization has reached its dead end. Anything further just means going over the precipice.”

Comparisons with the Niger Delta situation are complicated by the presence of illegal oil wells (“˜bunkering’), exploitation of existing ethnic hatreds by interested parties, spurious factual data (often gathered with specific agendas in mind), and the corruption which dominated the country prior to 1999.

The use of flaring, and the failure to follow up on the two major oil spills in August and December 2008 in the Niger Delta (where the volume of oil spill was as large as the volume of oil spilt by the Exxon Valdez oil tanker in Alaska in 1989) has left Bassey angry: “[The] Exxon Valdez accident is considered as one of the worst environmental disasters of all time. Why has the environmental disaster in the Niger Delta never reached the same level of relevance? The deafening silence over this level of ecological assault makes some of us reach the conclusion that human and environmental rights are only important when abridged in rich, powerful countries. No questions asked. It is a replay of the abuses entrenched from colonial past, the ugly face of imperialism”.

East Africans are owed more intelligent options than just fossil fuel based modernisation plans. Oil and natural gas exploration must only continue if scientifically tight, historically informed and contextually accurate environmental and social factors are included and- crucially- made public. We need to know more about soils, water tables, erosion and to ensure communities who “˜own’ or rely on valuable environmental assets take ownership of them.

Fragmented, inaccurate and obscure information about the environment needs to be actively reworked and explained to East Africa’s citizens. If we are serious about the Millenium Development Goals, then we need to thread them into some of the core issues of Africa’s development: and that is oil and gas exploration.