Economic Growth in South Africa: has the ANC got it wrong? – By Moeletsi Mbeki and Refiloe Morwe 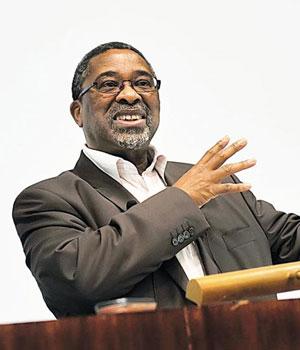 Moeletsi Mbeki believes the ANC must make a number of policy and political changes in order for South Africa to reach its economic potential.

A couple of years ago when still a political analyst for Nedbank, one of South Africa’s leading banks, I was asked by a fund manager in Edinburgh how sustainable I thought South Africa was. He asked how deep the South African mining industry intended to dig in its search for precious minerals such as gold and platinum?  He went further and asked if there was a casualty rate amongst miners that the mining industry, and the people of South Africa, was prepared to live with in the pursuit of deeper and deeper mineral deposits?

As I could not answer the Scotsman’s questions I promised to refer them to the people concerned when I got back home. I hope the Scotsman got his answer during the August/September 2012 events at Lonmin’s Marikana platinum mine where the police shot to death 34 striking miners and wounded 78 others. The ANC government demonstrated to the whole world that it is prepared to use all necessary force to keep South Africa’s ever deepening mines in operation.  Will this make South Africa, which depends on mining for over 60 percent of its exports, sustainable?  Judge for yourself.

The problem of instability in South Africa is that there was change of the political system in the early 1990s without change to the underlining economic structure.  What made this possible was because the main drivers of the political change process besides the ANC and the National Party were the governments of the United States, the United Kingdom, and the Soviet Union.  These drivers were concerned primarily with protecting their economic interests.

The outcome of these negotiations was essentially to separate the controllers of the state – the new black political elite – from the controllers of society’s productive assets, the capitalists.  This separation has created an underlining uncertainty in the South African economy as the owners of capital feel that their assets are threatened with seizure, onerous taxation and corruption by the political elite.

During the last 20 years we have therefore witnessed two major apparently contradictory social and economic trends in South Africa.

The rise to power of a new black political elite and the rapid growth of the black middle class; and the enrichment of their members through Black Economic Empowerment and highly paid state employment.

The second is the extensive de-industrialisation of South Africa, which has led to massive loss of jobs in agriculture, mining and above all in manufacturing.  The shrinkage of the productive sector has been accompanied by the growth of service sector especially finance, real estate, government, transport, communication and distribution.

Many people look at South Africa’s triple problem of extensive poverty, unemployment and inequality and conclude that a sustained dose of high economic growth rates would solve our country’s problem.  Actually that is a wrong diagnosis.

South Africa is an old country, or more accurately an old society, but one with a new political system.  It is this that makes South Africa such an explosive cocktail.  The country has entrenched social groups or interest groups if you wish, with more than a century’s ways of doing things.  The new political system on the other hand expects them to do things differently, but the political system does not have enough power to enforce the new ways prescribed by the new paradigm.  It is this unfulfilled challenge that is at the bottom of endemic conflict at the mines; at the black townships; in the commercial farms.

South Africa’s class structure has been formed by the combination of a colonial legacy and the discriminatory policies of Afrikaner rule which culminated in Apartheid.  The country’s society can be categorised as follows: there are the former ruling elite who own the country’s means of production in the form of capital and productive assets.  There are the fairly new political elite who have political power but have limited, if any access to the country’s productive assets.  The third major category of South African society is that of the African poor who have the power to provide a voting majority but have no access to any productive assets.

What this social structure has resulted in is entrenched inequality in our current society both in income and the ownership of productive assets. Capital, for the most part, remains under the control of a non-black elite, while the only means of production that the majority of the population have control over is labour.  However this is redundant for the most part because the economy is unable to absorb the type of labour that they most widely possess, namely low-skilled labour.

The country’s current leadership however is making few inroads towards addressing this underlying social structure and the subsequent problems that arise from it namely: inequality, mass poverty and unemployment. There are a number of reasons that the ANC government is failing to address these challenges.  Part of the reason lies in the fact that the ruling party has only political power and has very little control over the use or investment of productive assets.  Any suggestions of radical change that may result in the redistribution of these assets and the owners of the assets can simply invest them elsewhere. The current government is therefore to some extent controlled by those who own productive assets.

Balancing the needs of these two segments of society, while pursuing a developmental agenda, is undoubtedly challenging and requires capable and effective governance.  However, the ANC government’s policies today are a reflection of (rather than a solution to) the problems that economy and country face. The emphasis of economic policies is job-creation while this has its merits, they do not adequately address the causes of unemployment.  South Africa has a structural unemployment issue and the country’s education system is failing to respond to the problem. Numerous policies have been drafted and passed with limited efficacy at best.

In this regard it is often said that South Africa does not have a problem in terms of policy formulation and development but rather that the challenge lies in the implementation of these policies. This however is a flawed statement, in that an effective policy development process must take implementation into account. It must present practicable measures that will ensure the success of the policy. A significant contributor to this inadequacy in policy development is in the pronounced lack of technical capacity, both in the ruling party and government departments, to conduct the rigorous technical analysis required to produce effective and implementable policies.

This is particularly concerning because the state’s inability to create new jobs through economic reforms and growth, has resulted in its use of the only tool at its disposal to create employment – the state itself. As a result, the state has grown and continues to grow significantly, and has consistently been the biggest employer in country in every quarter of this year for instance.  This further exacerbates the inadequacies of the state’s employees at addressing the challenges faced by the country.

This lack of capacity permeates all the levels of government partly due to the phenomenon of “cadre deployment” in which party representatives of the ANC are deployed to government positions, often without the requisite skills to effectively execute the responsibilities associated with those positions. This phenomenon is most retrogressive at the local government and more specifically municipal level as this is the coal-face of policy implementation and subsequently service delivery. The reality is that poor governance; inefficiency and maladministration are most prevalent at this level of government, evidenced by local government departments in at least three provinces being placed under administration in the recent past.

The result is a blockage to economic and social development. What remains to be seen is how long South African society, particularly the poor voting majority will be willing to tolerate these costs to their welfare and voice their discontent by either voting for a different political party or resorting to violent protests similar to those seen in Marikana at Lonmin mine.

This raises a critical issue that the ANC battles to grasp – the separation of the party from the state.  There has been, and increasingly continues to be, a blurry line between the ANC and the national government. It is not uncommon to hear high-ranking ANC officials speak rather loosely of a “we” when posed with questions regarding the governance of the country.  This “we” includes both the ANC and the national government which is inherently incorrect. These are clearly two separate things. The national government has been in existence since 1910 while the ANC has been a ruling party only since 1994, making it abundantly clear that there is a separation between the political party and the state.  However this separation does not seem to register within the party and its members.  Further, it is not unusual for national governance to be overshadowed by party politics as is evidenced by the numerous cabinet re-shuffles that the country has been subjected to since 2007.

This absence of separation appears to have filtered through to individuals who fail to separate themselves and their affairs from the office(s) that they hold, creating the perfect environment for rampant maladministration. Also, the current government has managed to create, particularly in the recent past, a reputation for conspicuous consumption. This is of concern for two reasons. Firstly, this consumption is not funded by profits from the use of productive assets, but rather from the funds of state employment, or state coffers. Secondly, because this consumption further entrenches the inequalities between the different segments of society and intensifies the divisions within our society which manifest in the form of social unrest.

In conclusion, it is evident that South Africa is a country of great potential both for economic and social development. The country is one of the most sophisticated and promising emerging markets globally. It is also the economic powerhouse of the African continent, with a Gross Domestic Product (GDP) of R2.3 trillion (US$309bn) – four times that of its Southern African neighbours, and comprising 30 percent of the entire GDP of Africa. However, it is apparent that the country will not reach its full potential unless the challenges that its society faces (as presented here) are not addressed.

Unfortunately, it is equally apparent that the ruling party is failing to effectively address these challenges. It is therefore crucial that the ANC is cognizant of the fact that unless significant inroads are made towards addressing the socio-economic challenges faced by the country, social unrest and protest will become an inextricable part of the government’s interaction with a significant proportion of society.

Moeletsi Mbeki is deputy chairman of South African Institute of International Affairs an independent think tank and is author of Architects of Poverty: Why  African Capitalism Needs Changing.