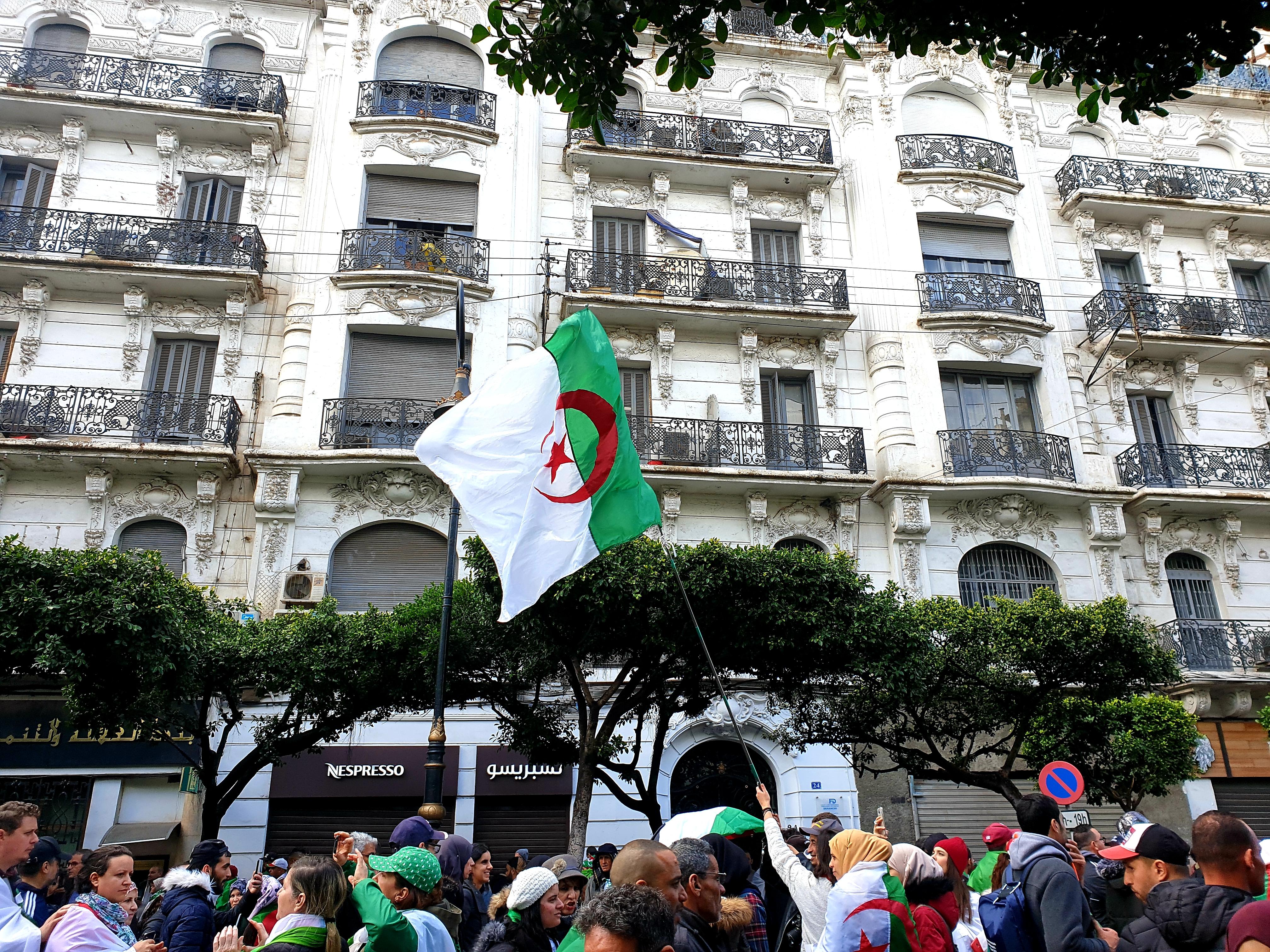 It all started just six weeks ago, on 16 February, with protests in the small town of Kherrata in eastern Algeria. Of all places, it had to be here to capture the symbolism of this “Algerian Renaissance”; Kherrata was one of three towns where the French massacred an estimated 45 000 people on 8 May 1945, giving impetus to the war that would eventually lead to Algeria’s independence in 1962.

From Kherrata, the protests quickly grew in numbers and presence. By 22 February, they had spread across all districts of the country. Protestors marched every Friday, reminded through messages on WhatsApp and social media that the demonstrations should remain Silmiya (peaceful). By 2 April, this unrelenting pressure from the streets had made President Abdelaziz Bouteflika’s position untenable. After 20 years in office, he resigned.

Why were the protesters successful? And where do we go from here?

No revolution happens in neat straight lines. It is a negotiation. The protests were triggered by Bouteflika’s announcement that he would run for a fifth term in the (now postponed) 18 April elections, but it was the nature of this movement that determined what followed and that will shape what happens next as we move to a transition period.

Algeria’s movement (Hirak) kicked off its campaign with two political demands: “no to a fifth term” and système dégage (“system, bugger off”, loosely translated). It was thus political from the start. The protests were not a response to price hikes or a specific instance of injustice. Rather, they had a clear target and clear demands: that Bouteflika and the system propping him up go. The political nature of these goals made it difficult for the establishment to respond quickly, as it had in previous years, by negotiating concessions such as subsidies or policy reforms.

Complicating things further was the scale of the Hirak. As of March, it was estimated to have mobilised 15 million people every Friday. These protesters emerged not just in metropoles such as Algiers but in every city from east to west, and from the Mediterranean coast to the far south. They counted among them every social and economic group, from rich to poor, and from the highly-educated to school drop-outs. In addition to the weekly Friday marches, individual professional groups also led their own protests: lawyers; student movements; university professors; architects; journalists, first from private media and then public media; and, for the first time in Algeria’s history, judges. Attempts to exploit ethnic identities (e.g. between Arab-speaking and Berber-speaking), a classic Bouteflika strategy, were massively rejected.

Interestingly, ideology did not play a role in the Hirak, helping it maintain its unity. This was unlike the protests in the early-1990s, which called for the establishment of an Islamic state, and preceded the electoral rise of the Islamic Salvation Front (FIS). By contrast, the Hirak focused on the notion of a Second Republic and insisted on rule of law. This republican character had one purpose: avoid creating an institutional vacuum and even risk plunging the country into chaos.

A crumbling house of cards

The nature and especially the size of the movement surprised the establishment. Algerians had come to be seen as docile by their leaders; a population, they felt, made up of a “lost generation” with no orientation and too divided to ask for change. In fact, the establishment was so confident that the president of the National Assembly (lower house of parliament), Moâd Bouchareb, responded to the 22 February protest by saying: “Bouteflika was sent by God in 1999…to those who want him gone, I say: sweet dreams and sleep tight”.

A few weeks of sustained pressure later, however, Algeria’s rulers began to panic. The first major proposal came on 3 March when Bouteflika promised to hold an “inclusive and consultative national conference” immediately after the elections. Consultations would focus on the country’s future direction and would form the foundation of a new constitution. He also promised to introduce policies to ensure the equal distribution of resources as well as specific measures to involve the youth.

The problem was that these promises were not new. In August 2012, months before his stroke, Bouteflika had given a speech declaring that his job was done and that it was time for a younger generation to take over. The promise to revise the constitution through a national dialogue had also been promised back in 2017.

Setting to tone for what would follow, the Hirak rejected consecutive proposals and reaffirmed the demand that Bouteflika and his entourage leave power.

At the same time, the movement penetrated further into labour unions whose leaders backed the president. Members of the largest trade union, General Union of Algerian Workers (UGTA), started challenging their leader who in one interview had looked to the sky when referring to Bouteflika as if he was god.

The same applies to the business sector, which realised change was imminent rather than necessarily being convinced of the desire for change. Among other things, its nervousness weakened the position of Ali Haddad, the head of the influential Forum of Business Leaders (FCE) and a key establishment figure who has captured state institutions to enrich himself. He has since been arrested trying to leave the country illegally.

Factions within political parties also started to break ranks. Four weeks into the protests, Bouteflika’s own party, the Front de Libération Nationale (FLN), declared its support for the movement and the need for change, but fell short of asking the president to leave. Members of the other coalition party, the Rassemblement National Démocratique (RND), also broke ranks with its leader, Prime Minister Ahmed Ouyahia.

The key defection, however, came from Lieutenant General Ahmed Gaed Salah, Algeria’s army chief and long-time Bouteflika ally. Feeling insecure about his position due to reported attempts of Bouteflika’s younger brother to sacrifice him in the process, Gaed Salah switched camps. On 26 March, he called for the Constitutional Council to declare Bouteflika unfit for office in line with article 102 of the constitution. A week later, he repeated his demand, this time also citing articles 7 and 8 which say “the people shall be the source of all powers”.

The way forwards from here is not yet clear, but not due to the lack of proposals.

The first is that the transition stays squarely within the constitutional framework. This would mean the current president of Council of the Nation (upper house of the parliament) taking over and elections being held within 135 days. This option has been widely rejected, however, as it is seen as a way for the establishment to keep hold of power.

The second option therefore is to operate outside of the limits of the current constitution. This would involve establishing a constituent assembly backed by the population and composed of independent trusted figures. Its task would, firstly, be to nominate the transition government. It would also conduct consultations with a view to drafting a new constitution and organise the presidential election.

The process through which its representatives would be nominated, however, is a point of contention. Some call for elections (as we did in 1962 and as did Tunisia in 2011) in order to ensure the establishment cannot hijack the process. But many do not trust the independence of the existing electoral system, especially if the vote is organised by the new government that Bouteflika nominated the day before his resignation.

Which option prevails depends on several factors. First is the role of the army. As it now stands, the army does not seem to have the appetite to manage the process and repeat the scenario Algeria found itself in in the early 1990s. Furthermore, calls for it to return to the barracks indicates that while opinion was divided on whether the army should take a stand in the protests, there is consensus that it should play no role in the transition.

The Constitutional Council, whose president is seen to be very close to the Bouteflika clan, will also play an important role. That body will determine the eligibility of the current president of the Council of the Nation, whose nationality has been questioned, to be interim president. The constitution is clear that the president of the republic (elected or otherwise) should not hold dual citizenship.

Finally, the shape of the transition period depends on how the Hirak organises. Until now, the movement was intentionally left decentralised to avoid it being undermined through attacks on its leaders, either by the government discrediting or arresting them. But the time now is ripe to move to Phase II.

With Bouteflika resigning it is clear that Algeria’s Renaissance has been ignited. For now, a representative constitutional assembly seems the only way to build on this and ensure a real transition. But until a genuine process is put in place, and aware that Bouteflika’s departure is just one stop on the journey, protesters are determined to keep marching every Friday.