Mining in the Republic of Congo: waiting for profits – By Madeline R. Young 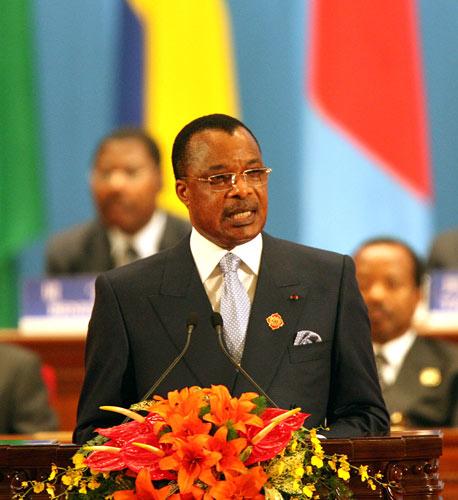 President Denis Sassou Nguesso has presided over expansion of the mining sector since stabilisation of the security enviroment has facilitated an increase in foreign investment in Rep. of Congo.

The Republic of Congo’s mining industry is developing swiftly following 50 years of uncertainty. During a recent interview, Jean Omer Mpeho, the Press Attaché of the Republic of Congo Consulate to the UK, explained that after independence and prior to the start of the civil wars of the 1990s, there were small-scale mining operations concentrated in the south-western Kouilou region and areas heavily influenced by colonial powers. Mining was not considered to be of great interest to the Congolese people at that time, given that profits from mining activities did not have a major impact on the Congolese economy. The modest revenues generated mostly went to foreign investors, although the industry did employ a fair number of local people.

Leading up to the civil wars, the country made moves to increase democratic governance by holding a National Conference in 1991 and moving towards a multi-party system. Unfortunately, this process lead to spiralling instability and subsequent civil wars from 1993-1999.  During this period, almost all government ministries effectively ceased to function. The petrol industry, however, continued to expand as during the conflicts it remained under French control.

Following successive civil wars between 1993 and 1999, the country is currently enjoying a prolonged period of relative political and economic stability under the leadership of President Denis Sassou Nguesso. The government has been working to diversify the Congolese economy away from oil dependency by developing the mining industry. With the publication of the 2005 Mining Code, Congo offered international investors and mining companies a flexible and attractive piece of legislation to encourage the development of mining projects. This government plan has attracted over 15 international companies to begin mining projects, investing millions of dollars into mineral exploration, with big discoveries of iron, potash, phosphate, and other minerals likely to lead to multi-billion dollar projects in the next decades. As a consequence, Congo is quickly becoming a hot spot for global mining investments.

While the scale of investment is impressive, it’s important to consider the financial dynamics and risks of mining exploration from the business perspective in order to understand the power-plays going on behind the scenes. Before companies are even able to starting thinking about mining, they must first invest massive sums of money into infrastructural development for years before any profits are made, with no guarantee of success. To date, none of the exploration companies have actually started mining, which means that they make no direct profits in Congo yet.

At this early stage in the development of Congo’s mining industry, there have been some rewards for the Congolese people. There is already a modest flow of funds from companies to the government, Congolese employees and local service providers during the exploration process for the payment of taxes, wages, diverse services, and the purchase of local goods. A number of mining exploration companies active in the country have worked together to promote international investments, bringing in many foreigners to conduct business and visit the country. This flow of people generates business for many industries such as hotels, restaurants, private property rental, public and private transportation, as well as office supply and construction services. Companies have collaborated with the Ministry of Mining and Geology to bring delegations to major mining events across the globe, increasing the network of contacts among government officials and opening commercial investment opportunities.

In December 2011, the Ministry of Mining and Geology was invited to London for the Mines and Money Conference, where it received second place, after Liberia, in an international competition to award the “Country of the Year” prize for most promising nation for mining investment. European, Australian, Chinese and African mining companies are making moves to establish themselves on Congolese soil.

Cominco Resources, a junior mining exploration company based in Pointe Noire, predicts that at its current rate of development it will be among the first companies to begin mining in 2014. CEO Roderick Smith underlines the fact that mining activities are a huge financial risk for international investors because so much money goes into the process before any profits are made. This means that governments and local populations must be patient in awaiting the real rewards and benefits of mining, just as all the international investors await their return on investments. This waiting game is understandably difficult for the Congolese government and people, as they witness companies develop their own infrastructure at a rapid rate without having seen significant rewards for the country.

Great sums of money seem to pass before everyone’s eyes, without the possibility of sharing the benefits. This can create tension among local populations who are eager to be a part of the development process they see happening around them. When companies transition from exploration to mining, there will be a big shift in financial terms, as they will begin to see profits after all the investments and years of work on their projects. They will also be in a position to start giving back to the communities that host their operations. Whether they choose to do so in an equitable, transparent manner is another question entirely.

Beyond the business aspects of mining development, there are also key political and social risks that the Congolese government must address. Across the African continent, countries such as Nigeria and neighbouring Democratic Republic of Congo have had major problems and widespread violence linked to the rapid, poorly regulated development of foreign money in solid and liquid mineral resources. The Ministry of Mining and other government offices such as the Ministries of Labour, Economic Development, Education and Environment need to work together to increase the national benefits and reduce the negative impact that a major boom in mineral exploitation will likely cause. With an economic shift to more natural resource exports, a country’s currency tends to suffer from inflation, making it harder for local people to purchase the basic goods they once could afford. Luanda, capital of oil-rich Angola, is a clear example of how local people have been priced out of normal living as the city has joined the ranks as one of the world’s most expensive places to live.

During an interview with Minister Pierre Oba at the African Mining Indaba conference in Cape Town in February 2012, he declared that the Ministry of Mines intentionally created the appealing and commercially accessible 2005 Mining Code in order to motivate international investment, a tactic that has clearly met with success. However, in spite of all the positive international attention, the Republic of Congo has not been entirely satisfied with the developments in mining to date. The Mining Ministry has the responsibility to ensure that the presence of these companies in the country serves the best interests of the Congolese people. There is a great deal of monitoring work to be conducted across all mining projects and the Ministry tries to perform all inspections of companies’ work despite the fact that it lacks staff capacity to carry out such processes effectively. The World Bank and the IFC have spoken about supporting capacity development, yet there have been no major international aid projects to date to help Congo develop its strength in this area.

With the growing momentum of mining investments, greater economic opportunities are coming for Congolese businesses and citizens who are strategic enough to connect with investors and foreign companies. Compared to the high level of human resources needed in the mining industry, the oil industry has been comparatively less beneficial to citizens in terms of employment. The mining industry has the capacity to generate up to 30,000 jobs during the construction and production phases, which would make the industry Congo’s biggest formal employer. Other industries like oil and forestry combined provide only up to 8,000 formal jobs. These upcoming changes in the Congolese job market will require careful oversight by the Labour Ministry and union organisations to ensure the best outcomes to avoid the kinds of labour abuses or conflicts that have lead to violent clashes at other mine sites across the world.

The mining industry has the potential to increase national GDP, increase standards of living, and create vast business opportunities for Congo’s citizens. Good management of the country’s mineral wealth will result in improved political governance of the country, improved infrastructure development that also respects the country’s fragile ecosystem (60 percent forest, with a high percentage of protected lands). Mining developments will contribute to Congo’s development only when companies collaborate with local residents to ensure that the people’s best interests are being looked after. Business needs versus local needs are often in conflict, for this reason the Congolese government and the Ministry of Mines must be a strong advocate for the rights and benefits of its citizens. If these conditions can be met, including careful monitoring of mining companies’ activities, Congo will see great economic and social development in the next 30 years. The Congolese people, the international minerals market and the global development community will be watching closely, hoping for the best outcome for all stakeholders.

Corruption: a global problem or an African ...