Congo: avoiding past pitfalls in a future peace deal with the M23 – By Judith Verweijen 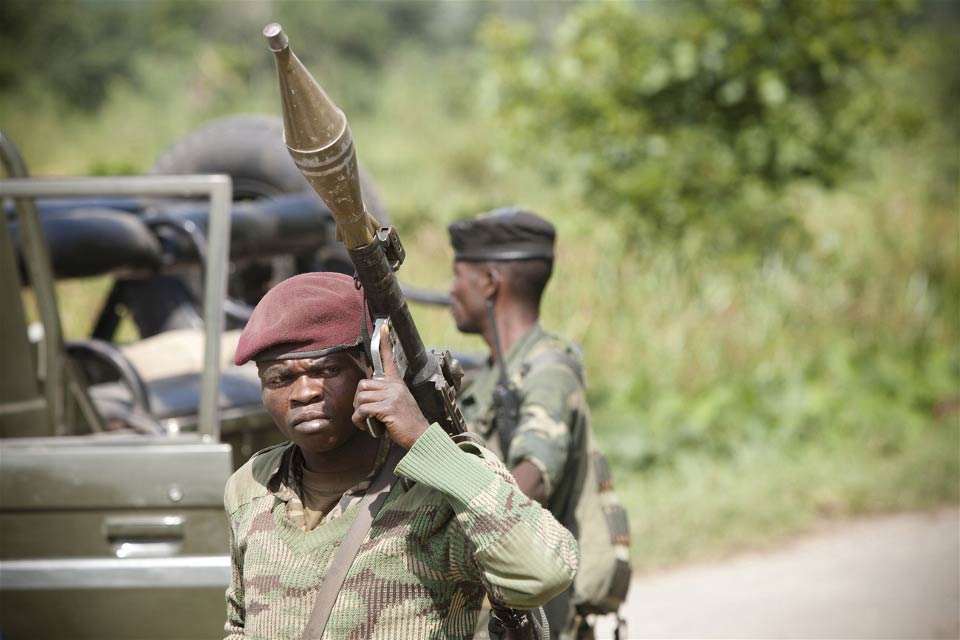 Any peace deal with the M23 must be political as well as military.

The recent fall of Goma has starkly highlighted the shaky foundations of the “˜peace architecture’ that was built in the wake of the Second Congo War (1998-2002). Briefly, it once again seemed that the entire house of cards would collapse, drawing in the wider complex of state and non-state actors that drive conflict dynamics in the Great Lakes region.

Although the situation remains volatile and renewed fighting is not to be excluded, the start of direct negotiations between the Kinshasa Government and the M23 rebel group offers hope that an all-out collapse can be averted.  However, there remains a risk that the need to end Kinshasa’s currently humiliating position will lead to hasty compromises that might mortgage the long-term prospects for a more stable east.

Previous negotiations with the M23’s “˜godfather’ – the CNDP – produced deals that did little more than temporarily patch up parts of the DRC’s fragile post-settlement architecture, failing to lay more solid foundations. The prospect that, this time, the compromise between a short-term end to hostilities and longer-term stability might be more successful looks rather bleak.

As was previously the case, the military balance of power is tilted in favour of the rebels, and Kinshasa’s diplomatic room for manoeuvre is small. Kabila had hoped to capitalise upon the M23 crisis by boosting his dented domestic and international legitimacy through playing the anti-Rwanda card, but this strategy has obviously failed. The recent nation-wide anti-Kinshasa demonstrations, the unruly behaviour of the FARDC, and the exposure of its Chief of Staff Amisi as heading an arms-trafficking ring, have all served to underscore the incompetence and unpopularity of his government.

The rebels, for their part, have attempted to gain a veneer of legitimacy by recasting themselves as a revolutionary movement with a broad basis of support. Only some time after its launch as a military mutiny, the M23 formulated a political agenda, first focusing on the implementation of the March 23 peace agreement and the grievances of the Tutsi community.

On the wings of its military successes, it then re-styled itself as a group advocating fundamental political reforms – as became clear from the list of demands voiced this week by Bishop Runiga, the M23’s political leader. Amongst other things, Runiga called for disbanding the Electoral Commission (CENI), freedom of movement for opposition leader Tsishekedi and the arrests of Generals John Numbi and Amisi.

Unsurprisingly, Kinshasa has dismissed these demands as a “farce” and rejected the M23’s call for broad peace talks that include the political opposition, civil society and the diaspora. On the one hand, the M23’s demands risk generating a diplomatic stalemate. On the other, they could be seen as an entry point for the construction of a more solid governance framework that might accommodate conflicting demands in a non-violent manner.

Much will depend on the diplomatic horse-trading currently taking place behind closed doors. Hopefully, the biggest aid donors to countries in the region will use their leverage over this process for the better, and not to protect long-standing ties with certain “pet statesmen”. In particular, they should ensure that any potential peace deal will avoid the pitfalls of previous peace processes.

In the following, I will discuss four of the root causes of failure.

Most previous peace agreements have  been essentially military deals, negotiated by military leaders and focusing on military issues.  The “˜political’ part has been little more than a sideshow. Although the M23 only progressively developed a political agenda, there is no reason to dismiss the grievances it now brings to the table. In particular, its calls for anti-corruption measures, more respect for civil liberties and democratic reforms, are concerns that are widely shared.

This agenda could be seen as hypocritical, as most vote rigging in the Kivus during the 2011 elections took place in areas controlled by the ex-CNDP,  and the latter’s leadership was involved in large-scale corruption and shady business dealings, while the M23 has shown to have a blatant disrespect for human rights in the areas under its control. However, given that these grievances are among the main causes for discontent with the current government, using them as a catalyst for change could ultimately contribute to stabilisation.

This also applies to the rebels’ demand for federalism for the Kivus. Whilst this is not presently politically viable, these demands could be met by making a long overdue start with decentralisation, the organisation of local elections and the development of the Kivus’ administrative infrastructure. Furthermore, efforts should be made to rescue the clauses of the March 23 Agreement that voice some long-standing concerns of the Tutsi community. These include  facilitating the return of Congolese refugees from Rwanda, the elaboration of a reconciliation policy and the creation of local conflict mediation committees.

Addressing these grievances will be more effective if the M23 are made partly responsible for their implementation. This will require their integration into the politico-administrative apparatus, including at the national level.

The past strategy of prioritising military over political inclusion has proven to be ineffective, as it did little to tackle the roots of violent conflict. Political representation, by contrast, will allow rebels to maintain their grievances on the political agenda and address them through high-level channels. Furthermore, it might give the wider political-economic network to which the M23 is connected a stake in making them remain committed to the agreements. This will not be feasible without pay-offs, but the challenge is to make these pay-offs less dependent upon the use of violence.

2. Dealing simultaneously with other armed groups and communities

Due to the complexity of conflict dynamics in eastern DRC, addressing one piece of the puzzle at a time has thus far proved ineffective. The peace deal concluded in 2009 with other armed groups was entirely overshadowed by CNDP integration. It is therefore unsurprising that several such groups eventually withdrew from the process, partly to protest the CNDP’s privileged treatment within the FARDC.

This allowed such dissident groups to reinforce mobilisation and popular support, thus contributing to further destabilisation. The laws of action and reaction in the Kivus make it likely that any agreements with the M23 will have wider repercussions, all the more so given their loose alliances to other groups.

There is no one-size-fits-all solution to the dozens of armed groups currently active in eastern DRC, and continuing to integrate them into the military does not appear to be a viable option.  Moreover, simultaneously signed agreements have tended to foster dynamics of competition, with each faction claiming equal rights to the most favoured group. Although armed groups are commonly projects of the elites of divided communities, in many cases they do voice concerns that the wider population identify with.

Inter- and intra-community tensions and armed group activity are interlocking processes, and both are again strongly interwoven with the way in which the national army operates. This makes it essential to address these components simultaneously. It may, once again, be possible to organise a Kivus-wide peace conference, as the M23 appears to have hinted at, but without repeating the mistakes of the 2008 Goma Conference.

This would necessitate inviting community delegations and local authorities (in place of armed groups) and avoiding doling out lucrative positions and generous per diems. It should then be up to the (civilian) delegates of such a conference to develop proposals for how to deal with the armed groups in their constituencies, and calculate whether demobilisation is a feasible option.

Earlier peace deals always involved the military integration of rebels. As I have explained in more detail elsewhere, both the terms of these integration deals and the way in which they were implemented eventually led to greater instability – they ended up rewarding those who took up arms, thus sending the message that insurgent violence pays.

A crucial part of this mechanism was the impunity granted to senior leaders suspected of war crimes and crimes against humanity, as well as the provision of pay-offs in the form of control over lucrative deployment locations.   If the decision is made to reintegrate elements of the M23 back into the FARDC, careful deliberation is needed to see how such detrimental effects can be mitigated.

Putting higher officers back into top positions in the Kivus will certainly send the wrong signal – in particular to current FARDC troops, including the part of the ex-CNDP that have remained loyal. Furthermore, it will deal a further blow to Kabila’s domestic and international legitimacy. However, the fact that Makenga and Baudouin Ngaruye (respectively commander and deputy-commander of M23) refer to themselves as “General” and the recent promotion of other officers to higher ranks, indicates that the M23 aims to obtain ranks and positions in the FARDC. It is therefore crucial to find a more balanced way of integration, for instance by spreading M23 fighters in an even manner among units, training these units before redeployment, and appointing top officers only to positions they are qualified for and outside of the Kivus.

Integration should also address the serious identity-based tensions that exist within the army. As long as Tutsi troops do not feel safe, specifically when deployed far from their home areas, they will continue to be susceptible to dissidence. Preventing this requires investment in the sensitisation not only of troops, but also of populations in deployment locations.

4. Credible sanctions for violations on both sides

One of the biggest obstacles to the implementation of peace agreements in the DRC has been the lack of credible sanctions for violations and delays. Peace deals have generally been half-implemented , andnon-respect has been facilitated by vague formulations and the absence of clear time-lines. Enforcement will continue to be a major challenge for any future peace deal, and it is precisely here that international actors could play a more pronounced role.

The UN Mission in the DRC (MONUSCO) must consider how far its role should include (threatening) the use of force. If anything, the latest crisis has demonstrated that the MONUSCO is not a credible player when it comes to deterrence and sanctioning spoiling behaviour. Either their mandate should be changed, or their contribution to implementation should be limited to monitoring and verification, technical and logistical assistance, as well as coordinating mediation and political pressure.

Such an emphasis on political instruments for enforcement is only possible if bilateral donors with more diplomatic leverage step up engagement and apply pressure where and when needed. These donors should stop using the UN as an easy scapegoat to mask their own lukewarm commitment to previous peace processes. An overall political solution to the crisis, however difficult to imagine in the face of current military realities, can only be possible if key diplomatic players put their full weight behind it.

As was painfully exposed by the fall of Goma, “˜engagement light’ will fail to address the complexities of the Great Lakes region.

Judith Verweijen is a PhD Candidate at the Centre for Conflict Studies at Utrecht University.