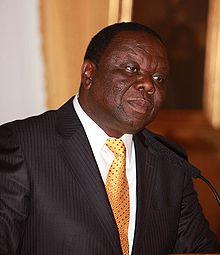 Morgan Tsvangirai has done much to stand up to ZANU-PF in Zimbabwe, but the MDC must not prevent democracy from penetrating its own internal workings.

The tendency of international statesmen to praise “˜the man of the moment’ through an awards system or complementary rhetoric is amongst one of the most endearing features of contemporary international politics. But sometimes international leaders get it wrong.  Zimbabwe’s Robert Mugabe was the quintessential “˜man of the moment’ who, even when he was commanding his cadres to carry out the 1983/84 atrocities in Matebeleland, was touted as a statesman whose administration was a model for other nations. As it turned out later, his formula for running the country – including the latter-day assault on democracy – proved to be too unconventional even for the “˜international community.’

International leaders now seem to be falling over each other to award Zimbabwe’s opposition leader, Morgan Tsvangirai (head of the Movement for Democratic Change [MDC]) with accolades in admiration of his courage in the battle for political hegemony in Zimbabwe. Though to some degree welcome (they might help intensify the recruitment of sympathy and support for his cause from the wretched local masses and the eager international community), such awards can also unwittingly give us an unrealistic sense of political certainty about what lies ahead.

The awarding of accolades would not be so contentious if they were attentively balanced with a deliberately active encouragement by international leaders of debate on Tsvangirai’s performance to date. Honest discussion of the immediate and current performance of the MDC leader whilst in opposition might help us develop a realistic imagination of a post–Mugabe era with Tsvangirai in power.

Taking the opportunity of the elections scheduled this year, let us examine Tsvangirai’s story as leader of the opposition, and try to understand the politician who is likely to occupy state house, come free and fair elections this June. The understanding that I humbly propose here, departs from the view that Tsvangirai is Zimbabwe’s version of Nelson Mandela. The intention of adopting such a view, hopefully, is to inject a refreshingly problematic understanding of the MDC leader.

I will start by acknowledging the profundity of my admiration for Tsvangirai. In particular, I revere his decision to sign on for what many initially regarded as a suicidal political fight against Mugabe, and his persistence in that mortal combat. This he has waged for most of the time against all odds and in the face of adversity that threatened his immediate family and even his physical existence. Indeed, I rank this decision as one of the bravest ever made by a Zimbabwean.

It is such spirited courage, coupled with a sense of inadequacy in most of us towards Tsvangirai’s relentless struggle against Mugabe, which understandably make it hard to pen even the most restrained criticism of his leadership. Not only does this entire business of being critical of the MDC leader induce uneasiness in the critic’s conscience, but talk of such kind often evokes, in some cases justifiably, biting remarks. The bearer of the critical mind can easily be accused of wittingly or unwittingly undermining the fight against democracy. Worse, he can be seen as a vulgar apologist for the existing regime.

I am not, however, confident that the removal of the authoritarian Mugabe regime necessarily means that democracy will have won. It may be a rejection of arbitrary rule, but then what follows might in some way resemble the existing political system.

I say so because to construct democracy requires genuine democratic efforts that must start from within the MDC whilst it is still in opposition, which judging from some of its current behaviour, appear not to be the case. Tsvangirai and his party have been gravitating towards undemocratic practices – this includes hostility towards criticism, the issue of Tsvangirai’s succession, and the MDC’s own political violence.

The MDC and its leader has developed an attitude redolent of ZANU – PF  in its attitude towards criticism. In recent years, increasingly, we have seen how they have become intolerably hostile to those who criticise them. For example, the response of its officials to a “˜slightly’ negative 2012 Report on MDC by Freedom House, a Washington based democracy research and advocacy organisation, indicates how irascible and unaccommodating the opposition party can be towards those whose views are contrary to what they want to hear. This behaviour is also personified by the party’s leader who has been known to become apoplectic when criticised particularly by his MDC–N rival, Professor Welshman Ncube (leader of the smaller breakaway faction of the MDC). Such an attitude is totally incongruent with democratic imperatives.

Most serious, the issue of Tsvangirai’s succession has been stonewalled each time it is raised within the party or on the public forum, exposing the limitations of democratic processes within the MDC. On this matter, the MDC leader reminds me of Dickens’s Mrs Jellyby in Bleak House, worrying about the democratic miseries of the nation, while ignoring the shrieks for change from under his window. Indeed, on this matter, Tsvangirai could do with a dose of humility before demanding of Mugabe at national level, what he is resisting within his party.

When questioned on the matter, a case is made by those fiercely loyal to Tsvangirai to justify his undemocratic continuation as the leader of the party, which unfortunately, or significantly – or both – many of his followers seem to have rushed to embrace. The argument by the loyalists, is that no one within the party is popular enough to challenge Mugabe at national level. The loyalists contend that the removal of Mugabe subordinates any changes that might be needed within the party, in particular, democratic elections of a new leader. In other words, the fate of the party is seen as intertwined with that of its leader, and Tsvangirai is seen as indispensable to the party.

One official told me that senior members within the party would rather prefer Tsvangirai as its leader in comparison to Tendai Biti, the party’s powerful Secretary General and potential challenger to the MDC leadership. These senior officials, according to my source, see Tsvangirai as a saint, who at times comes across as affable and devoid of intellectual abilities; hence the assumption is that that he will be easy to manipulate in office.

However, this thinking, if at all true, seriously underestimates the man. The truth is that the MDC leader is no small fry politician. He is a tough leader who was head of the most powerful trade union in Zimbabwe for 10 years before he joined politics. We also easily forget that to lead a party that fights Mugabe, and to stay as head of that party for 14 years, you have to be ruthless. Tsvangirai’s personality, in particular his courage, leaves no doubt in my mind that he is a man who understands the art of power, and knows how to use it.

The past year was a season of political silliness in which the MDC leader made a spectacle of himself. His antics in bed not only gave us a glimpse of his character, but also showed how politically ruthless he is. With all the scandals, one would have at least expected whispers of regicide, with pretenders to Tsvangirai’s throne firing some warning shots in his direction. But in the name of party unity, almost every official played down these antics, and rehearsed the same litany that the sex scandals (which left a string of heart broken women) were a private matter that has no bearing on Mr Tsvangirai’s abilities as the leader of the party.

Such an unhelpful consensus not only indicates a lack of independent thinking and constructive criticism, but more importantly, shows Tsvangirai’s impressive ability to chill disquiet within the party. We shouldn’t forget that in 2010 the MDC leader peremptorily dismissed party stalwarts Elias Mudzuri and Fidelis Mhashu from the Cabinet, a move described as handiwork strategically undertaken to act as an absolute warning to those within the party that trouble was unwelcome. This purge must not have been far from the minds of MDC officials, including adversaries within the party, when they lined up in support of their leader.

The MDC claims that nonviolence is at the centre of its democratic ethos. Though I would not go as far as the MDC–N leader, Welshman Ncube to say the MDC is a violent party, but that on occasion, the party has exhibited some violent tendencies (see here also). What is most disturbing is that claims of violence apparently perpetrated by the MDC have mostly been dismissed as heresy and fallacy by the party.

In cases where, faced with insurmountable evidence, with fine contempt, the MDC has rationalised this violence by arguing that ZANU–PF started or fomented, even intra – party violence. Such lowering of the democratic threshold by a party that loudly talks about democracy is indeed worrying. The disturbing images of a savagely beaten MDC–N’s senator Trudy Stevenson, allegedly by MDC youths in 2006, shows how lacking in tenderness the MDC can be towards its adversaries.

I will close by saying that I might turn out to be just another naysayer who got it entirely wrong. But I also say it’s worth taking a moment to ask ourselves the question; With all that “˜democratic bungling’ so far by a man who wants to bequeath democracy to the masses, should we be counting on Tsvangirai suddenly getting it right once in office?  It is not too late; The MDC leader and his party have to make that hard transition themselves before they can attain that transition for Zimbabweans. But if they continue on this trajectory, then no–one can guarantee democracy in the post–Mugabe era.