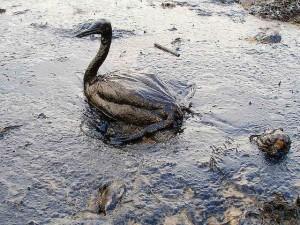 Ever since Nigeria’s first oil find at Olobiri in 1956, the question of who should benefit and pay for the costs and consequences of oil production has been a contentious issue; often with little consensus amongst the key players – namely the Nigerian government, the oil companies, and the various communities affected – on who spilled what, where and when. Dealing with such a hornets’ nest of interests has often seemed insurmountable, yet a bill before Nigeria’s assembly and president seeks to change the situation.

Senator Dr. Bukola Saraki, a former governor of Kwara State, and currently the Chairman of the Senate committee for the environment, has tabled a bill aimed at strengthening the regulatory and institutional power of NOSDRA (National Oil Detection and Response Agency) – one of the agencies responsible for cleaning up oil spills in the country. His proposed bill and the contentious issue of who is responsible for cleaning up oil spills in the Niger Delta was the subject of a meeting held by the Royal African Society on Tuesday, 26th February at the offices of the law firm TLT. The panel included presentations by Senator Dr. Bukola Saraki; Barnaby Briggs, Strategic Relations Manager for Shell International; Nike Olafimihan, Head of Legal at Shell Petroleum Development Company of Nigeria (SPDC), and Joseph Croft, Executive Director of the Stakeholder Democracy Network, a UK based charity with offices in Port Harcourt, Nigeria.

Senator Dr. Bukola Saraki argues that the lack of attention to oil spills in the Delta is part of the wider sense of impunity pervading the Nigerian polity, admitting that there has been a lack of political will to ensure that profit making from oil is balanced with appropriate care for the environment and the livelihood of Delta communities. He concedes that Shell and other oil companies are acting within existing but inadequate legislation. Saraki wants to make NOSDRA a stronger agency, and increase the current minimum penalty for oil spills in Nigeria to reflect international standards, citing the billions of dollars BP has paid for the Deep Water Horizon explosion in the United States as an example.

Shell, the international oil company, which has become a lightning rod for bad corporate behaviour in Nigeria, says the picture is more complicated. 70% of the oil spills, according to Barnaby Briggs, are caused by oil bunkering and illegal tapping of the pipelines. Joseph Croft, from Stakeholder Democracy Network, gives short shrift to the idea that oil companies can do little about oil bunkering; it is a major problem, he says, but the oil companies don’t switch off the pipes even when there is clear evidence of oil being siphoned illegally, and in some instances, sustained substantial damage being done to pipelines.

For its part, Shell says its operations in the Niger Delta, run by the Shell Petroleum Development Company of Nigeria (SPDC) are in partnership with the Nigerian government, which receives 95% of its profits; Shell’s operating structure in Nigeria raises the question of whether oil companies are less circumspect in their operations in the delta because they have less control, or because of a culture of impunity in the country.

Nike Olafimihan, Head of Legal for SPDC, describes Senator Saraki’s proposed bill as flawed, saying it was unconstitutional and would add more confusion to an already ineffective regulatory framework. NOSDRA, Oafimihan says, is one of several competing laws and agencies tasked with regulating oil spills in Nigeria, including National Environmental Standards and Regulations Enforcement Agency [NESREA], along with NOSDRA, under the Ministry of the Environment, and the Ministry of Petroleum Resources, with its regulator the Department of Petroleum Resources [DPR], and the national oil company, the Nigerian National Petroleum Corporation [NNPC].

Joseph Croft argues that this confusion of regulatory bodies should be resolved by the creation of a super agency, perhaps by strengthening NOSDRA as an entity that both responds to oil spills and regulates the industry to prevent them in the first place. Whether Senator Saraki’s bill will achieve this is not clear, though it has passed a first and second reading in both houses of assembly.

SPDC Legal Counsel, Nike Olafimihan, wants to see better regulation of oil spills but not through the creation of punitive measures, which may also conflict with existing legislation. Olafimihan says SPDC already incurs great costs as a result of oil spills, both reputational as well as financial. In many instances, the agencies already created don’t have the resources to enforce or implement their mandate – she cites the case of a recent oil spill which her company and NOSDRA had to deal with by hiring equipment from Ghana, a relative newcomer to the oil industry. For his part, Senator Saraki says NOSDRA is too close to the oil companies and lacks independence, sharing an account of his visits to some spill sites, and the revelation that the only way for him to visit many of the spillage sites was to be taken their by Shell representatives.

Senator Saraki maintains his bill is motivated by a damascene conversion from being the governor of a farming state, Kwara, with little appreciation of the gravity of oil spills in the Delta, to witnessing the problem first hand as chair of the senate committee on environment. Nevertheless, whilst Senator Saraki’s Bill has re-opened the debate on oil and its effects on the Niger Delta, whether the Nigerian government and the oil industry have the political will to reach a concensus and change the status quo remains to be seen.